TELEVISION: Halloween is here with these creepy crawly shows 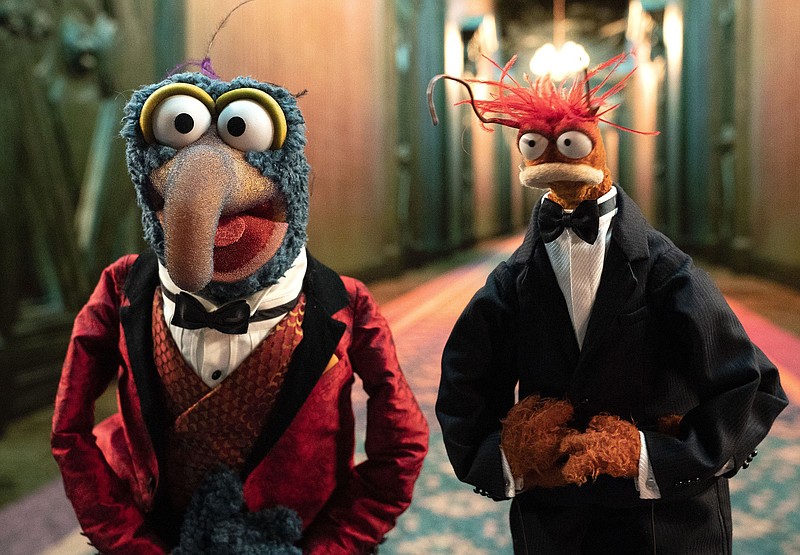 The Muppets are starring in their first Halloween special, “Muppets Haunted Mansion,” streaming on Disney+. With a cast of colorful Muppet characters, (and some cameos) the story finds Gonzo, and his pal Pepe the Prawn doomed to spend the night in the haunted mansion. (Courtesy Disney+/TNS)

It's that dark and stormy time of year again when things actually go bump in the night, ravens start tap, tap, tapping and scary monsters take a 10-month lease under your bed.

Of course, TV is armed for the onslaught of Halloween with more choices than you can shake a witch's broom at.

"The Simpsons" have returned on FoxNow and Hulu with that endless treehouse and its writhing limbs of terror on "Treehouse of Horror XXXII," this time in five segments. One of the chapters emulates Edward Gorey's deco animation and details Bart's evil deeds throughout the year.

Jamie Lee Curtis is back as the indefatigable Laurie Strode in her vendetta against the vicious Michael Myers in the latest incarnation of the "Halloween" legacy, "Halloween Kills," streaming now on Peacock. This time it's not only Laurie, but her daughter (Judy Greer) and granddaughter (Andi Matichak) who are threatened by this unrelenting tormentor.

Spookmaster Svengoolie will spin "Frankenstein Meets the Space Monster," on Saturday via MeTV. The nostalgia network will also feature Halloween segments from now-classic series like "Leave It to Beaver," "The Carol Burnett Show" and "M*ASH" the entire creepy weekend. And it will serve a gaggle of unnerving Looney Tunes on its morning show, "Toon in with Me."

Paramount+ casts its spell with its next "Paranormal Activity" film, "Next of Kin," arriving Friday. This is the haunting tale of a young woman who seeks info from an Amish community only to realize that something evil may be lurking under their pristine kapps.

Even the Science Channel goes civilian with its search for the "Lost City of the Monkey God," premiering Sunday. Tales of this mystical city have disturbed scientists and explorers for eons. Buried deep in the rain forest of Honduras, the "Lost City" documentary follows explorer Steve Elkins and a team of scientists in their quest to unearth this unearthly treasure.

R.L. Stine's graphic novel is the source of the Disney+ series, "Just Beyond," complete with eight eerie episodes. Each one dives into a fresh story with new characters who must travel a dark and perilous journey of discovery complicated by aliens, ghosts and witches.

Mira Sorvino and AnnaSophia Robb co-star in a sci-fi thriller, "The Expecting" arriving Friday on Roku.

Of course, TCM has littered the entire month with classic horror flicks including Bela Lugosi's "Dracula" at 9:45 p.m. Friday, "Frankenstein" at 8 p.m. on Saturday, "Night of the Living Dead" at 10 p.m., Jacques Tourneur's 1942 classic, "Cat People" at midnight Sunday and the ultimate shocker, Hitchcock's "Psycho," at 8 p.m. Sunday.

USA and Syfy are sharing that adorable doll from our past, "Chucky," and an all-new eight-episode series that finds him limp and harmless at a yard sale (at first). Chucky made his initial appearance back in 1988 in "Child's Play" and has been haunting audiences ever since.

If you're curious about the devious minds behind the creatures of the night you might want to watch the weekly documentary "Behind the Monsters," beginning on Shudder Friday. Each of the six episodes delves into one monster including Chucky, Michael Myers and Freddy Krueger, and will talk with the people who created these characters, including the actors, directors, stunt people and special effects personnel.

And for the kiddies, the Muppets are starring in their first Halloween special, "Muppets Haunted Mansion" streaming on Disney+. With a cast of colorful Muppet characters, (and some cameos) the story finds Gonzo, and his pal Pepe the Prawn doomed to spend the night in the fabled — you guessed it — haunted mansion.