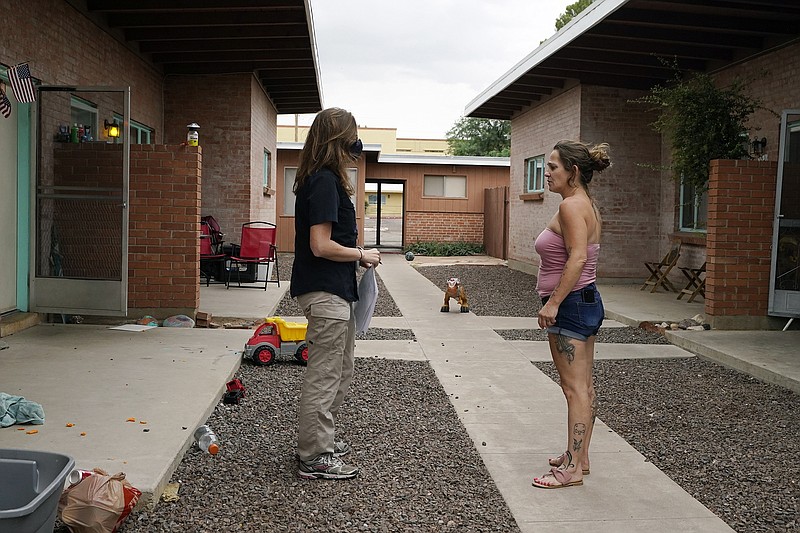 Pima County Constable Kristen Randall, left, speaks to a rental resident letting them know about their eviction notice Friday, Sept. 24, 2021, in Tucson, Ariz. Long delayed evictions are rolling out more than a month after the end of a federal moratorium that had protected tenants, including some who hadn't paid rent for many months during the coronavirus pandemic. (AP Photo/Ross D. Franklin)

The amount of emergency rental assistance reaching tenants and landlords grew slightly from August to September, but the Biden administration, and state and local programs, continue to struggle getting money out the door, especially in the absence of renter protections from a federal eviction moratorium.

All told, Congress appropriated $46.5 billion for emergency rental aid between two aid packages. Of the $25 billion appropriated in December, roughly $10.3 billion has gone out the door. A March relief package provided the other $21.5 billion. Almost $367 million of that bucket had been spent through September, according to Treasury. The top-line figures have ticked up each month, but there has not been the marked ramping up of spending that officials at the White House and Treasury had hoped for.

The Biden administration insists that if programs would implement its rules designed to make it as easy as possible for people to apply for aid, this mammoth relief program would build more momentum. But there appears to be an ongoing disconnect with states and cities nationwide that are fundamentally responsible for getting those payments into peoples' pockets in time to prevent an eviction.

No one is satisfied. Yet at the same time, officials are grappling with whether the buckets of money Congress allocated to states and cities ended up being mismatched to the level of need.

An eviction moratorium put in place by the Centers for Disease Control and Prevention last year was intended to keep people in their homes during a public health crisis and economic recession. The Biden administration hastily enacted a final moratorium in August, in part to give programs more time to get aid out the door. But when the Supreme Court struck down that ban a few weeks later, housing advocates and government officials feared a flood of evictions that could swell to a national homelessness crisis.

Yet that grim nightmare has not materialized, and experts are conflicted over reasons. It's possible some courts are still severely backlogged. In some areas, the eviction moratorium did little to slow filings anyway. Some tenants may have moved on their own to avoid eviction.

Administration officials credit emergency rental assistance and say the aid can go further if programs aren't inundated with a crush of applications all at once.

"There's no question that the 2 million payments [so far], and the path to 3.5 million payments in 2021, is making a meaningful difference in preventing the feared surge in evictions, but it is still not good enough," said Gene Sperling, who is leading the rollout of the American Rescue Plan at the White House. "Every preventable eviction is a preventable heartbreak and even with the stronger performance, we know if we don't do better nationwide, hundreds of thousands of families will still unnecessarily face that painful eviction, or risk of eviction."

But even those figures don't change persistent frustrations that state and local programs aren't easing their application rules, or show little interest in improving their systems at all. By law, the rental assistance program directs Treasury to start reallocating "excess" first-round funds, which would allow them to move money from lower-performing programs to those that are leading the pack, for example. That process will soon be underway.

"We anticipate implementing the reallocation process over a period of time, with escalating consequences if a state or locality fails to demonstrate progress in using its [first-round] funds or implementing the flexibilities Treasury has made available," Deputy Treasury Secretary Wally Adeyemo wrote in a letter to grantees in September.