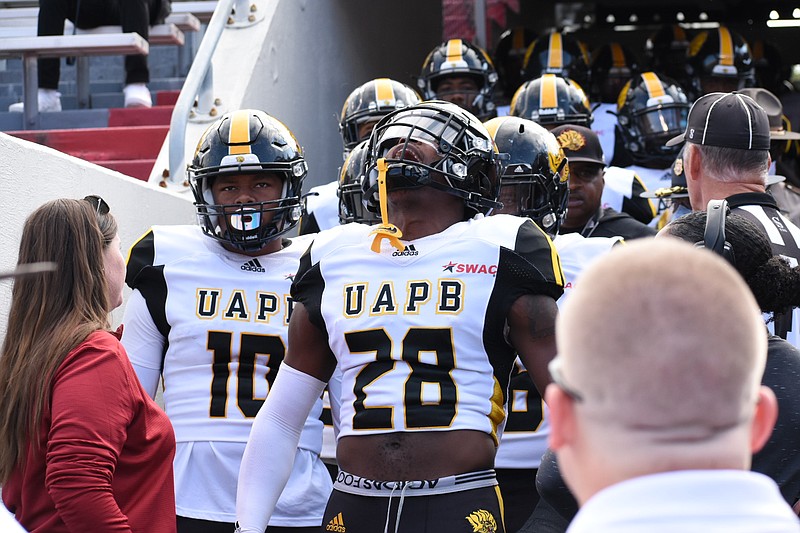 Instead, the Razorbacks did as expected at their home away from home -- War Memorial Stadium in Little Rock -- and scored early and often on the way to a 45-3 win Saturday.

"Proud of our guys," Golden Lions Coach Doc Gamble commented Monday during the Southwestern Athletic Conference coaches' Zoom meeting. "We answered the bell, especially in the second quarter. There wasn't any letdown. The guys fought. We actually were able to move the ball against a bigger opponent."

UAPB (1-6, 0-4 in SWAC) could boast two significant categorical wins Saturday. The Lions held the ball for 36 minutes, 18 seconds, in a game that was reduced to 54 minutes after Arkansas (5-3, 1-3 Southeastern Conference) built a 45-0 halftime lead, but then UAPB pitched a second-half shutout and got on the board with a Zack Piwniczka field goal in the final quarter.

"The speed of the game wasn't a big factor for us," Gamble said. "The size was as expected. But we still were able to move the ball and make some stops at times. If you take away the second quarter [when Arkansas outscored UAPB 28-0], we would have been even more so in the game."

His team reportedly received $600,000 from the first Razorbacks game against an in-state opponent since 1944.

Quarterback Skyler Perry was held to 7-of-18 passing for 107 yards with one interception. Gamble said the fourth-year starter showed some positive signs in his play after a difficult stretch in SWAC action. Perry ran 11 times for 27 yards.

Perry has completed 82 of 179 passesfor 934 yards and two touchdowns, with four interceptions. During a five-game spring season, the second-team All-SWAC selection racked up 1,236 passing yards and 13 touchdowns on 102-of-178 passing with six picks.

"We're just looking for a little more consistency from him and we're just trying to get him back to where he was in the spring," Gamble said. "He showed some glimpses of that this Saturday. He played with some real good toughness. He ran the ball very well. He didn't look like he was panicking like he had been in the past couple of games prior to this one. We're just looking forward to him getting back to the old Skyler. I'm always joking around, trying to keep a smile on his face, but maybe I need to stop giving him so many interviews; he's starting to feel a little weight on his shoulders, a little bit.

"He settled in this past week a little bit and played really well. He played like a guy who deserved to be on the field, I'll tell you that. Not to put everything on him; some other guys have to step up and play better as well."

Through the entire week, Gamble was plotting how the Lions -- despite their losing skid now at six -- could take advantage of matchups and play better than it had in recent weeks against an SEC team on the rise despite having to overcome three straight losses of its own.

"The thought was to try to get it to the fourth quarter and keep it close and let the pressure be on those guys," Gamble said. "We improved. We led with the time of possession, which was another good sign for us. We didn't turn the ball over a whole bunch. We did have two interceptions.

"It was a great day for the state of Arkansas as well. We had a big-time crowd, and we didn't flinch. We played the best we could against a really good opponent."

Asked about his condition Monday, Gamble said Treadwell has returned to the team and is doing well after stepping away due to an undisclosed illness.

"He was out on a -- not to get into his personal stuff I don't want to divulge -- but he's back with us," Gamble said. "He's back in the building, and we're happy to see him back. He was out with an illness."

Treadwell, a former Miami University (Ohio) head coach and Michigan State University offensive coordinator, has been on the UAPB staff since October 2020. It was not clear how long he had stepped away.

As the city of Houston celebrates another Astros trip to the World Series, downtown will still be active Saturday when Texas Southern University (2-5, 1-3 SWAC) hosts UAPB at BBVA Stadium. Kickoff is set for 2 p.m., hours before the Astros bat first in Game 4 against the Atlanta Braves in Georgia.

Texas Southern had shown promise of turning around an 0-3 start after shutting out new crosstown opponent North American University during an on-campus homecoming game and edging Southern University 35-31 in Arlington, Texas. But the Tigers have dropped their last two, at Grambling State University and at home against Alcorn State University, by 14 or more points.

"Two teams trying to find a win moving forward; that's a similarity," Gamble said. "Texas Southern has shown an ability to score some points, and we're looking to get back in an explosive offense that we have been in. They're pretty good on defense, and their quarterback play is getting better each week."

"He's understanding a lot more what we're asking him to do a lot better," third-year Tigers Coach Clarence McKinney said of Body. "He's gaining experience with each game, and he becomes a much more improved quarterback. He has the ability to run around and keep plays going, and we just look forward to seeing him grow in the position."