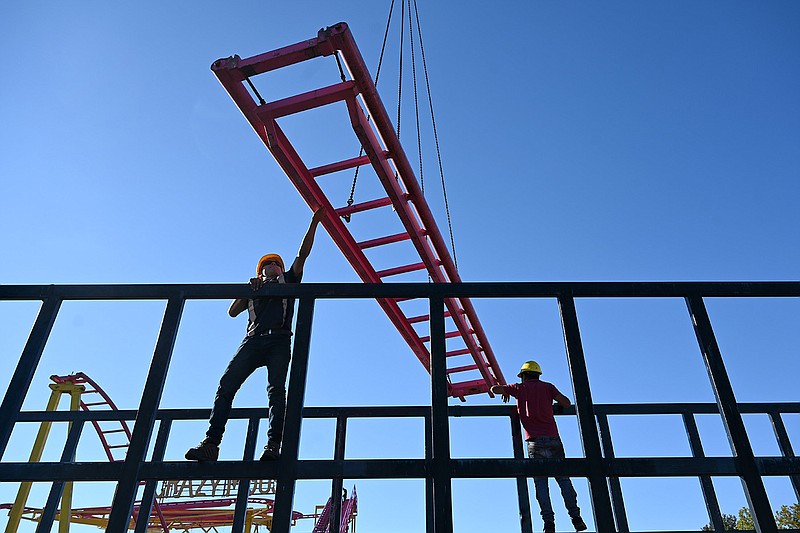 Crews work to deconstruct rides on the Midway after the close of the Arkansas State Fair on Monday, Oct. 25, 2021. This year had the largest attendance numbers in the fair's history. (Arkansas Democrat-Gazette/Stephen Swofford)

The Arkansas State Fair set an attendance record, breaking a mark that held for six years.

State Fair organizers credit a desire from the public to return to normal activities and a new marketing strategy as the reasons for this year's record-breaking number of attendees. But the biggest reason for the fair's success, they said, was the good weather.

"It wasn't hot weather, it wasn't cold weather, it was fair weather," Anne Marie Doramus, the interim general manager of the Arkansas State Fair. "So really, all the stars aligned all at once and it benefited us."

For many, the State Fair is an annual event, one of many things interrupted by the pandemic. While the Livestock Show was held last year, without spectators, last year's cancellation of the State Fair was the first hiatus it took in 75 years, when it was canceled because of World War II.

"The Fair is simply just a tradition that people enjoy going to, so I think people were ready to get back to it and enjoy it," Doramus said.

Perhaps the biggest draws for this year were concerts, which included performances from Riley Green, Maddie & Tae, Blackberry Smoke and Bone Thug-N-Harmony. Oct. 23 was the biggest draw of the 10-day fair with 97,566 attendees, breaking a record for one day, set only a week prior.

It was the first time the Razorbacks had played an instate team in 77 years. This year's State Fair tried to bank off all the Razorback and Golden Lions fans making their way to Little Rock by offering half-priced entry into the State Fair for those who had a ticket stub from the football game.

"We encouraged people to come to Little Rock and make a day -- a full day in Little Rock," Sawyer said. "Go to the shops downtown, go to the game, come to the fair. There was definitely something for everybody on that Saturday."

This was the first year running the marketing campaign for the fair for the Little Rock-based GWL Advertising. Sawyer said the television spots were more inclusive of all the fair's activities, trying to hit an audience with wider interests with a succinct slogan of "See y'all there."

With the covid-19 pandemic still ongoing, Vaccinate Arkansas hosted a vaccination clinic during the State Fair. Organizers said they could not provide estimates for how many people received a shot at the fair, but Doramus said the total was not a "significant number."

"You know, all we can pray for is really good weather for next year as well," Doramus said.