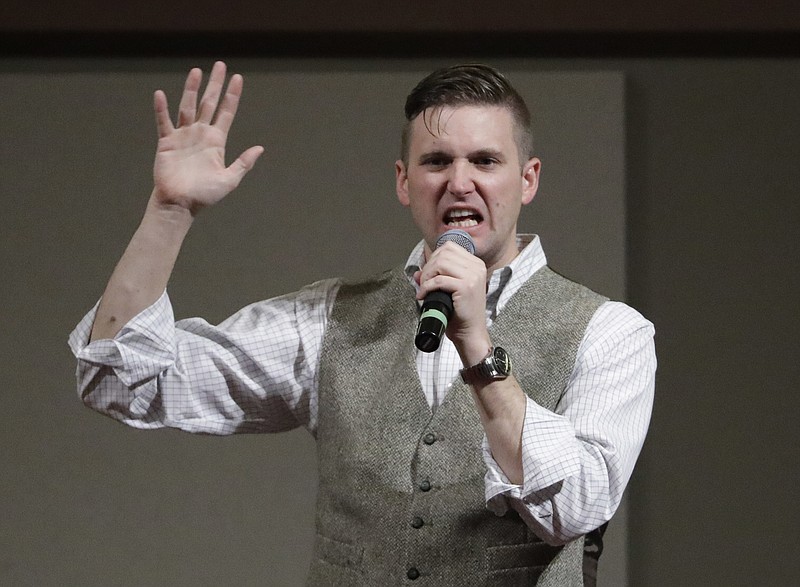 FILE - In this Dec. 6, 2016, file photo, Richard Spencer, who leads a movement that mixes racism, white nationalism and populism, speaks at the Texas A&amp;M University campus in College Station, Texas. A trial is beginning in Charlottesville, Virginia to determine whether white nationalists who planned the so-called &#x201c;Unite the Right&#x201d; rally will be held civilly responsible for the violence that erupted. (AP Photo/David J. Phillip, File)

RICHMOND, Va. -- The violence at the white nationalist "Unite the Right" rally in Charlottesville shocked the nation, with people beaten to the ground, lighted torches thrown at counterdemonstrators and a self-proclaimed Hitler admirer ramming his car into a crowd, killing a woman and injuring dozens more.

The driver of that car is serving life in prison for murder and hate crimes. Now, more than four years later, a civil trial will determine whether the neo-Nazis and white supremacists who organized the demonstrations should be held accountable as well.

Jury selection began Monday for the trial in U.S. District Court in Charlottesville, which is expected to last a month.

The lawsuit was funded by Integrity First for America, a nonprofit organization formed in response to the violence in Charlottesville with the goal of disarming the instigators of violence through litigation.

It accuses some of the country's most well-known white nationalists of orchestrating a "meticulously planned conspiracy" to commit violence against Black people, Jewish people and others based on race, ethnicity, religion and sexual orientation. A firestorm started after then-President Donald Trump failed to strongly denounce the white nationalists, saying there were "very fine people on both sides."

Hundreds of white nationalists descended on Charlottesville on Aug. 11 and Aug. 12, 2017, ostensibly to protest city plans to remove a statue of Confederate Gen. Robert E. Lee.

The nearly two dozen defendants include: Jason Kessler, the rally's main organizer, who terms himself a "white civil-rights" leader; Richard Spencer, who coined the term "alt-right" to describe a loosely connected band of white nationalists, neo-Nazis and others; and Christopher Cantwell, a white supremacist who became known as the "crying Nazi" for posting a tearful video when a warrant was issued for his arrest on assault charges for using pepper spray against counterdemonstrators.

The plaintiffs include four people who were hurt when James Alex Fields Jr. rammed his car into a crowd of counterprotesters.

The case is built on a vast collection of chat room exchanges, social media postings and other communications in which the defendants use racial epithets and discuss plans for the demonstrations, including what weapons to bring.

Lawyers for the plaintiffs are relying on a 150-year-old law passed after the Civil War to shield freed slaves from violence and protect their civil rights.

Commonly known as the Ku Klux Klan Act, the law contains a rarely used provision that allows private citizens to sue other citizens for civil-rights violations. To win a judgment, the plaintiffs must prove the defendants conspired to commit racially motivated violence and planned it in advance -- and that the plaintiffs were injured as a result.

"It's the only case that really takes on the leadership and organization of the white supremacist movement," said Karen Dunn, one of the lead attorneys in the lawsuit.

The plaintiffs' attorneys say they've amassed 5.3 terabytes of digital communications by the defendants, including many on the online platform Discord initially leaked by Unicorn Riot, a left-leaning media collective.

The lawsuit alleges there were "countless exhortations to violence" on Discord, including one by a defendant who allegedly wrote: "I'm ready to crack skulls," and another who wrote: "It's going to get wild. Bring your boots."

But the white nationalists named as defendants claim talk of weapons and combat was meant only in the event they had to defend themselves from counterprotesters. They argue their communications are protected by the First Amendment.

"You can say any nasty thing you want about any person or group you want and that is protected by the First Amendment. That is not me saying that, that's the Supreme Court," said W. Edward ReBrook IV, an attorney for Jeff Schoep, the former longtime leader of the neo-Nazi group the Nationalist Socialist Movement and one of the defendants.

Spencer, who is representing himself at trial, told The Associated Press he did not help plan the event and took no part in any conspiracy to commit racially motivated violence. He said he is looking forward to telling his story to the jury, noting emotions still run high over the events in Charlottesville.

"I feel also that people don't have a sense of closure about Charlottesville so in some way they want to achieve a certain kind of purging a bad feeling, they want to engage in what is effectively scapegoating," Spencer said.

Elizabeth Sines, the lead plaintiff, said she's still haunted by the violence she saw that weekend, including Fields plowing his car into the crowd.

"It has changed who I am forever," Sines said in a statement released by her attorneys. "The organizers of the Unite the Right rally robbed me of my ability to feel safe, feel secure, feel at ease -- even in my own home."

The lawsuit seeks unspecified monetary damages and a judgment that the defendants violated the plaintiffs' constitutional rights. 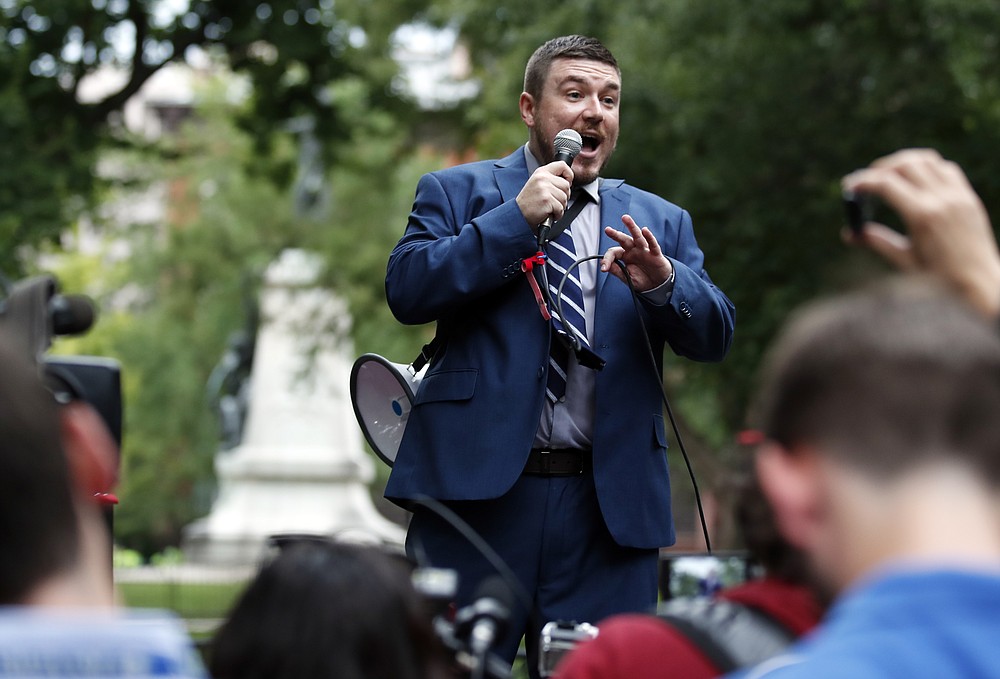 FILE - In this Aug. 12, 2018 file photo, White nationalist Jason Kessler speaks at a rally near the White House on the one year anniversary of the Charlottesville &quot;Unite the Right&quot; rally in Washington. A trial is beginning in Charlottesville, Virginia to determine whether white nationalists who planned the so-called &#x201c;Unite the Right&#x201d; rally will be held civilly responsible for the violence that erupted. (AP Photo/Alex Brandon, FILE) 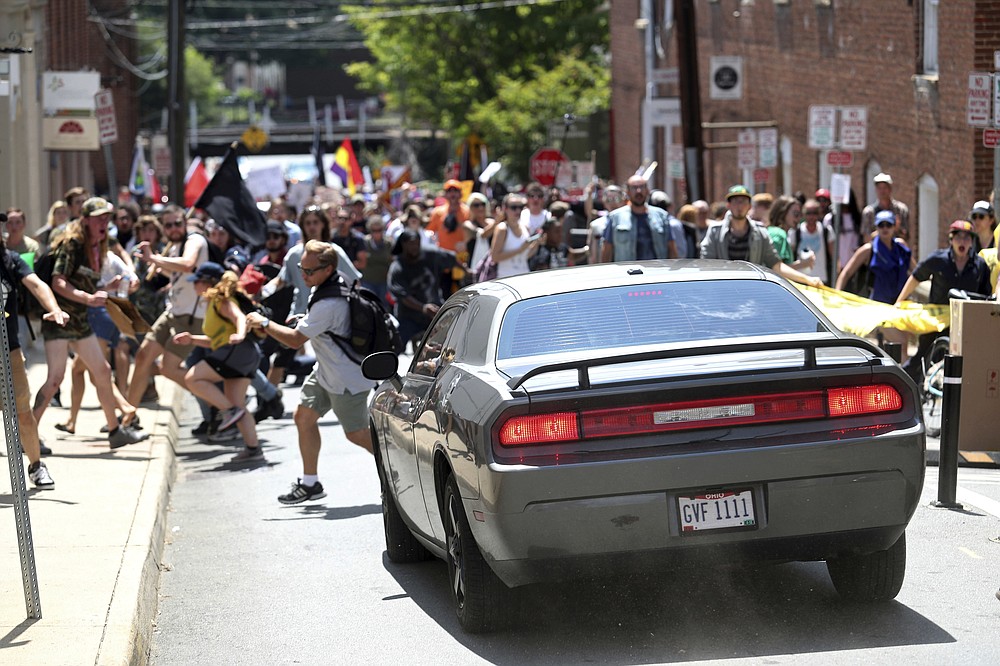 FILE - In this Aug. 12, 2017, file photo, a vehicle drives into a group of protesters demonstrating against a white nationalist rally in Charlottesville, Va. A trial is beginning in Charlottesville, Virginia to determine whether white nationalists who planned the so-called &#x201c;Unite the Right&#x201d; rally will be held civilly responsible for the violence that erupted. (Ryan M. Kelly/The Daily Progress via AP, File) 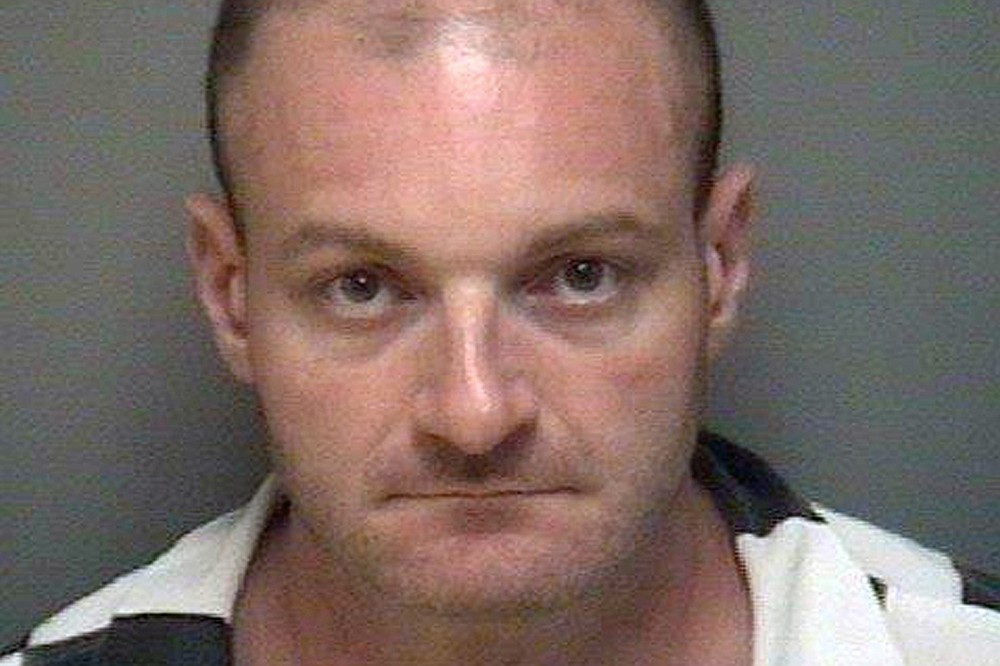