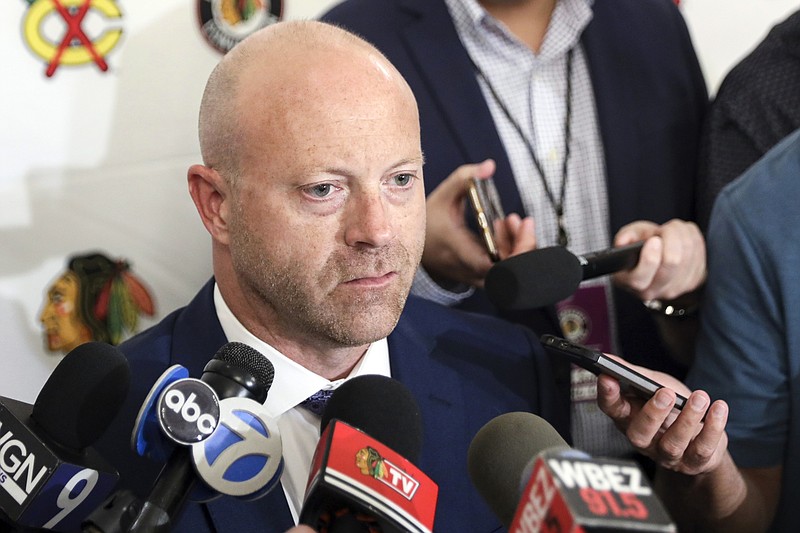 CHICAGO -- The Chicago Blackhawks mishandled allegations that an assistant coach sexually assaulted a player during the team's Stanley Cup run in 2010, according to an investigation commissioned by the franchise that cast a shadow over the NHL on Tuesday.

Stan Bowman, Chicago's general manager and president of hockey operations, resigned in the wake of the findings by an outside law firm, and the NHL fined the team $2 million for "the organization's inadequate internal procedures and insufficient and untimely response." Al MacIsaac, one of the team's top hockey executives, also is out.

Florida Panthers Coach Joel Quenneville and Winnipeg Jets General Manager Kevin Cheveldayoff, who were with the Blackhawks when the sexual assault allegations were first reported, were named in the damning report as well.

The Panthers declined to comment, citing NHL Commissioner Gary Bettman's plans to meet with Quenneville. There was no immediate word from the Jets on Cheveldayoff's status.

The Blackhawks hired Jenner & Block to conduct what they called an independent review in response to two lawsuits filed against the franchise: one by a player identified as John Doe alleging sexual assault by then-assistant coach Brad Aldrich in 2010 and another filed by a former student whom Aldrich was convicted of assaulting in Michigan.

The report, which team CEO Danny Wirtz called "both disturbing and difficult to read," was released by the franchise. Former federal prosecutor Reid Schar, who led the investigation, said the firm found no evidence that Wirtz or his father, Rocky, who owns the team, were aware of the allegations before the former player's lawsuit was brought to their attention ahead of its filing.

"It is clear that in 2010 the executives of this organization put team performance above all else," Danny Wirtz said. "John Doe deserved better from the Blackhawks."

In a statement released through his attorney, Susan Loggans, John Doe said he was "grateful for the accountability" shown by the Blackhawks.

"Although nothing can truly change the detriment to my life over the past decade because of the actions of one man inside the Blackhawks organization, I am very grateful to have the truth be recognized, and I look forward to continuing the long journey to recovery," John Doe said in the statement.

Danny Wirtz said he has instructed the organization's lawyers to try to "reach a fair resolution consistent with the totality of the circumstances." But Loggans said there hadn't been any settlement talks.

"I'm waiting to see if there's any action behind their repentance that they expressed today," she told The Associated Press.

Bowman, the son of Hall of Fame coach Scotty Bowman, said he was stepping aside because he didn't want to be a distraction for the team. He also resigned his position as GM of the U.S men's hockey team at the 2022 Winter Olympics.

"Eleven years ago, while serving in my first year as general manager, I was made aware of potential inappropriate behavior by a then-video coach involving a player," he said in a statement released by the Blackhawks. "I promptly reported the matter to the then-president and CEO who committed to handling the matter.

"I learned this year that the inappropriate behavior involved a serious allegation of sexual assault. I relied on the direction of my superior that he would take appropriate action. Looking back, now knowing he did not handle the matter promptly, I regret assuming he would do so."

"What is clear is that after being informed of Aldrich's alleged sexual harassment and misconduct with a player, no action was taken for three weeks," Schar said.

According to the report, Bowman recalled that, after learning of the incident, Quenneville shook his head and said it was hard for the team to get to where it was, and they could not deal with this issue now.

The report found no evidence of any investigation or contact with human resources before McDonough informed the team's director of human resources about the allegations on June 14 -- a delay that violated the Blackhawks' sexual harassment policy and had "consequences," according to Schar.

"During that period, Aldrich continued to work with and travel with the team," Schar said. "On June 10th, during an evening of celebration after the Blackhawks' Stanley Cup win the previous day, Aldrich made an unwanted sexual advance towards a Blackhawks intern, who was 22 years old at the time.

"Also after the Stanley Cup win, Aldrich continued to participate in celebrations in the presence of John Doe, who had made the complaint."

While announcing in July that he was willing to participate in the team's probe, Quenneville said in a statement that he "first learned of these allegations through the media earlier this summer." Cheveldayoff said in a statement that he had no knowledge of the allegations until he was asked if he was aware of anything prior to the end of Aldrich's employment with the Blackhawks.

Bettman said he would "reserve judgment" on Quenneville and Cheveldayoff, and he plans to meet with them to discuss their roles in the situation.

The NHL said $1 million of the Blackhawks' fine will help fund organizations in the Chicago area "that provide counseling and training for, and support and assistance to, survivors of sexual and other forms of abuse." The $2 million fine is eight times what the New York Rangers were docked last season for criticizing the league's head of player safety.

On June 16, 2010, according to the report, Aldrich was given the option of resigning or being part of an investigation into what happened with John Doe. Aldrich signed a separation agreement and no investigation was conducted.

Aldrich received a severance and a playoff bonus, according to the report, and he was paid a salary "for several months." He hosted the Stanley Cup for a day in his hometown, and his name was engraved on the iconic trophy.

The former player's lawsuit, filed May 7 in Cook County Circuit Court, alleges Aldrich also assaulted another unidentified Blackhawks player. The former player who sued and is referred in the document as John Doe is seeking more than $150,000 in damages.

Aldrich was sentenced to nine months in prison for the Michigan assault.

Kyle Davidson was elevated to interim GM for the Blackhawks, and USA Hockey said it expects to announce a replacement for Bowman soon. 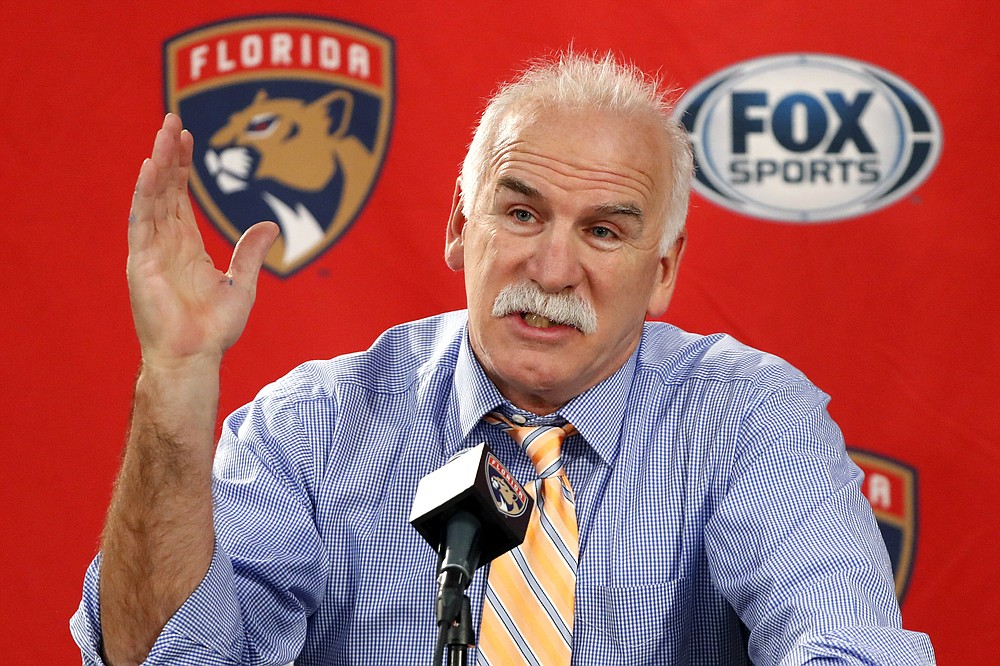 FILE - In this Jan. 21, 2020, file photo, Florida Panthers head coach and former Chicago Blackhawks coach, Joel Quenneville, responds to a question during his first visit back to Chicago as a head coach before an NHL hockey game between the Blackhawks and Panthers. The Blackhawks are holding a briefing Tuesday, Oct. 26, 2021, to discuss the findings of an investigation into allegations that an assistant coach sexually assaulted a player in 2010. The Blackhawks pledged to release the findings of the investigation, which general manager Stan Bowman, former coach Quenneville and others who were in the organization at the time agreed to cooperate with. (AP Photo/Charles Rex Arbogast, File) 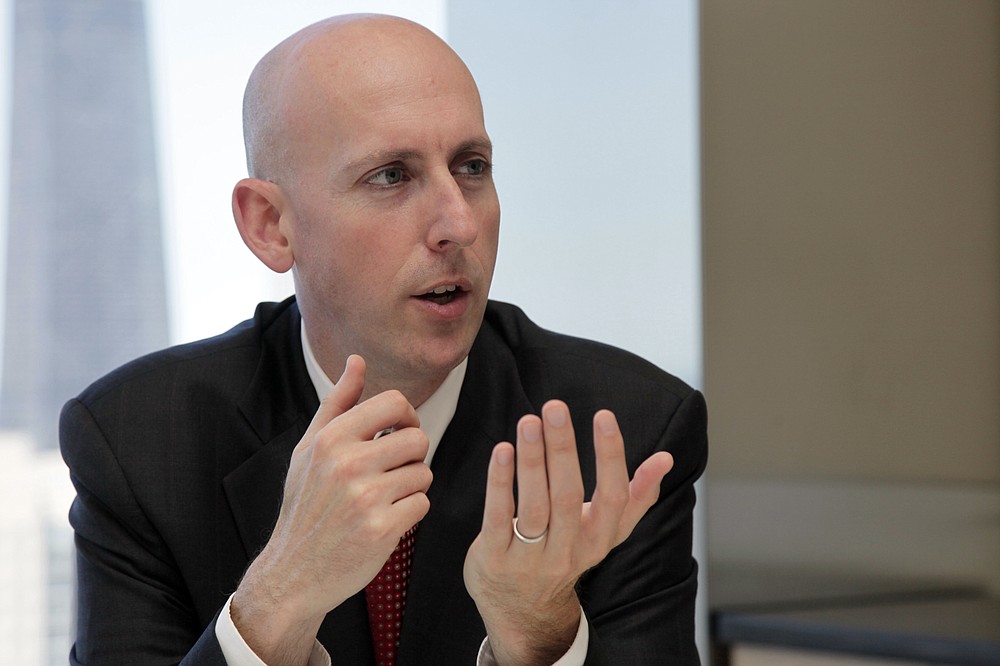 FILE - In this June 4, 2012, file photo, former assistant United States Attorney Reid Schar speaks during an interview in Chicago. The Chicago Blackhawks are holding a briefing Tuesday, Oct. 26, 2021, to discuss the findings of an investigation into allegations that an assistant coach sexually assaulted a player in 2010. Team owner Rocky Wirtz, CEO Danny Wirtz and former federal prosecutor Reid Schar, who ran the investigation, are scheduled to speak. (AP Photo/M. Spencer Green, File) 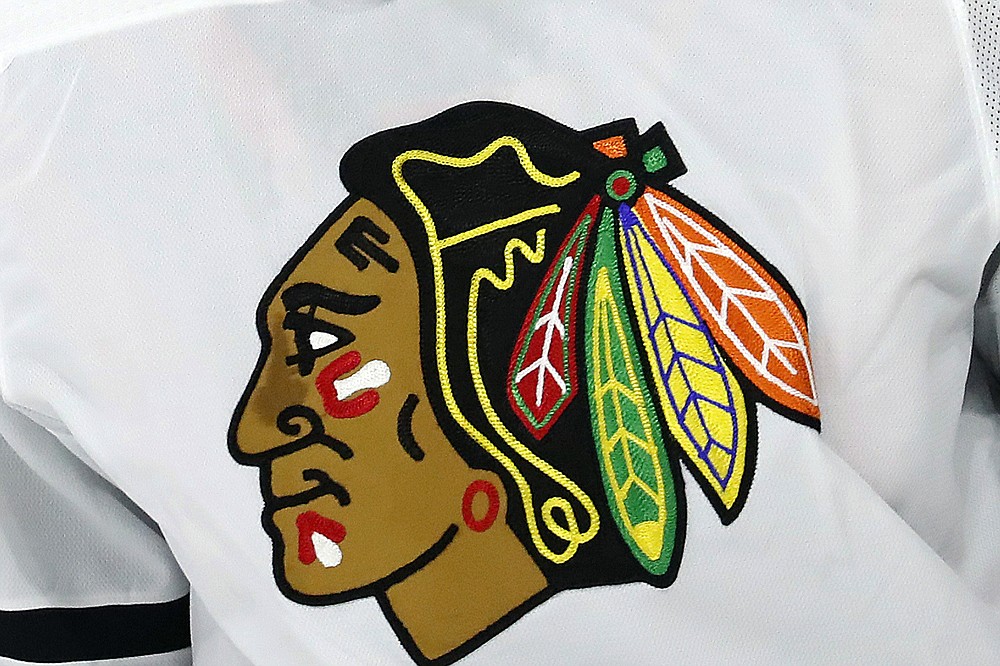 FILE - In this May 3, 2021, file photo, the Chicago Blackhawks logo is displayed on a jersey in Raleigh, N.C. The Blackhawks are holding a briefing Tuesday, Oct. 26, 2021, to discuss the findings of an investigation into allegations that an assistant coach sexually assaulted a player in 2010. (AP Photo/Karl B DeBlaker, File)