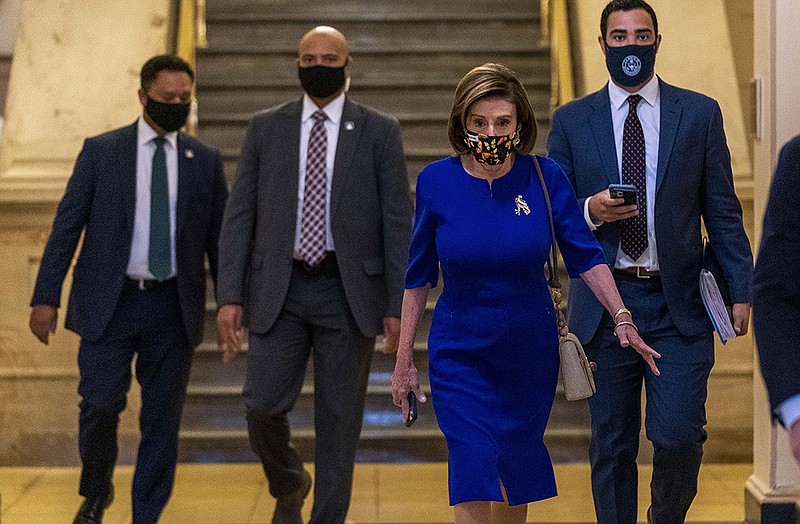 WASHINGTON -- Senate Democrats rushed Tuesday to nail down the details of a groundbreaking tax on billionaires' wealth, part of an elaborate menu of tax increases to finance a significantly scaled-back bill that would strengthen the social safety net and address climate change.

Democrats' plans to pay for the social policy and climate spending could prove to be the most innovative components of the party's top-priority domestic legislation, which was once envisioned as a transformative cradle-to-grave initiative to vault a stagnant working class into prosperity.

Now, even as President Joe Biden and his allies cut down the plan to ensure it can pass even with Democrats' razor-thin edge in Congress, they are toiling to agree on new tax policies that could have far-reaching consequences.

Among them is a measure Senate Democrats presented Tuesday that would impose a 15% minimum tax rate on corporations based on the profits they report to their shareholders, not what they show to the Internal Revenue Service.

With pressure mounting, Biden met Tuesday evening with two holdout Democrats -- Sens. Joe Manchin of West Virginia and Kyrsten Sinema of Arizona, according to a person who requested anonymity to discuss the private meeting. The president is pushing for an agreement before he leaves for global summits later this week.

[Video not showing up above? Click here to watch » https://www.youtube.com/watch?v=9m2Oc22G3_A]

All told, Biden's package remains a substantial undertaking -- and could still approach $2 trillion in perhaps the largest congressional effort of its kind in decades, though it's far slimmer than the president and his party first envisioned.

The billionaires' tax and the corporate minimum tax faced skepticism among House Democrats, who questioned their feasibility, and both were likely to face legal and constitutional challenges. For the first time, billionaires would face a tax on the unrealized gains in the value of their liquid assets, such as stocks, bonds and cash, which can grow for years as vast capital stores that can be borrowed off to live virtually income-tax-free.

The courts would have to determine whether unrealized gains in wealth can be considered income under the 16th Amendment, which allows the federal government to tax income. And even if they passed legal muster, the measures were all but certain to spawn fresh tax-avoidance efforts.

But with Sinema serving as a one-woman blockade against more conventional tax-rate increases, Democrats appeared to have no choice but to turn to creative revenue measures.

"I've always felt that success was giving everybody in America the chance to get ahead, and what we're dealing with here are flagrant loopholes in the tax code," said Sen. Ron Wyden, D-Ore. and chairman of the Senate Finance Committee. "They're legal, but I'm going to close them."

Democratic leaders hoped to unveil a final bill today that could pass in the House and Senate, but several sticking points remained.

House Speaker Nancy Pelosi told lawmakers that they were on the verge of "something major, transformative, historic and bigger than anything else" ever attempted in Congress, according to a person who requested anonymity to share her private remarks to the caucus.

Manchin seemed to torpedo a plan that would require banks to provide the IRS with more customer account information to help catch tax cheats, calling the idea "screwed up" and declaring it "cannot happen." Dropping it would mean that Democrats would have to find another way to raise the hundreds of billions of dollars the provision was estimated to generate.

Sen. Bernie Sanders, I-Vt., was still furious over the refusal of a handful of Democrats to give Medicare broad powers to negotiate prescription drug prices.

But overall, liberal Democrats were trying to make their peace with a stripped-down bill that would turn a once-expansive vision for social transformation into a series of short-term measures -- many of which would expire under a Republican Congress if history holds and the president's party loses seats in next year's midterms.

"I'd rather we put programs out there, and if people like them, then we should continue them as a government, and if for some reason they're not popular, well, then that also helps make some determinations," said Rep. Mark Pocan, D-Wis. and a leader of the progressive House Democrats.

Rep. Pramila Jayapal, D-Wash. and head of the Progressive Caucus, struck a pragmatic note: "Look, the thing is, we would have been done with a very different bill a month ago if we only needed 90% of us, but that's not the case. We need 100% of us."

Jen Psaki, the White House press secretary, acknowledged that the package would not contain everything that Biden wanted, but, she said, "The alternative to what is being negotiated is not the original package; it is nothing."

Jayapal said not all of the provisions have been truncated. Child care subsidies should last six years, and home and community-based health care assistance could stretch even longer.

But other measures have been cut. Two years of guaranteed community college were jettisoned. A broad path to citizenship for unauthorized immigrants was knocked out by the Senate parliamentarian, so Democratic leaders were trying to win approval to grant temporary legal status to some immigrants.

An expansion of Medicare coverage to include dental, vision and hearing care appeared likely to be cut back, if not eliminated, so Sanders was pushing for a $1,000 debit card as a "bridge to a permanent program," particularly for dental benefits. A permanent extension of the child tax credit created for a year in March's pandemic relief bill was to be extended only another year.

That left the tax increases that Democrats were cobbling together on the fly as potentially the most far-reaching aspect of the plan. Sinema's refusal to accept conventional tax-rate increases has played into the hands of Sen. Elizabeth Warren, D-Mass. and a longtime proponent of creative measures to break through the tax-avoidance strategies of the rich.

"These problems cannot be fixed by raising rates," she said.

The corporate minimum tax, for instance, plays off Warren's longstanding efforts to force companies to pay taxes on the profits they boast about to shareholders, rather than those they minimize for taxpaying purposes. The minimum tax unveiled Tuesday was something of a substitute for initial efforts -- blocked by Sinema -- to raise the corporate income tax rate to at least 25% from 21%, still far lower than the 35% rate before President Donald Trump's 2017 tax cut.

Under the plan, companies with at least $1 billion in profits -- about 200 publicly traded corporations -- would no longer be able to escape income taxation altogether. The 15% minimum tax would also bring the United States into compliance with the standard recently set by the Organization for Economic Cooperation and Development to try to root out tax havens.

Senate Finance Committee aides singled out Amazon, which over the past three years reported $45 billion in profits, including a record $20 billion last year, but paid an effective tax rate of 4.3%. In 2018, they said, Amazon did not pay any federal income tax. Sen. Angus King, I-Maine, estimated the minimum tax would raise $300 billion to $400 billion over 10 years.

Importantly, Sinema blessed it as "a common-sense step toward ensuring that highly profitable corporations -- which sometimes can avoid the current corporate tax rate -- pay a reasonable minimum corporate tax on their profits."

The details of the billionaires' tax were being hammered out Tuesday night. Under the plan, Congress would impose a one-time tax on all the gains in value of tradable assets held by billionaires from the time they were initially purchased. That first hit would be huge, since people such as Mark Zuckerberg of Facebook, Elon Musk of Tesla and Jeff Bezos of Amazon sit on vast shares of the companies they created, which initially had a value of zero.

After that, anyone with $1 billion in assets or who received $100 million in earnings for three consecutive years would face an annual tax on the gains in value of their publicly traded assets, whether or not they were sold.

House members continued to be leery.

"Do I like the politics of it? Yeah, I think it's sensible," said Rep. Richard Neal of Massachusetts, chairman of the House Ways and Means Committee. "I think the implementation for the plan could be a bit more challenging."

However, "Here's the heart of it," Wyden said. "Americans read over the last few months that billionaires were paying little or no taxes for years on end."

Republicans deride the billionaires' tax, and some have suggested that it would face a legal challenge.

And key Democrats were also raising concerns about the tax, saying the idea of simply undoing the 2017 tax cuts by raising the top rates was more straightforward and transparent.

Under the bill approved by Neal's panel, the top individual income tax rate would rise from 37% to 39.6% on those earning more than $400,000, or $450,000 for couples. The corporate rate would increase from 21% to 26.5%. The bill also proposes a 3% surtax on the wealthiest Americans with adjusted income above $5 million a year.

Less concerned about the new taxes, Manchin is forcing his party to reconsider the expansion of health, child care and climate-change programs that he views as too-costly or unnecessary government entitlements.

On climate change, coal-state Manchin rejected Biden's clean-energy strategy as too punitive on providers that rely on fossil fuels. Instead, the White House floated an idea to beef up grants and loans to incentivize clean-energy sources.

Information for this article was contributed by Jonathan Weisman of The New York Times; and by Lisa Mascaro, Aamer Madhani, Alan Fram, Farnoush Amiri, Darlene Superville and Colleen Long of The Associated Press.