Governor says he expects ‘some hesitancy’ on kids covid shots 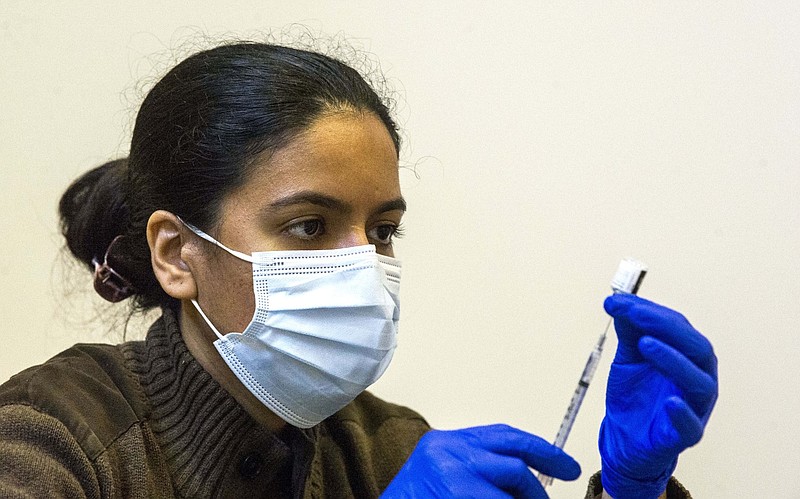 Neha Sharma, a pharmacist, draws a dose of the Moderna covid-19 vaccine at a UAMS vaccine clinic at University Park in Little Rock in this March 8, 2021, file photo. (Arkansas Democrat-Gazette/Stephen Swofford)

Gov. Asa Hutchinson on Tuesday said he expects "some hesitancy among parents" to get their children vaccinated against covid-19 once a vaccine is approved for youths younger than 12, but added that some parents appear to be eager for their kids to get the shots.

"I think that whenever you see it approved for [ages] 5 to 11 that you'll see an immediate increase in vaccines given out for that age group because many parents have already made the decision, whenever that's ready and available, I want my child to have that protection," Hutchinson said.

"I think you'll see others that will say, we'll wait on that.

"I think there will naturally be at that age group probably some reluctance in it, but I expect an immediate increase in the numbers whenever that [authorization] happens."

Hutchinson made the comments as the number of people hospitalized with covid-19 in Arkansas fell to its lowest level in almost four months after rising the previous two days.

The state's count of cases rose by 502, Tuesday, an increase that was smaller by 159 than the one a week earlier.

Arkansas' death toll from the virus, as tracked by the Department of Health, rose by 14, to 8,306.

At his weekly news conference at the state Capitol, Hutchinson said the state will be tracking vaccinations of children ages 5-11 to see how the uptake compares with that among children ages 12-15, who became eligible to receive the Pfizer vaccine in May.

An advisory committee to the U.S. Food and Drug Administration on Tuesday recommended authorizing a low-dose version of the Pfizer vaccine for the younger age group.

If authorized by the FDA, shots for the new age group could start in Arkansas after the U.S. Centers for Disease Control and Prevention issues recommendations, which is expected to happen next week.

Information on how many Arkansans ages 12-15 have been vaccinated wasn't available Tuesday.

By comparison, for Arkansas adults, the percentages were 69.8% for those who had received at least one dose and 57.9% for those who are fully vaccinated.

At the news conference, Hutchinson and state Health Secretary Jose Romero were given flu shots and urged other Arkansans to get theirs.

Hutchinson displayed a chart showing that, after an unusually mild 2020-21 flu season, the number of visits to doctors' offices by people with flu-like symptoms was higher than usual over the summer and has been up so far this fall compared with other recent years.

"We don't want to have 'twindemics' – spikes with both covid and with the flu," Romero said.

"We have that potential to happen this year as we've done away with social distancing and masking, and so it's really important that you get the [flu] vaccine, not just for adults but also for children."

Hutchinson said he'd also like to see the pace of the state's covid-19 vaccinations increase.

The Health Department's tally of doses that had been administered grew Tuesday by 11,527, which was larger by more than 4,200 than the increase a week earlier.

Booster shots of the Pfizer and Moderna vaccines accounted for almost 66% of the most recent increase.

Still, first doses rose by 2,274, which was larger by 654 than the increase in first doses the previous Tuesday.

"We really need to accelerate that as we look toward the winter months coming and a little bit of the unknown," Hutchinson said.

"We certainly want to increase those vaccination rates."

Also Tuesday, state officials said the number of public school districts and charter school systems using regular coronavirus testing under a modified quarantine protocol grew to 53 this week after a two-week pilot in the Springdale and Russellville school districts.

"I think they recognize the potential to keep kids in school, and of course that's a goal."

The "test-to-stay" protocol allows students and employees who are identified as a "close contact" of a person infected with covid-19 in a school setting to continue going to school as long as they don't have symptoms, agree to regular tests that come back negative, and wear masks while indoors.

In a school setting, a close contact is defined as someone who was within 3 feet of an infectious person for 15 minutes or more during a 24-hour period.

Normally, people identified as close contacts are required to quarantine at home for up to 14 days unless they are fully vaccinated, they recovered from a previous covid-19 infection within the past 90 days or they and the infected person were both wearing masks.

Under the test-to-stay option, the close contact must submit to testing for seven days after the exposure.

The close contacts should still stay home during the quarantine period when they're not at school, according to state guidelines.

The Health Department is providing the school districts with the testing supplies.

Department spokeswoman Danyelle McNeill said the department has about 300,000 rapid antigen tests, including 15,280 that were sent last week to the school districts.

"We're going to watch to make sure there isn't an increased number of cases in the school-aged kids," Romero said.

In the Rogers School District, which was listed as being among those using the new protocol, virus concerns prompted a shift to virtual instruction this week for 29 second-grade students at Eastside Elementary School.

Charles Lee, the district's assistant superintendent for general administration, said the hope is for a return to face-to-face instruction Monday, but some students may continue in quarantine until Tuesday.

The number of people hospitalized with covid-19 in the state fell Tuesday by 15, to 380, its lowest level since July 5.

After falling the previous three days, the number who were on ventilators remained at 113.

The number who were in intensive care, however, rose for the second-straight day, going from 178 as of Monday to 182.

After rising a day earlier, the average daily increase in the state's case count over a rolling seven-day period fell to 450, its lowest level since the week ending July 1.

Already at its lowest level since July 6, the number of cases that were considered active fell by 86, to 4,826, as recoveries and deaths outpaced new cases.

McNeill said all of the deaths reported Tuesday happened within the past month.

She said 6.3% of the state's coronavirus tests were positive in the seven-day span ending Monday, the same percentage that was initially reported for the week ending Sunday and down from a high during the summer of 16.3% the week ending Aug. 4.

The number of the state's virus patients who have ever been on ventilators with covid-19 rose by nine, to 2,893.

The number of Arkansans who had received booster shots rose by 1,377, to 112,508, representing 7.8% of the fully vaccinated population.

Among the states and District of Columbia, Arkansas continued to rank 37th in the percentage of its total population that had received at least one dose.

In the percentage of who were fully vaccinated, it fell from 42nd to 43rd, ahead of Tennessee, Louisiana, North Dakota, Mississippi, Alabama, Wyoming, Idaho and West Virginia.

Nationally, 66.4% of people had received at least one dose, and 57.4% were fully vaccinated.

Of the fully vaccinated population nationally, 7% had received booster doses.