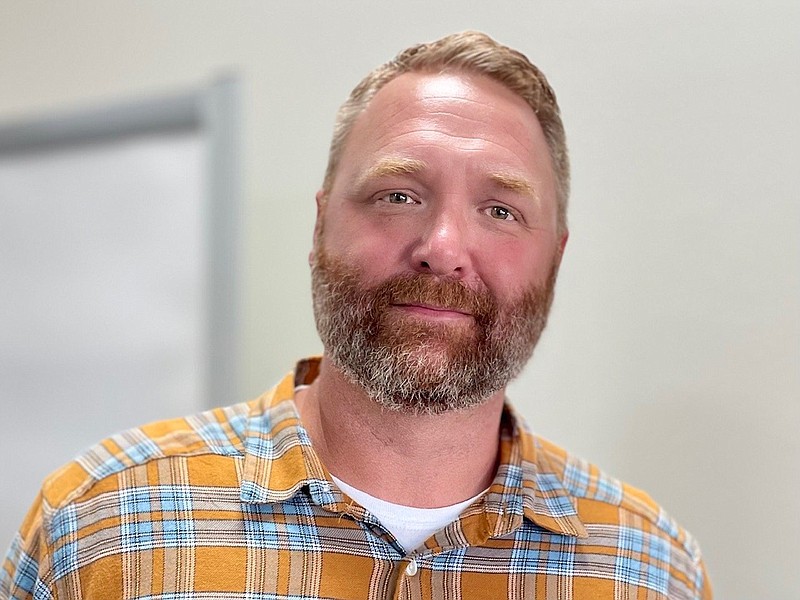 Brad Lewter, senior pastor of Grand Avenue Baptist Church in Fort Smith, introduced a resolution Tuesday at the annual meeting of the Arkansas Baptist State Convention calling for creation of a sexual abuse task force which will report back on best practices and steps taken by the convention in a year. The resolution passed unanimously. (Arkansas Democrat-Gazette/Frank Lockwood)

Messengers to the annual meeting of the Arkansas Baptist State Convention unanimously supported the resolution, which instructs the next convention president to create the task force "to ensure the policies and procedures" of the convention "are above reproach in handling sexual abuse allegations."

The task force would report back on "best practices and steps taking within the convention" before the 2022 annual meeting.

Brad Lewter, senior pastor at Grand Avenue Baptist Church in Fort Smith, was greeted with amens and applause after introducing the resolution and explaining why he believes it is necessary.

"I recognize that the Southern Baptist Convention climate right now is one of division and that much of what we hear is filtered through whatever tribe we belong to. But this is one of those issues that all Christians should agree on," he said.

"This is not one of those motions that's driven by politics or grandstanding, but this is really important for Arkansas Baptists during this time," he said.

When sexual abuse victims step forward, Baptists must be "prepared to do what's best for them, not only in the eyes of the law but, most importantly, in the eyes of our Lord," he said.

Concerns about the handling of sex abuse allegations has divided the Southern Baptist Convention, the nation's largest Protestant denomination with 14.1 million members.

Earlier this month, the convention's executive committee agreed to provide independent investigators with material that would normally be shielded by attorney-client privilege.

The move prompted the convention's general counsel to withdraw. Ronnie Floyd, the executive committee's president and chief executive officer, subsequently resigned, after expressing his own concerns.

Archie Mason, pastor of Central Baptist Church in Jonesboro and a member of the national executive committee, was among those agreeing to provide investigators with the material they had requested.

He also supported Lewter's resolution, seconding his motion and asking that Lewter be given the opportunity to address the need for the task force.

In an interview, Mason said there are many victims stepping forward; some were abused in church, most were not, he said.

Men as well as women are dealing with the pain, he added.

In recent months, "I've just been introduced to so many abuse survivors," he said.

"One thing I've realized is that abuse survivors suffer from great guilt. Even though they were younger and they could not control the circumstances, they suffer great guilt that has stayed with them. [It's important to] help them understand you are a victim, and it is not your fault what happened in your life,' he said.

"In Arkansas, we just want to get this right," he said.

In 2019, an Arkansas teenager sued the convention, its executive director, J.D. "Sonny" Tucker, Millcreek Baptist Church, and its former pastor, Teddy Leon Hill Jr., as well as the Diamond Lakes Baptist Association, alleging that the pastor had sexually abused him when he was a minor.

On Tuesday, Tucker declined to discuss the lawsuit, but issued a written statement addressing the decision to create the task force.

"As the Executive Director of the Executive Board of the ABSC, I stand against sexual abuse to the highest degree. My heart breaks for those who have faced this tragedy. I fully affirm and welcome the establishment of a task force with the intention to ensure the ABSC operates by the highest standards possible in regards to sexual abuse and allegations related to this matter. We will continue to utilize resources to serve churches in order to prevent sexual abuse from ever occurring. Also, we will continue to seek ways to bring help, comfort and healing for those who have suffered sexual abuse," he said.

Attorney Josh Gillispie, who represents the plaintiff in the lawsuit against Hill and the others, says sex abuse permanently alters how the victims view religion.

"One of the first things that they'll tell you is that the spiritual part of their lives is kind of permanently dead. Dead forever," he said.

It's important for Southern Baptists to take responsibility for the damage that's occurring, Gillispie said.

"When the buck stops nowhere, there's no accountability and no one's held accountable, nothing changes, he said.