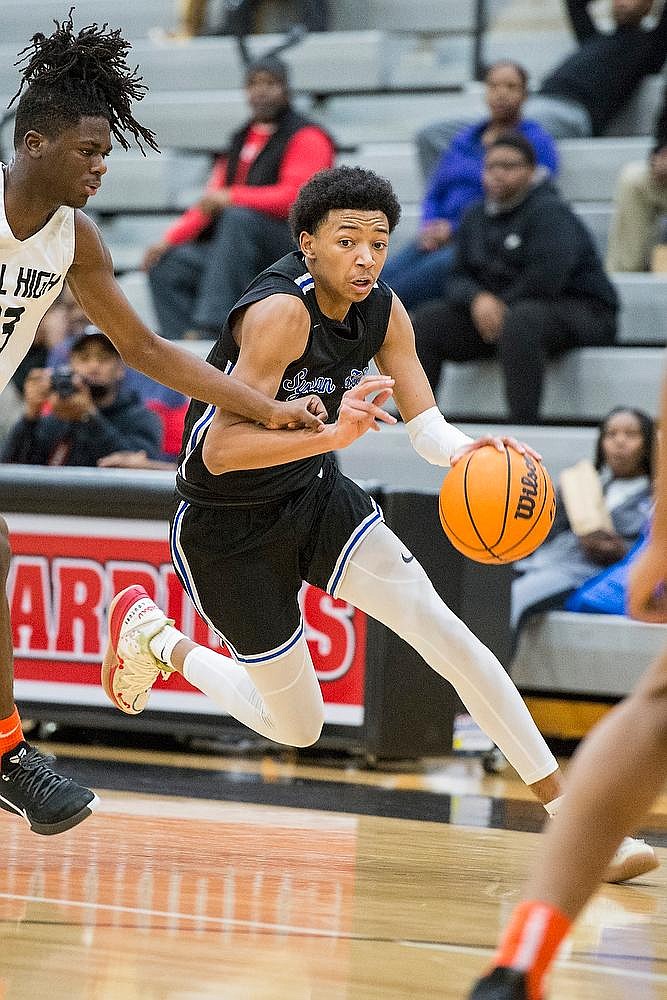 Smith, a 6-5, 185-pound senior who's rated as a five-star guard by ESPN, transferred to North Little Rock after playing the previous three seasons at Sylvan Hills. He was the Arkansas Democrat-Gazette All-Arkansas Preps Boys Underclassman of the Year as a sophomore and the Player of the Year as a junior.

On July 23, Smith became a registered student at North Little Rock and started working out with the team in early August. But according to Arkansas Activities Association Executive Director Lance Taylor, another program's report opened the door to an inquiry that led Smith being deemed ineligible.

"We had another school, a member school, report a violation to us, so we handed that off to North Little Rock and let them do their own investigation," Taylor said. "Of course, what they did to us, they self-reported that they had violated our rules. I know there's a lot of stuff out there, but this office has never made a decision because this office didn't have to make a decision. ... The school handled the situation from their internal investigation."

The rule in question stems from Page 35 and section E of the AAA handbook, which reads, "A student transferring, moving, or for any reason attending a new school where the student's non-school coach is a school coach, or is anyone assisting in any capacity with the coaching or training of the school team, is presumed to be attending for athletic purposes if the student participated in athletics the previous year."

Two trainers who have worked with Smith since the sixth and the seventh grades, volunteered with the Charging Wildcats basketball program in the past but ended their affiliation with the school in March after North Little Rock won the Class 6A state championship, months before Smith became a student at the school.

The school, according to AAA rules, was supposed to have the trainers sign an Athletic Release Form stating who they had trained when they started their affiliation with the school. The forms were never signed.

But Nick Smith Sr. said his son's eligibility issue could be resolved with the signatures from the superintendents of the two districts involved -- the North Little Rock School District and the Pulaski County Special School District, which includes Sylvan Hills High School.

On Page 35, section G, of the AAA handbook, the rule notes that, "a Changing Schools/Athletic Participation [CSAP] document, stating that the student was not recruited and did not change schools for athletic purposes, must be signed prior to participation by the superintendent or designated administrator of the previous school, the superintendent or designated administrator of the new school, and the parent[s] or legal guardian[s], witnessed by the new [receiving] school's administrator or a notary public."

"Nick did not break any rules," Smith Sr. said. "We were not recruited to go to North Little Rock in any way, shape or form by anybody. He had many options to go to other places and he chose to stay home and play in front of his family and friends his last year. He moved for reasons that were beyond basketball.

However, North Little Rock released a "media response to the AAA investigation" on the district's Facebook page Tuesday in what the district noted "is an attempt to clarify facts and ensure the public is aware that the ultimate decision maker is the AAA.

"The matter is in the hands of the AAA, and that governing body has a process in place," the statement said. "NLRSD will continue to support its student-athletes and stakeholders and will continue to fully cooperate with the AAA in this matter."

The news release also included a timeline associated with the investigation as well as North Little Rock's involvement, beginning on Aug. 5, when the district was notified by the AAA that it received a notice of violations from a representative with the Pulaski County Special School District. According to the statement, North Little Rock was asked by the AAA to conduct its own internal investigation.

The outline also mentioned that on Sept. 14, the AAA confirmed to North Little Rock that it had violated two rules relative to a student-athlete. According to the release, the district requested an appeal to the AAA subcommittee on behalf of the student 10 days later, and on Oct. 14, that subcommittee voted 6-1 that North Little Rock had violated the two rules, making Smith ineligible to play.

In addition, North Little Rock also admitted that it is aware of the CSAP form but said the "form is not a part of the AAA appeals process, and in this instance, the form appears to contradict the ruling by the AAA that NLRSD violated Article III Section I Rule 5, G on Recruitment."

When reached by the Arkansas Democrat-Gazette on Tuesday, Taylor extensively explained and reviewed the proper channels that have to be met as it pertains to transfers. He went through a number of rules in the AAA's handbook, including Article III, Section 1, Rule 1, F3, which states "to gain eligibility through the legal attendance rule, the non-school coach rule, or the transfer rule, the following criteria must be met using the CSAP form."

"All these forms apply," Taylor explained.

Taylor mentioned that the Athletic Release Form -- one that was not signed -- would have put everyone on the same page.