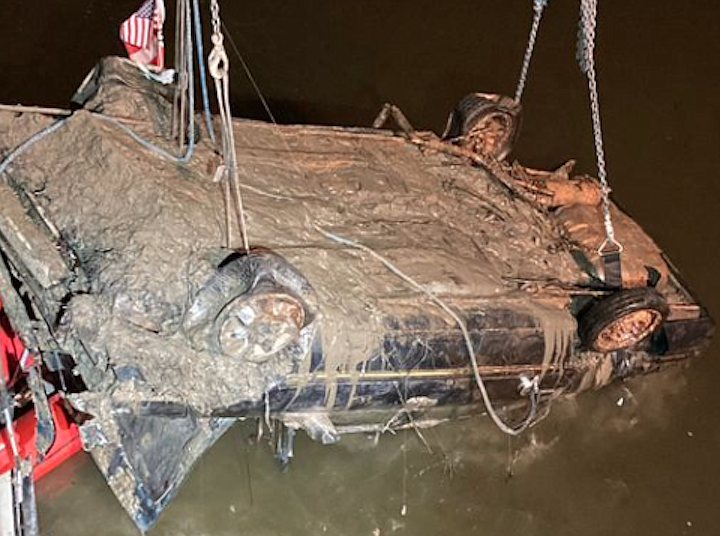 A vehicle believed to belonged to a woman who went missing on Sept. 11, 1998, is pulled from water in Pope County. (Courtesy of Pope County sheriff's office)

Authorities in Pope County have recovered a car matching the description of a vehicle that belonged to a woman who was reported missing 23 years ago, the sheriff’s office said Wednesday morning.

Human remains were found inside, according to a news release from the Pope County sheriff’s office.

Around 12:30 p.m., deputies received a 911 call advising that people had possibly located a vehicle matching the description of one belonging to Samantha Jean Hopper in the water near the 3700 block of Pleasant View Road, the release states.

Hopper had reportedly been traveling to drop off her daughter before continuing on to a concert in Little Rock. However, she, along with her daughter and her blue Ford Tempo, were never located, the release states.

Authorities said the vehicle was approximately 25 yards from the bank in about 8 feet of water.

Once recovered from the water, authorities found human remains that will be sent to the state Crime Laboratory for DNA testing, the release states.

The vehicle was found by the non-profit group Adventures with Purpose, which travels the country working on cold cases, according to the release. The search was part of the group’s 2021 Fall Road Trip, setting out to work 27 cold cases in search of 36 missing persons, according to its website.

An update to the organization’s Facebook page says a team of divers met with the group on Tuesday, along with Samantha’s mother and another daughter, who was 3 years old at the time of the woman’s disappearance.

Dive teams split up to span multiple locations in the area of Lake Dardanelle with the organization taking a route along Mill Creek, sending divers into the Illinois Bayou near Pleasant View Road, the post states.

A target on sonar was identified under the West Pleasant View Road Bridge, according to the post. The team found a blue Ford Tempo with a missing license plate.

Though a car seat was in the back of the vehicle, the organization said on Tuesday it had not gotten confirmation whether her daughter was inside the car.

This story has been updated. It was originally published at 10:38 a.m.