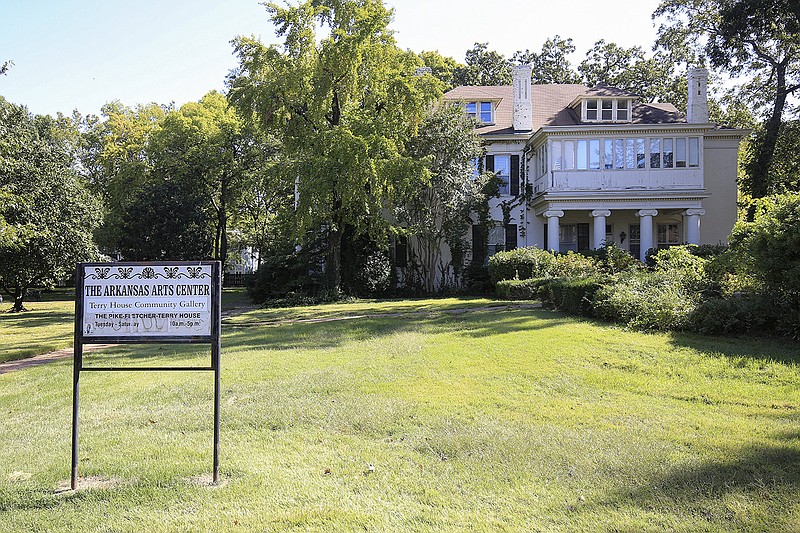 The Terry House on East Seventh Street in Little Rock is an antebellum mansion widely known for the notoriety of its earlier occupants. (Arkansas Democrat-Gazette/Staton Breidenthal)

The Arkansas Museum of Fine Arts rejected blame for the deteriorating Pike-Fletcher-Terry mansion gifted to Little Rock 57 years ago for the museum's use, saying Wednesday that it "does not own the building and has no contractual responsibility to operate or maintain it."

The museum's unsigned statement marked its first public comment since the historic home's original heirs filed a lawsuit last week asking for it to be returned to their family amid signs it has been abandoned.

The heirs who filed suit are grandchildren of the sisters Aldophine Fletcher Terry and Mary Fletcher Drennan, who donated the property to the city in 1964. According to a copy of the deed filed in court, the purpose was "for the use and benefit of The Arkansas Arts Center," which was the museum's name at the time.

Terry and Drennan's heirs also seek any money or property donated to what their lawsuit describes as a $1.5 million endowment held by the museum's foundation to maintain the two-story Greek Revival mansion, which along with a well-shaded lawn covers a city block spanning from Seventh to Eighth streets along Rock Street.

The lawsuit alleges a breach of contract because the Museum of Fine Arts is no longer using the home to advance cultural, artistic or educational interests, as set out as a condition of the deed. Listed as defendants are the museum, the museum's nonprofit foundation and the city of Little Rock.

Estimates attached to the original heirs' lawsuit show that it would cost more than $1.1 million to restore the property.

The museum's statement, which says criticism that it "neglected" the property is untrue, puts focus on the city.

"As an organization, the [museum] remains committed to working with the City to seek a positive outcome for the preservation of the Terry House," the statement says.

Stephanie Jackson, communications director for Little Rock Mayor Frank Scott Jr., said in an emailed statement that the city "provides regular upkeep and maintenance to the grounds of The Terry House.

"When the House was deeded to the City, it was on the condition that the House would solely be used for arts center purposes," Jackson said. "The City has always operated within this arrangement."

Like at the Terry House, the Fine Arts Museum's main building is owned by Little Rock. The city pays the museum an annual allotment for maintenance of the Ninth Street facility -- which is undergoing a $142 million expansion and renovation.

Capi Peck, a Little Rock city director, said city officials have had discussions about operating the mansion but can't afford to do so unless the city receives money to pay for the repairs. Peck said the heirs want an "affordable" and "very inclusive" public use to return to the storied home.

"It tells such a rich story of our city, of our state," Peck said.

A key issue emerging from the lawsuit is the whereabouts of any agreements outlining how the mansion would be maintained over the decades -- and any intent and spending restrictions placed on some $1.5 million raised in the 1980s to support a "Decorative Arts Museum" at the mansion.

No such agreement has been filed as part of the lawsuit.

The Arkansas Democrat-Gazette filed Freedom of Information Act requests Wednesday with the city, the museum and the museum's foundation for any such agreements. No documents were provided as of Wednesday evening.

Richard Mays, the attorney representing the heirs, said he had no comment when asked if he had a copy of such an agreement that he could share.

In October 1984, the museum's foundation launched a public fundraising campaign in coordination with the Winthrop Rockefeller estate, according to the Arkansas Democrat-Gazette's archives. Their goal was to raise at least $1.5 million to fund a decorative arts museum in the house, according to an Arkansas Democrat article published Oct. 14, 1984.

The Rockefeller estate pledged up to $1 million through a program in which it would match every $1 raised with $2 of its own, according to that article and others. But the newspaper reporting, which characterized the estate's gift as "an endowment," did not report on any spending restrictions or down-the-line maintenance obligations.

The Fine Arts Museum's statement Wednesday said its foundation raised nearly $2 million in the 1980s "to establish" the decorative arts museum, with most of that money raised from the Rockefeller estate.

"All monies were spent in accordance with the original intention of the donors," the release says.

Mays, the heirs' attorney, said after reading the statement that "the manner in which [the nearly $2 million] was spent will be resolved through a forensic accounting of" the museum's records.

The Fine Arts Museum has "spent millions" on the property, its release says, specifically noting $675,000 on capital improvements as well as additional money for a curator, exhibitions and other staff. The museum's budget also includes more than $30,000 a year for basic maintenance at the property, the statement said.

"This investment is made in good faith because of our long-standing relationship with the City and our history with and concern for the Terry House, but it is not enough to properly preserve this historic property," it reads.

Aside from its architectural significance, the antebellum mansion is widely known for the notoriety of its earlier occupants.

Albert Pike, a Confederate general, nationally known lawyer and co-founder of the national Masonic fraternal organization, had the house built, according to the lawsuit.

The family of Capt. John Gould Fletcher later occupied the house. Fletcher was a member of the Capitol Guards during the Civil War and later served as Little Rock's mayor and Pulaski County's sheriff, according to the filing.

Later, the elder Gould's daughter, Aldophine Fletcher Terry, lived in the home with her husband, Congressman John Terry, according to an entry in the Encyclopedia of Arkansas at the Central Arkansas Library System.

Fletcher Terry was key to forming the Women's Emergency Committee to Open Our Schools, which opposed then-Gov. Orval Faubus' resistance to the desegregation of Little Rock Central High School, Mays wrote in a news release.

The work led to the recall of three segregationist school board members and the reopening of the Little Rock schools, according to the lawsuit.

Today, passersby often lie on the lawn on sunny days, walk their dogs or sit on benches.

The building, pictures filed with the court show, is falling apart.