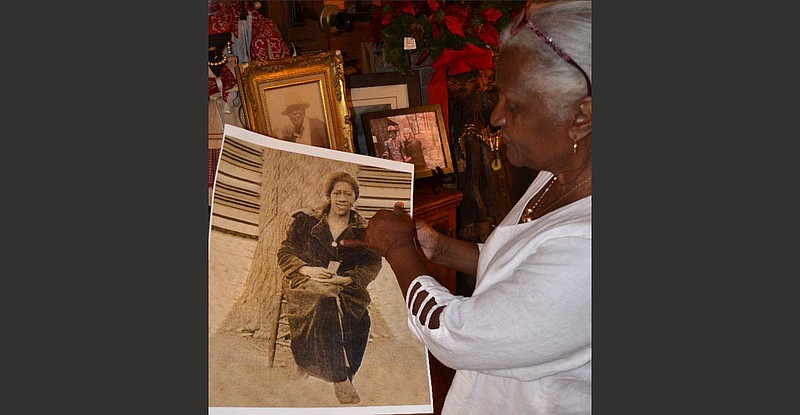 Caroline Williams holds up a large photo about which she says, "This is my dad's grandmother sitting barefoot on an auction block with a slave collar around her neck and a sale ticket in her hand." (Special to The Commercial/Richard Ledbetter)

"I wrote a book about both my great- and great-great-grandmothers titled 'The Quilted History,'" Williams said.

"I grew up in a dogtrot house in the Ebenezer community" just east of Crossett, she said. She still resides in the community.

The house, Williams added, "had two large rooms either side of the breezeway, a lean-to on back and a detached kitchen. Living in that house was my mother and father, two grandparents, an auntie and her three daughters, two uncles, and sometimes a third, along with my two brothers and myself. My great-maternal grandmother Rebecca Powell had seven children so she rotated around living with one or the other of them every seventh month. One month out of every seven, she joined us and became the matriarch of the family. She always had an old trunk she carried with her that contained a quilt she made. It has the initials and birthdays of all seven of her children sewn into it.

"Quilts were for everyday use, but back then, African-Americans only brought out their show-piece bed-covers on Sunday. We ate most all our meals around the table together but on Sunday she sat at head of table on one end while the preacher joined us for lunch and sat at the other. She brought out her show-piece quilt as a conversation piece and told us her stories. In addition to Sunday afternoon visits, she read us Bible stories at night and recounted her family's time during slavery.

"That quilt was passed down to the eldest daughter of each generation, which is me. I continue to teach it to my son and two surviving daughters, and when I'm gone it will go to my oldest girl."

Williams said, "Under that dogtrot house next to one of the foundation pillars was a slave ball and chain. We could play with it as kids, but we had to put it back under the house at the end of the day. I still have that slave ball."

Recounting official records and oral tradition passed down in her family, Williams said, "I have a document that shows where great-great-great paternal grandfather George Williams, whose wife was Sarah, were both sold along with three children in Lafayette County, Mississippi. They are listed as part of the property attached to the sale of a plantation outside Natchez.

"I have an old book that a teacher in Lawson, Arkansas, gave me with George Williams' name written in it. Someone else would have had to write it because he never learned how.

"I also have a picture of my dad's grandmother sitting on an auction block with a slave collar around her neck holding a sale ticket in her hand. She too was a seamstress."

She further shared, "There is a historical marker at Ebenezer with the names of Fikes, Gill and Williams" among others, "that were brought to Harrison Township from Alabama. Those same families still reside here today and are the descendants of slaves that arrived in 1839."

In an example how her family history has been kept vibrantly alive, Williams explained about great-grandmother Rebecca Powell.

"She named her children regarding what she had experienced in her life to help remind future generations about the things they went through," Williams said. "Her oldest child was named Alabama because that's where they were living when he was born. My father's mother was named Alpha Omega. Rebecca told us she gave her daughter that name because she was the first child born to freedom and the last child that would know slavery. She had a son she named Bill in honor of the Emancipation Proclamation Bill that freed the slaves."

She added, "great-great-Auntie Willie Etta was Rebecca's daughter born after the emancipation. She lived with us for two years. She died in 1989 at 105. Folks pronounce her name Willie Etta but her real name was 'Will I Ever.' She was called that because what they believed 'freedom' would be didn't turn out like they expected. They were still living on the same land, owning nothing, working for nothing for the same people who had held them in slavery. The name meant 'Will I ever be free?'

In a final note on Rebecca Powell, Williams said, "She could pray so powerful to make people's emotions break down when they heard her."

Referencing herself, Williams said, "Growing up I was called 'Methittee.' I had a white streak in my hair from birth. By the time I reached eleven, it had spread. I was always told Methittee meant 'blessed one,' because of my unusual hair color. There is only one person left in the community today who still calls me that.

"I used to wear my hair with a part down the middle with two braids hanging over my shoulders. My grandmother wore hers the same way until she died at 94 in 1960." With an appropriate chuckle, she said, "When I was a girl folks asked a boy I was dating about my hair and he told them, 'I found me a squaw.'

"I have the North Carolina census records for great-great-great maternal grandfather Tarlton Powell, who was a Union volunteer and a native-American prisoner of war in a Confederate prison camp. My DNA test shows I have Native American ancestry.

"I went in the military, and all my daughters followed that career. My husband and I both retired from the Navy."

Williams summed up, "When people say, 'That lady knows a lot of history' they're not mistaken. Our church at Ebenezer was founded in 1864 before the Civil War ended. I've done so much research I can show you where my great-great-great-grandparents were buried at that cemetery while they were still slaves."

Referencing her collection of historic artifacts, she concluded, "When I was growing up there were still a lot of old barns around here from slave times. I collected all kinds of reminders from those days including a slave collar, a set of shackles with chains and a hand-carved, wooden slave plate." 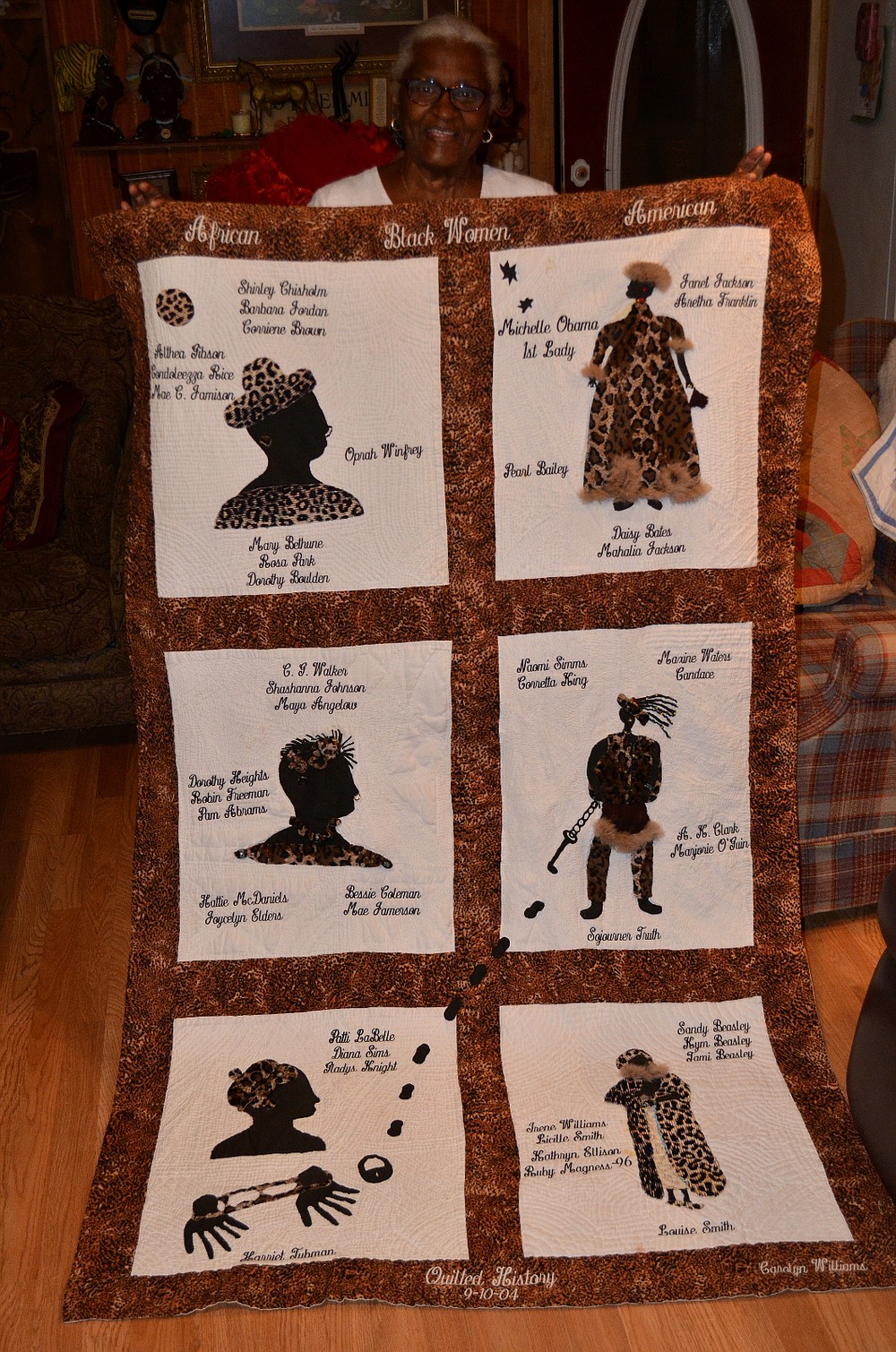 Caroline Williams displays one of her numerous handmade quilts that help tell the saga of her ancestors. (Special to The Commercial/Richard Ledbetter) 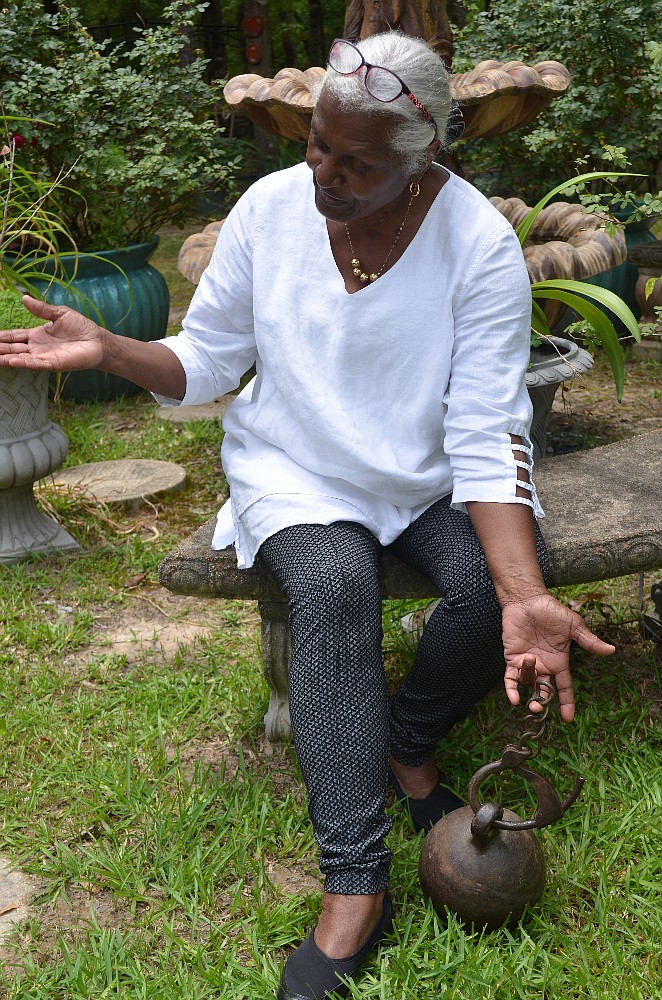 Caroline Williams examines the "slave ball" that resided beneath the porch of her childhood home. Family tradition holds how it was used to shackle one of her forefathers. (Special to The Commercial/Richard Ledbetter)