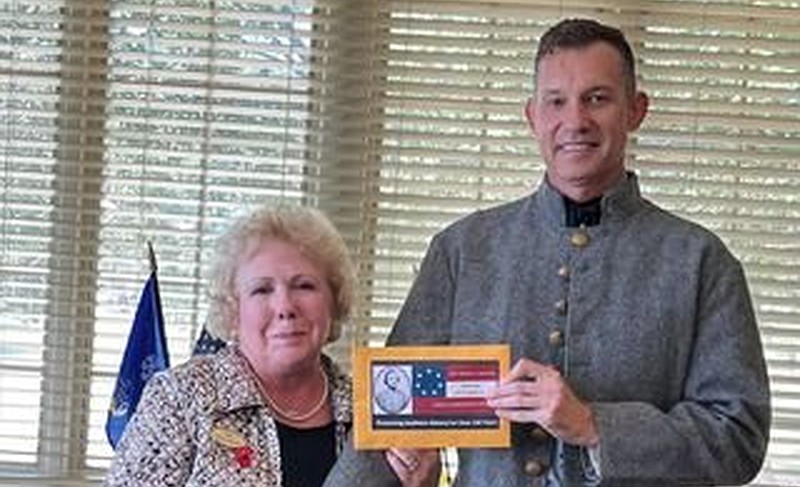 Randall Freeman, commander of the Sons of Confederate Veterans, General Robert C. Newton #197 Camp, presents a check to Pat McLemore, president of the Baseline-Meridian Chapter of the United States Daughters of 1812, at the Triad meeting at the Pine Bluff Country Club. (Special to The Commercial)

Pat McLemore, president of the Baseline-Meridian Chapter of the United States Daughters of 1812 (U.S.D. 1812), has worked most of 2021 attempting to secure grants and the necessary money to replace the bows on approximately 3,000 artificial wreaths.

During the Triad meeting of historical organizations at the Pine Bluff Country Club recently Randall J. Freeman, commander of the Sons of Confederate Veterans, General Robert C. Newton #197 Camp, made a presentation for the Christmas Wreaths for Heroes, according to a news release.

"It was my great pleasure to attend the United States Daughters of 1812 meeting at the Pine Bluff Country Club this morning, to present a nice financial donation to Patricia McLemore, president of the Baseline-Meridian Chapter, on behalf of the Little Rock Sons of Confederate Veterans Camp," Freeman said.

Members of the Newton Camp SCV annually assist in the placement of wreaths and the pick-up of the wreaths.

The wreaths were placed on the grave sites of unknown soldiers buried at the Little Rock National Cemetery. The Baseline-Meridian Chapter adopted the soldiers, buried with no name, several years ago and the red bows now need replacing, according to the release.

The "Unknowns" are from World War II, Spanish-American War and most from the war between the states, both soldiers of the Confederacy and the Union.

Before WWI, dog tags, the identifying tag each soldier wears so he can be identified, were not used.

The estimated cost of replacing all the bows is about $7,500. McLemore stated she could replace the bows in stages, about $750 each year.

For details on Christmas Wreaths for Heroes, contact Pat McLemore at pcmcmountain@yahoo.com.