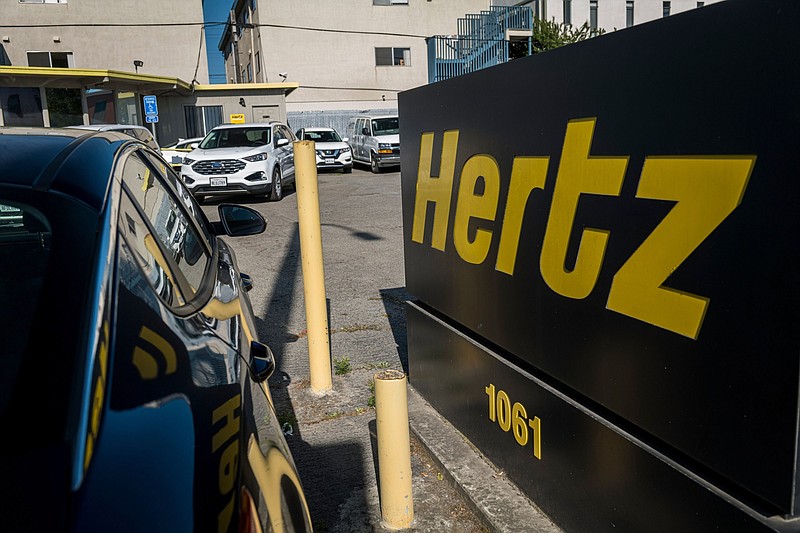 Signage for Hertz Global Holdings at a rental location in Berkeley, Calif., on May 5, 2020. MUST CREDIT: Bloomberg photo by David Paul Morris.

Hertz Global Holdings, fresh off a blockbuster order for 100,000 Teslas, reached an exclusive agreement to supply Uber drivers with electric vehicles and signed up Carvana Co. to dispose of rental cars it no longer wants.

Only 17 months ago, the Estero, Fla.-based Hertz was so troubled and its future so uncertain that it was forced to seek protection from creditors. Now, under the control of hedge fund and private-equity owners, Hertz is leaning on mobile technology and digitization in an effort to transform an industry known for uninspiring cars and poor customer experiences.

Under the agreement with Uber Technologies Inc., drivers for the ride-hailing giant who previously had to provide and maintain their own electric vehicles will instead be able to rent a Tesla from Hertz starting Friday. According to Hertz, it's an alternative to buying or leasing and will be cheaper than either.

Partnering with Uber and Phoenix-based Carvana addresses two key weaknesses in the rental business: asset-utilization -- how actively a car is rented out; and resale recovery -- how much of the purchase price is recouped when the car is sold.

Through the new deal with Carvana, Hertz hopes to eliminate the discounting necessary when selling vehicles from its fleet through dealers and wholesalers.

Consumers will be able to buy directly and pick up cars as soon as the following day. Carvana, home of the car vending machine, earns a commission.

Under the Uber agreement, drivers will pay a preferred weekly rate for unlimited miles in the Hertz electric vehicles, plus expenses for recharging and incidental damage.

Hertz, as with all rentals, covers or absorbs the cost of financing, basic maintenance, insurance and depreciation. Uber is offering drivers a zero-emissions incentive of $1 a ride for using electric vehicles and 50 cents for every rider who chooses to ride in an electric vehicle.

Hertz has been renting to Uber drivers since 2016. Its new agreement builds on that program, adding at least 50,000 Teslas to the pool of available vehicles by 2023.