FCC cites risk of ‘espionage and other harmful activities’ by Compiled Democrat-Gazette Staff From Wire Reports | October 28, 2021 at 2:00 a.m. 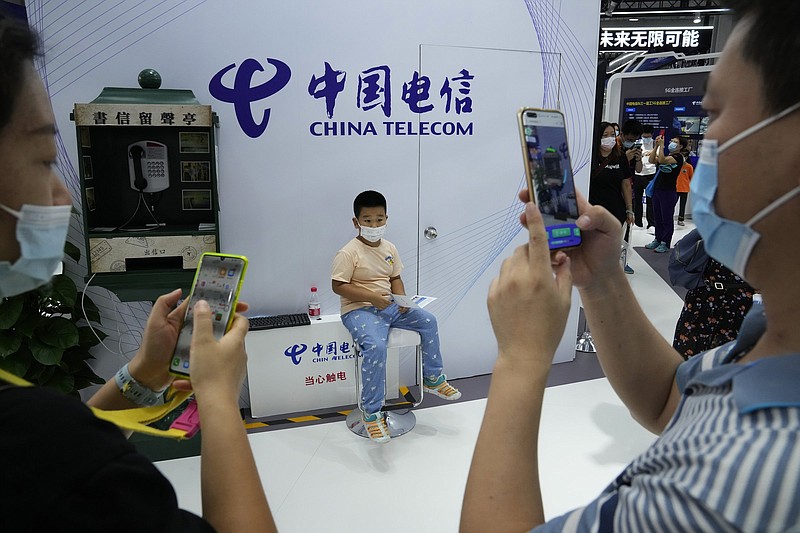 Visitors take photos near an old telephone booth at the China Telecom stand during the China International Fair for Trade in Services in Beijing last month. (AP/Ng Han Guan)

BEIJING -- U.S. regulators are expelling a unit of China Telecom Ltd., one of the country's three major state-owned carriers, from the American market as a national security threat amid rising tension with Beijing.

China Telecom (Americas) Corp. is required to stop providing domestic interstate and international service in the United States within 60 days under an order approved Tuesday by the Federal Communications Commission in a 4-0 vote. The FCC cited the danger that Beijing might use the company to eavesdrop or disrupt U.S. communications and "engage in espionage and other harmful activities against the United States.

The Biden administration has extended efforts begun under President Donald Trump to limit access to U.S. technology and markets for state-owned Chinese companies because of concern they were security risks or helping with military development. China Telecom is among companies that were expelled from U.S. stock exchanges under a Trump order barring Americans from investing in them.

The FCC said in 2019 that because of security concerns it planned to revoke licenses granted two decades earlier to China Telecom and another state-owned carrier, China Unicom Ltd. It rejected a license application by the third major carrier, China Mobile Ltd.

The company's conduct and communications to U.S. government agencies "demonstrate a lack of candor, trustworthiness and reliability," the FCC said, without giving details.

The Chinese government has said it would take steps to protect its companies but has yet to announce any retaliation.

Though China Telecom doesn't do a lot of business in the U.S., being barred from the market is significant coming on the heels of the moves against other strategic Chinese tech giants, including Huawei Technologies Co.

"It's an important action," said Martijn Rasser, director of the technology and national security program at the Center for a New American Security in Washington. "It also sends a broader message to Beijing, that regardless of who's president, the U.S. continues to be concerned about the risks posed by Chinese tech firms operating in the U.S."

Presidents Joe Biden and Xi Jinping are expected to meet virtually later this year, as overall relations show signs of warming following a Sept. 9 phone call between them. Shortly afterward, the U.S. reached a deal to release Huawei Chief Financial Officer Meng Wanzhou from extradition proceedings in Canada -- one of Beijing's top demands.

Since then, the U.S. and China have moved to rebuild communication lines cut off during years of clashes during the Trump administration over everything from trade and Taiwan to tech and the origins of the coronavirus. Vice Premier Liu He and U.S. Treasury Secretary Janet Yellen this week held their second call in about four months, which China described as "pragmatic, candid and constructive."

Still, areas of tension remain. In addition to U.S. sanctions and other punitive actions on Chinese officials and companies, the Biden administration's overtures to Taiwan have angered Beijing.

The telecom companies are on a U.S. government blacklist of entities deemed by the Pentagon to be involved in military development. Others include state-owned oil companies, suppliers of processor chips and video technology, and construction, aerospace, rocketry, shipbuilding and nuclear power equipment companies.

Beijing-based China Telecom is one of the largest phone companies in China and the second-largest wireless carrier in China with 370 million subscribers, according to a securities filing by the company Friday. Along with China Mobile and China Unicom, it dominates the Chinese telecommunications market, according to a U.S. Senate report last year.

"The FCC action is long overdue," said Derek Scissors, senior fellow at the American Enterprise Institute. "The Chinese telecom majors are arms of the government much more than they are commercial enterprises."

China Telecom earlier told the agency it's an independent business based in the U.S. and isn't subject to Chinese government control.

"The FCC's decision is disappointing," Ge Yu, a China Telecom spokesman, said in an email. "We plan to pursue all available options while continuing to serve our customers." There was no response to an email sent to the press contact at the Chinese embassy in Washington.

Information for this article was contributed by staff members of The Associated Press and by Todd Shields of Bloomberg News (WPNS).