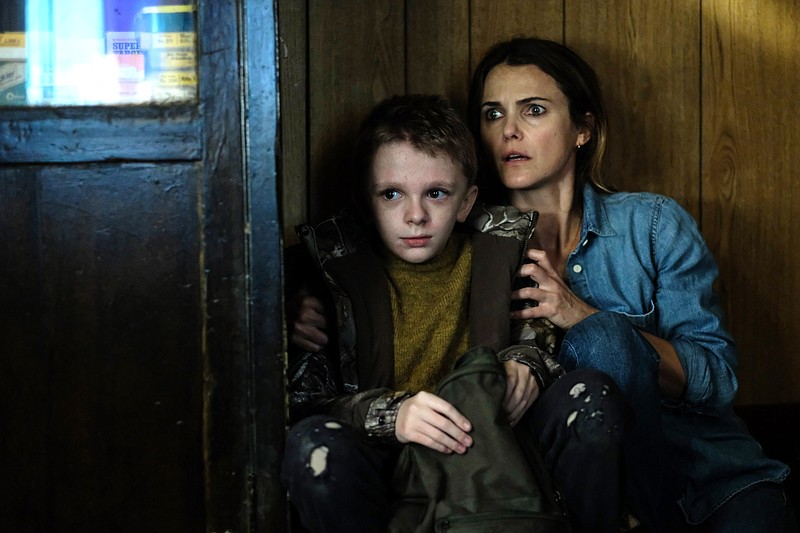 Like an NBA player who scores 45 for a team that still loses by 20, you have to feel a bit sorry for Florian Hoffmeister, the talented cinematographer ("A Quiet Passion") who has produced an extraordinarily beautiful and resonant film for Scott Cooper, a director who saw fit to stick a garish postage stamp on the middle of an otherwise remarkable painting.

While we're at it, we might want to pour one out a little for Yesi Ramirez, the casting director who assembled a formidable amount of acting talent, including a child actor (Jeremy T. Thomas), who infuses his role with appreciable gravitas you don't often find in children so young.

While "Antlers," essentially a monster movie with a ham-handed environmental message, is considerably propped up by the crew's and cast's formidable talents, Cooper's film is ultimately done in by a painfully trite script ("Is God really dead?" a 6-year-old asks his slightly older brother. "Remember what mama used to tell us," the older boy responds, "you and me was born under a lucky star"), which never fails to spell out in flashing neon letters what it's going for, and can't seem to offer a dialogue exchange that isn't maddeningly expositional (one scene between an estranged adult brother and sister fills us in on all the pertinent details between them so explicitly, it practically sounds like a synopsis -- along the lines of "a lot changes in the 20 years you've been gone since our abusive father drove you out of our house after our mother died and you moved to California and left me here by myself where I was elected sheriff and now have to work in our depressed Oregon community evicting parents with kids because the only thing that makes any money in this decaying place is selling meth").

The brother who became sheriff, Paul (Jesse Plemons), and the wayward sister who returned, Julia (Keri Russell), in order to be with him, discover the town's strange goings-on from different angles. Paul keeps finding corpses, attacked as if by a wild animal, but with tooth markings, we are told by a helpful forensic coroner, appearing to be ... human. Meanwhile, Julia, working as an elementary school teacher, becomes concerned over one of her students, the gaunt, haunted Lucas (Thomas), whose school notebooks are filled with incredibly rendered pen drawings of demon animals covered in the blood of their fresh kills.

It seems Lucas' hapless father, Frank Weaver (Scott Haze), a scuzzy meth cooker, came in contact with a vengeful American Indian spirit while deep in an abandoned mining cave, where he had set up his lab, and now lives in the attic of the family's dilapidated house along with Lucas' younger brother, Aiden (Sawyer Jones), living like a savage beast, and demanding fresh meat from his eldest son.

As Julia investigates Lucas' situation more thoroughly (and in one hilariously on-the-nose scene, she digs into his school desk to uncover three books: One about trapping forest animals, one concerned with "dangerous spirits," and his aforementioned notebook, replete with publication-level artworks depicting these evil spirits feasting on bloody flesh -- it's almost as if they might suggest something, but what?), and gets more embroiled in the child's well-being, her brother is up in the mountains, talking to the American Indian former sheriff, Warren Stokes (played, naturally, by Graham Greene), about this apparition, a Wendigo, and finding out precisely what it is they are, and exactly what they need to do to kill it for good (the sheriff helpfully offers him a book of American Indian folklore he happens to have with him in his small encampment).

These elements all come together in the climactic last scene that finds the sheriff badly wounded and Julia left to roam in the old mine shaft on her lonesome, armed with her brother's gun and whole lot of gumption, to try to save Lucas and Aiden from their father's mad rampages.

This unfortunate screenplay, penned by Cooper, along with Henry Chaisson and Nick Antosca (who wrote the short story upon which it's based), can't ever seem to leave well enough alone: Warren ends his dissemination of the Wendigo phenomena by explaining that the apparently environmentally conscious spirit is "angry," among other things, at the plight of the natural world, as Cooper immediately cuts to a drone shot of an abandoned industrial complex on the banks of a river; a "background" TV news broadcast happens to be running a story about how the EPA has agreed to a new round of "mountain-top mining" operations in the area, and so forth. It's entirely possible to agree with the film's premise -- and, outside of coal lobbyists, and big oil conglomerates, who would begin to argue otherwise? -- and still find its methodology hokey and blatant enough to make Spielberg blanch.

It would be, then, much easier to write this off as a clumsy mistake, but for the excellent mise-en-scene (and superior art direction, especially of the creature and the dismembered/exploded bodies strewn about the film -- which comes as less of a surprise when you see monster maven Guillermo del Toro was one of the producers) -- and strong work from the cast. Thomas, in particular, shines as a small boy with the burden of keeping the remains of his already bedraggled family alive and secret from everyone else around him. With his sober mein and deep-set eyes, his expression suggests far more powerfully than the lines he's forced to utter, the cost of being the lone stalwart among a family in deep crisis. If there were a way to watch the film with the dialogue tracks muted, you would have yourself a pretty extraordinary, darkly atmospheric monster flick; as it is, you have no choice but to suffer through it, along with the actors.

Rating: R, for violence including gruesome images, and for language