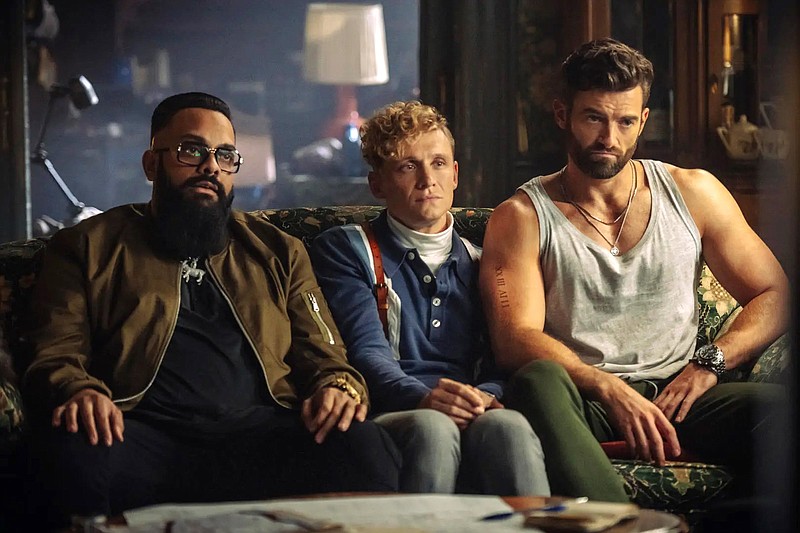 Just weeks after releasing his much talked about 4-hour (and really good) cut of "Justice League," filmmaker and self-promoter extraordinaire Zack Snyder announced he was doing a movie for Netflix that would lay the foundation for a brand-new cinematic universe. The movie was "Army of the Dead," a surprisingly fun action-horror romp that played a lot like a "Kelly's Heroes," "The Italian Job," "Dawn of the Dead" mashup.

"Army of the Dead" worked as an entertaining genre blend that smartly refused to take itself seriously. And while it clearly set itself up for a sequel, Snyder wasted no time announcing that the next installment would be a prequel centered around one of the first film's more memorable characters. It would be called "Army of Thieves" and the burgeoning franchise faithfuls wouldn't have long to wait.

"Army of Thieves" is set roughly six years before the events of "Army of the Dead," which places it near the start of the zombie outbreak (for anyone who might care about the timeline). But don't expect the undead to play a role here. Instead, this is a heist movie centered around the comically skittish safecracker Ludwig Dieter (Matthias Schweighofer). The movie fills in his backstory, revealing what led him into criminal safecracking and how he ended up chosen for the Las Vegas job in the first film. I'm still not sure anyone was clamoring for a Dieter origin story, but we got one nonetheless.

Written by Shay Hatten from a story he conceived with Zack Snyder, "Army of Thieves" introduces us to the jittery German before he became Ludwig Dieter. We first meet him as a lowly bank teller, failed YouTuber, and safecracking enthusiast who goes by the name of Sebastian. After posting a video on his channel about renowned yet tortured safe designer, Sebastian is surprised by a comment containing a mysterious invitation to what turns out to be a high-stakes underground safecracking competition (are those a thing?).

Sebastian predictably wins, but it turns out to be more than a competition. He's unwittingly auditioning for a professional thief named Gwendoline (Nathalie Emmanuel of the "Fast & Furious" franchise) who's planning a particularly ambitious heist that requires a skilled safecracker. Tired of his generic everyday routine and ready to break free from the monotonous and the mundane, Sebastian agrees to join her and her crew of Interpol's most wanted.

The rest of Gwendoline's band of criminals are Korina (Ruby O. Fee), a master hacker because you need to get past those pesky security systems; Rolph (Guz Khan), a skilled driver to ensure a clean and swift getaway; and the preening Brad Cage (Stuart Martin), who Gwendoline describes as "our very own real-life action hero." All three bring personality and flavor to the story, but they're more cogs than meaningful characters.

The job is a tricky one -- break into the late Hans Wagner's three master safes affectionately named Rheingold, Valkyrie and Siegfried. They're located in "secure" banks in Paris, Prague and St. Moritz, which provides the catalyst for some good old-fashioned movie globetrotting. But hot on their heels is Interpol Agent Delacroix (Jonathan Cohen), a wildly overcooked character whose dogged pursuit of Gwendoline and her crew is driven by motivations that are never all that convincing.

In addition to being the film's star, Schweighofer also directs with a sleek Eurocentric style that makes for a nice contrast to Snyder. Not only does "Army of Thieves" have a different look, but Schweighofer and Hatten bring along a much lighter touch. Snyder's movie had plenty of funny moments (most from Schweighofer himself), but this film goes heavier with the humor and even throws in a romantic angle that's sweet but too thinly sketched for us to buy into.

There aren't many surprises in "Army of Thieves" which strips the movie of any suspense. You see it most in the individual heist sequences themselves. For banks that go to all the trouble to have one of the most impenetrable and complex safes ever made, you would at least expect a mildly competent security apparatus. Yet the heists (though framed as daring) are laughably easy to pull off. A hack or two here, a glaringly obvious diversion there. Done. In fairness, each safe gets a little more challenging, but it's still hard to find much tension.

Interestingly, outside of three unbilled cameos, there's very little in "Army of Thieves" linking it to its franchise predecessor. We do get a few passing nods to the zombie uprising happening overseas and Sebastian occasionally has these random dreams of being attacked by the undead (a premonition, clairvoyance, something else? Who knows?). But in a sense that's part of this movie's charm. It truly feels like its own thing. Sure, it's pretty lightweight and utterly preposterous. But it has its moments and the performances from Schweighofer and Emmanuel elevate things enough to keep our attention.