OPINION | REVIEW: ‘The French Dispatch’ takes viewers back to the glory days of literature 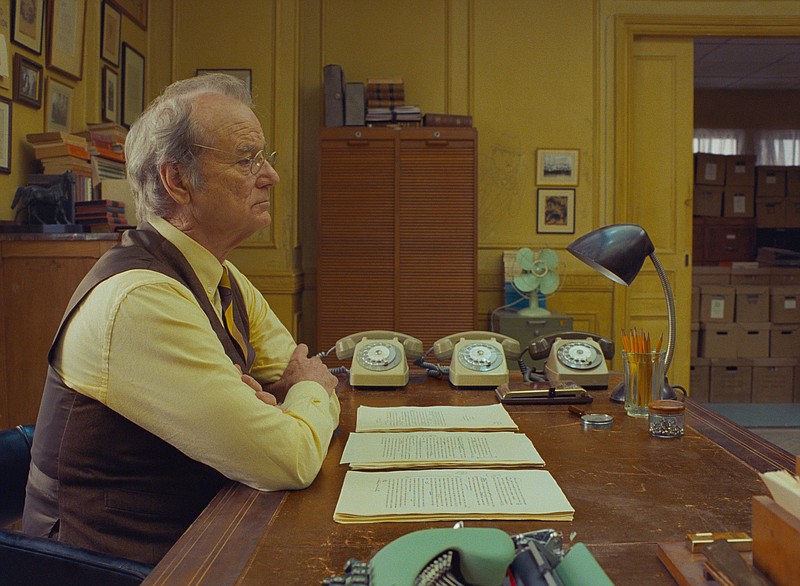 Gruff but compassionate Arthur Howitzer Jr. (Bill Murray) is the editor of a Kansas newspaper’s France-based arts and culture supplement in Wes Anderson’s “The French Dispatch.” Howitzer is based on The New Yorker’s first two editors, Harold Ross and William Shawn.

About 30 years ago, the fiction writer Tony Earley wrote a short story called "The Prophet From Jupiter," for Harper's Magazine, which concerned the goings-on of a particular town, from the perspective of a semi-omniscient narrator so close to the characters, it was as if perched on their shoulders. It's a sprawling, astonishing work that seemed capable of encompassing an enormous swath of material, a sentiment echoed by its author, who wrote as much in the author's notes after it was accepted for the "1994 Best American Short Stories" anthology. Earley claimed the story was smarter than he was, capable of accepting everything he could think of to throw into it.

As far as constructed vehicles go, Wes Anderson is an old-hand at creating similarly studded tableaus that allow him to follow his specific -- and potent -- creative whimsy, wherever he may like it to go. Indeed, as a director, now, of some 10 features, one can confidently say he has taken the very concept of "quaint" and "fanciful" (the two synonyms for "whimsy" readily proffered by google docs), and turned it into actual, tangible art.

Still, "The French Dispatch" might be his crowning achievement. Not as far as his actual films go -- I would place this somewhere between "Rushmore" and "Moonrise Kingdom" in his oeuvre -- but in terms of creating a structure and framework from which to operate his unique blend of sterling composition, art-house styling, prosaic wordsmithing, and OCD mise-en-scene, he might well have reached his zenith.

Said frame is actually based firmly on the wit and droll substance of vintage copies of "The New Yorker" (the end credits include many devilish homages to the classic New Yorker cover paradigm), a literate-slightly-dry tone that fits Anderson's celebrated stylistics like a well-pedicured foot into an exquisitely fitted argyle sock.

After establishing a brief history of the "Dispatch," a former section of the Liberty, Kansas Evening Sun, known as "Picnic" got hijacked by the publisher's son, the late Arthur Howitzer, Jr. (Bill Murray), who intended to stay for several months in Ennui, France, and ended up living there for five decades (the magazine's existence is listed from 1925-1975), the film is divided up, like the magazine, into separate stories, more or less narrated by the writers of the pieces themselves.

The first piece, from the "Arts & Artists" section, set roughly in the '50s, as described via art lecture from the writer, J.K.L. Berensen (Tilda Swinton), concerns an incarcerated mad genius of a painter, Moses Rosenthaler (Benicio Del Toro), his ravishing muse, prison guard Simone (Lea Seydoux); and Julian Cadazio (Adrien Brody), the also-incarcerated art dealer who "discovers" Moses' work, and sets up a megadeal, contingent on the artist producing a new body of material.

The second section, in the '60s, "Revisions to a Manifesto," as recounted by Lucinda Krementz (Frances McDormand), follows the trials and tribulations of a young political student, Zeffirelli (Timothee Chalamet), who leads a campus uprising with the contentious help of fellow student Juliette (Lyna Khoudri), and who naturally falls in the sack with Krementz herself, who assists the lad by editing his own manifesto, to the consternation of Juliette, among others.

Finally, we land on a story retold from memory by the writer Roebuck Wright (Jeffrey Wright), during a TV interview, about a prison commissaire (Mathieu Amalric), whose young son is abducted by a group, masterminded by the Chauffeur (Edward Norton), and has to use his prize chef, Nescaffier (Stephen Park), to scheme a way to get the boy returned safely.

Along the way, there are many more Anderson casting shout-outs (including Owen Wilson, Elisabeth Moss, Jason Schwartzman, Bob Balaban, Lois Smith, Christoph Waltz, Cecile de France, Saoirse Ronan, Griffin Dunne and Willem Dafoe, to name but a few), many of whom feel like they happened to stop by the set for a bit, and more delightfully witty details -- a sign at the Dispatch's office reads "Silence: Writers Writing" -- than you can possibly take in at a single viewing. Indeed, it's a bit like visiting a foreign country so stupendously beautiful everywhere you look, your brain has to shut down partially to not be overwhelmed.

Throughout the film, Anderson playfully toys with his composition. In one particularly stunning long shot near the beginning, a waiter carries a tray of drinks outside and up a winding set of exterior stairs, his path starting from bottom left and up through the frame, coming in and out of view as he makes his way up. In another, a man and woman are lying opposite of each other in a post-coital repose, their heads next to each other. Anderson keeps switching from one overhead shot to another, depending on who's speaking, explicitly breaking the director's line each time.

Color, as always with Anderson's work, plays a significant role. The color palette is equally expressive, from rich, deep hues, to lighter pastels, to black and white, losing his more traditional sense of formalism in favor of something a good deal more eclectic. It feels as if he's pulled out all the aesthetic stops with this film, opening the floodgates to his signature style and letting it rip. Despite its distinctly meticulous construction, it feels like one of the most liberated and uninhibited of his works.

Like Del Toro's manic artist, the performances, too, seem on the verge of unhinged. From Brody's mannered mania, to Seydoux's stern coquettishness, Anderson has coaxed sterling turns from most of his star-laced cast (one of the few misses, oddly, is Chalamet's young intellectual, who is meant to be tortured and impulsive, but comes across as adenoid and wispy as his starter-kit mustache), who take to their richly decadent material as if ravenously devouring a blancmange.

There is also a bittersweet burn of nostalgia, amid this colorful garden, a loving paean to a more literate time in which devoted readers would carefully intake such dense, fanciful prose, and life was all the more vibrant and compelling for it. It's the antithesis of internet/meme culture in which everything is consumed whole, without so much as a chew, and one's appetite is seemingly never slaked as a result.

Every frame of every shot feels perfectly placed, an immaculately manicured garden of such earthly visual delights, one doesn't quite know where to begin. Even basic establishing shots, framed impressively by longtime collaborator Robert Yeoman, are so artfully composed, the effect is well near intoxicating. The narrative, set as it is within layers of frameworks nestled against and within one another, is almost beside the point to the conceptual splendor of what we witness on the screen. Rather, like one of Max Fischer's elaborate school productions in "Rushmore," there is more pure, undistilled Anderson here than can be safely consumed in a single sitting. It's a full-length Anderson AMSR (autonomous sensory meridian response) experience, precisely calibrated to the director's soothing pitch.

Rating: R, for graphic nudity, some sexual references and language 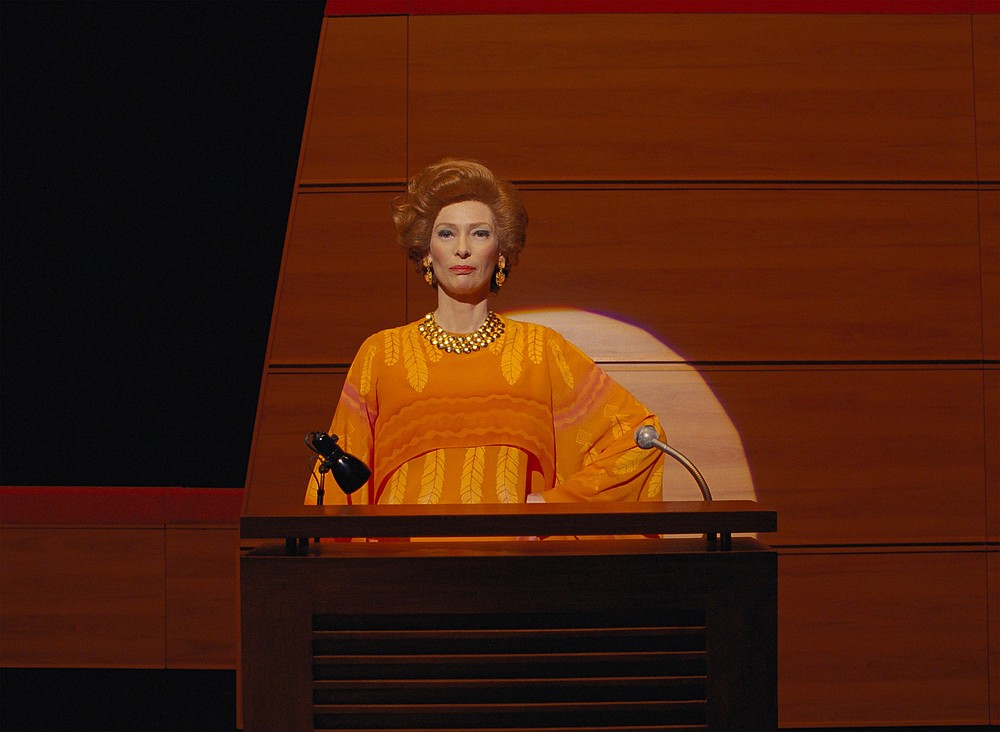 Self-described “art groupie” J.K.L. Berensen (Tilda Swinton) is based on Rosamond Bernier, who gave popular, highly theatrical lectures that included anecdotes about her famous friends such as Pablo Picasso and Henri Matisse before founding her own art journal. The character is one of several based on real people in Wes Anderson’s “The French Dispatch.” 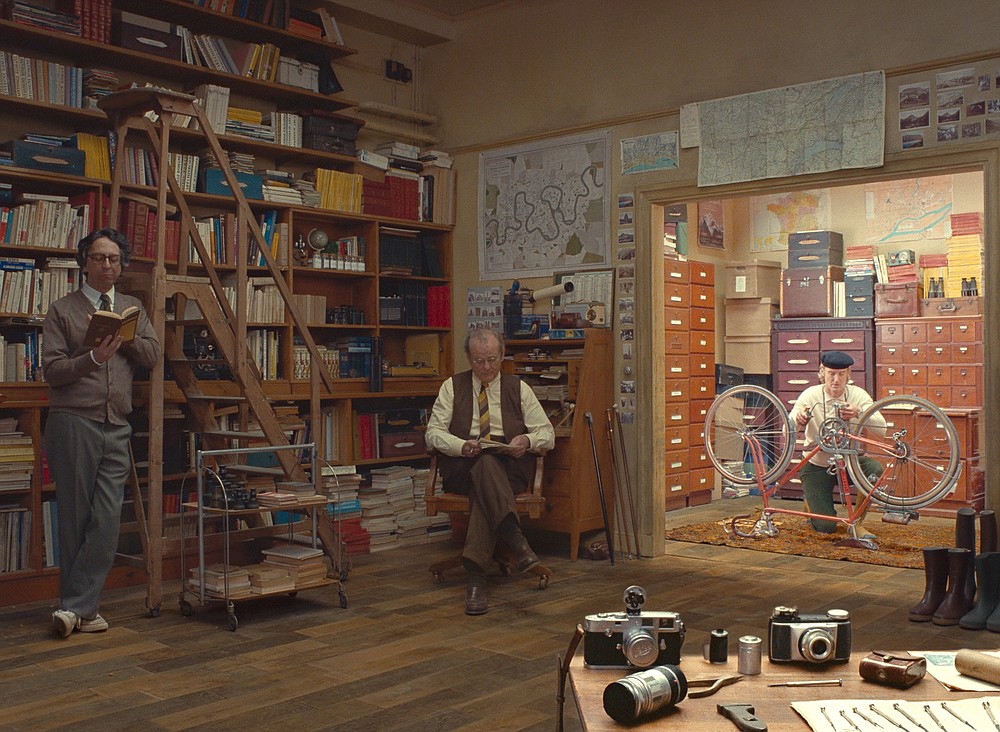