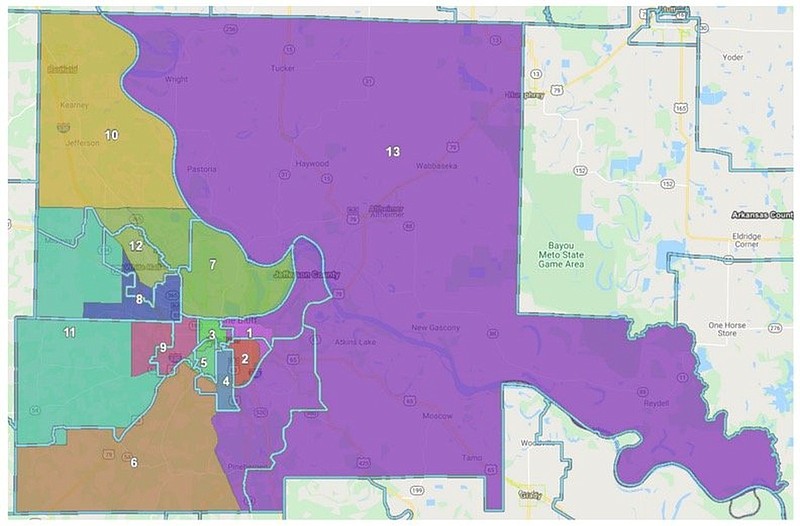 The shapes outlined in blue represent the previous justice of the peace districts, with the new districts shaded in. (Graphic special to the Commercial/DataScout)

A change in population brought about many changes to the districts represented by each Jefferson County Justice of the Peace. Here is a breakdown of each district, along with the reason for change:

• West boundary with District 3 is changed to equalize populations and follow the school district zone.

• Gained the easternmost portion of District 2 in order to shift population out of 2 and keep similar areas together; follows existing precinct line.

• Lost the northeast corner between drainage creek and interstate to District 1 to grow 1 and shed population; follows existing precinct line.

• Southeast boundary with District 2 cleaned up to be more compact and follow school district zone.

• Lost western portion to 6 (and 5) to make more compact and to shift population to 6 (and then to 13); now follows school district zone.

• Gained a portion of District 9 in the southwest to improve the compactness of 9, shed population from 9, and to decrease precinct parts.

• Lost population in the north to District 3 (including gains from 9 mentioned above).

• Northwest border with 11 cleaned up to follow Precinct and Township Boundaries and decrease precinct parts.

• Gained small portion in north that is southeast of South Camden Road from 9 to clean up a boundary and equalize population.

• Lost portion on other side of I-530 to clean up the boundary of 5 to follow interstate.

• Lost large portion of the northeast around the eastern boundary of Pine Bluff due to District 13 needing to gain substantial population.

• JP 6 incumbent location prevented the boundary from being cleaner and following roads; ended up following transmission line to prevent moving incumbent; huge census block (441 population) east of the incumbent was part of the problem.

• Western border cleaned up to follow White Hall municipal boundary and then Arkansas 365.

District 8 -- minor population increase, area needed to decrease and also shift to account for changes to other districts.

• Gained the southwest portion of White Hall because District 12 had to shrink.

• Lost rural western portion of the district to 11 to even out gains from 12 and to allow 11 to grow; now follows White Hall School District boundary and is fully within the school district.

• Gained western "spiral" of Pine Bluff city limits along with rural blocks stretching out to township and school district zone lines. This allows for further annexations in this area that might cause awkward or small precinct slits in the future.

• Southern boundary moved northward to align with Township and Precinct line in order to shed a large amount of population.

• Southern border cleaned up to follow precinct and township boundaries.

• South and western borders moved inward to follow Sheridan Road and I-530 in order to shed population.

• Northwest border continued northwest into District 10 to follow the corridor between I-530 and Arkansas 365 and township line to balance population while creating room for possible city expansion (without creating parts).

• Gained a large portion of District 6 in the south and around the southern portion of Pine Bluff.