President follows with Macron visit by Compiled by Democrat-Gazette Staff From Wire Reports | October 30, 2021 at 4:30 a.m. 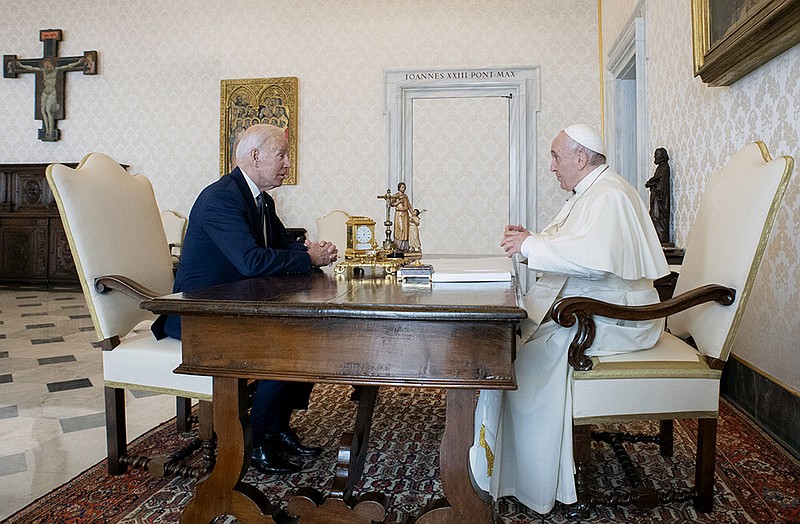 President Joe Biden meets with Pope Francis at the Vatican on Friday in talks that ran overtime and included an exchange of gifts. Biden and Francis had previously met three times, but this was the first since Biden became president. More photos at arkansasonline.com/1030g20vatican/. (AP/Vatican Media)

ROME -- Face to face at the Vatican, President Joe Biden held extended and highly personal talks with Pope Francis on Friday and came away saying the pontiff told him he was a "good Catholic" and should keep receiving Communion, although conservatives have called for him to be denied the sacrament because of his support for abortion rights.

The world's two most prominent Roman Catholics ran overtime in their discussions of climate change, poverty and the coronavirus pandemic, a warm conversation that also touched on the loss of the president's adult son and included jokes about aging well.

Biden said abortion did not come up in the meeting. "We just talked about the fact he was happy that I was a good Catholic and I should keep receiving Communion," the president said.

The apparent show of support would mark the first time the pope has explicitly pushed back against a campaign by conservative bishops in the United States to deny Biden the sacrament because of his support for abortion rights.

The president's support for same-sex marriage has also put him at odds with many U.S. bishops, who are to meet in their annual fall conference in November -- and will find themselves debating a possible rebuke of a U.S. president just weeks after their boss spent so much time with Biden that all their subsequent meetings were thrown off by an hour.

[Video not showing up above? Click here to watch » arkansasonline.com/1030bidenpope/]

Video released by the Vatican showed several warm, relaxed moments between Francis and Biden as they repeatedly shook hands and smiled. Francis often sports a dour look, especially in official photos, but he seemed in good spirits Friday. The private meeting lasted about 75 minutes, according to the Vatican, more than double the normal length of an audience with the pontiff.

The pair sat across from each other at a desk in the papal library, accompanied by a translator. They then proceeded to an exchange of gifts and a broader meeting including the first lady and top officials.

"Biden thanked His Holiness for his advocacy for the world's poor and those suffering from hunger, conflict and persecution," the White House said. "He lauded Pope Francis' leadership in fighting the climate crisis, as well as his advocacy to ensure the pandemic ends for everyone through vaccine sharing and an equitable global economic recovery."

Biden takes pride in his Catholic faith, using it as a moral guidepost to shape his social and economic policies. He wears a rosary and attends Mass weekly.

Biden said he had a "wonderful" meeting and that the pope prayed for him and blessed his rosary beads. He said the prayer was about "peace."

A dozen Swiss Guards in their blue-and-gold striped uniforms and red-plumed halberds stood at attention in the San Damaso courtyard as Biden and his wife, Jill Biden, arrived. They were received by Monsignor Leonardo Sapienza, who runs the papal household, and then greeted one by one the papal ushers, or papal gentlemen, who lined up in the courtyard.

"It's good to be back," Biden said as he shook hands. "I'm Jill's husband," he said before he being ushered into the frescoed Apostolic Palace and taken upstairs to the pope's private library.

According to the Vatican, Biden presented Francis with a woven chasuble, or liturgical vestment, made in 1930 by the famed papal tailor Gammarelli and used by the pope's Jesuit order in the U.S., where it was held in the archives of Holy Trinity Church, Biden's parish in Washington. The White House said it would make a donation to charity in the pope's name.

Biden also slipped what's known as a challenge coin into the pope's palm during a handshake, and hailed Francis as "the most significant warrior for peace I've ever met."

The personalized coin depicts Biden's home state of Delaware and a reference to his late son Beau's military unit, the 261st Theater Tactical Signal Brigade. Biden told Francis that Beau, who died of brain cancer in 2015, would have wanted him to present the coin to the pope.

"The tradition is, and I'm only kidding about this, but next time I see you, if you don't have it, you have to buy the drinks," Biden said, referring to the coin. He added: "I'm the only Irishman you've ever met who's never had a drink."

Biden, 78, also relayed the story of American baseball player Satchel Paige, a Black pitcher who played late into his 50s, in a parable about aging. "'How old would you be if you didn't know how old you were?" Biden quoted Paige as saying. "You're 65, I'm 60," Biden added, as Francis, 84, pointed to his head and laughed.

Francis presented Biden with a ceramic tile depicting the iconography of the pilgrim, as well as a collection of the pope's main teaching documents, the Vatican said. In the Vatican video, he could be heard asking Jill Biden to "pray for me."

Biden is visiting Rome and then Glasgow for back-to-back summits, first a gathering of the leaders of the Group of 20 leading and developing nations and then a global climate conference.

Biden and Francis have previously met three times, but Friday's encounter was their first since Biden became president.

The Vatican spokesman declined to comment on Biden's remarks about Communion, noting that the Vatican doesn't comment on the pope's private conversations beyond what is written in the official communique, which made no mention of the issue.

The U.S. Conference of Catholic Bishops issued a statement after the Vatican meeting that didn't address Biden's remark about Communion. Instead, the statement suggested that the president would not be singled out in any document emerging from the bishops' meeting next month.

The document "is intended to speak to the beauty of meeting Jesus Christ in the Eucharist and is addressed to all Catholics," the statement said.

There was no immediate response to queries sent to seven bishops engaged in the debate.

Francis has stressed that he will not reject political leaders who support abortion rights, though Catholic policy allows individual bishops to choose whether to prevent people from receiving Communion.

After a six-week diplomatic uproar over the scuttled submarine deal and accusations of U.S. duplicity, Biden made a one-on-one effort Friday to mend fences with Macron of France by admitting that, yes, the matter could have been handled better.

"What we did was clumsy," Biden told reporters hours after arriving in Italy to attend a summit with other world leaders. "It was not done with a lot of grace."

By delivering an in-person mea culpa to the leader of one of America's oldest allies, Biden signaled that he was ready to move on from an embarrassing spat that grew from a secretive U.S. agreement with Britain and Australia to supply Australia with nuclear-powered attack subs, effectively canceling out a lucrative and strategically important French contract.

"I was under the impression that France had been informed long before that the deal was not coming through," Biden said, effectively inviting his negotiating partners to shoulder some of the blame after weeks of weathering French ire. Later in the day, the two issued a statement that confirmed Biden's support for America's European allies to develop a "stronger and more capable European defense" as a complement to NATO.

The meeting underscored the diplomatic challenges facing Biden as he prepared for the Group of 20 meeting this weekend, where he will try to secure a global agreement to set minimum levels of corporate taxation, aimed at stopping companies from stuffing income into tax havens. He will also prod other countries to assist in uncorking supply chain bottlenecks, announce a global task force to fight the coronavirus and urge investments to curb global warming.

One drama-free meeting came later in the day, when Biden sought to strengthen relations with Draghi. The Italian prime minister is becoming increasingly important as a European leader who believes that more military independence can coexist with a solid commitment to NATO and a lasting alliance with the United States.

Biden told Draghi that he viewed a strong European Union -- even one with a unified military defense -- as in the interest of the United States, according to a person with knowledge of the conversation. At their meeting at the Chigi Palace, seat of the Italian government, Biden also said Italy and the United States needed to show that democracies can function successfully and that Draghi was doing that.

The White House did not return a request to verify those private remarks.

Information for this article was contributed by Josh Boak, Zeke Miller, Nicole Winfield and David Crary of The Associated Press; and by Katie Rogers and Jason Horowitz of The New York Times. 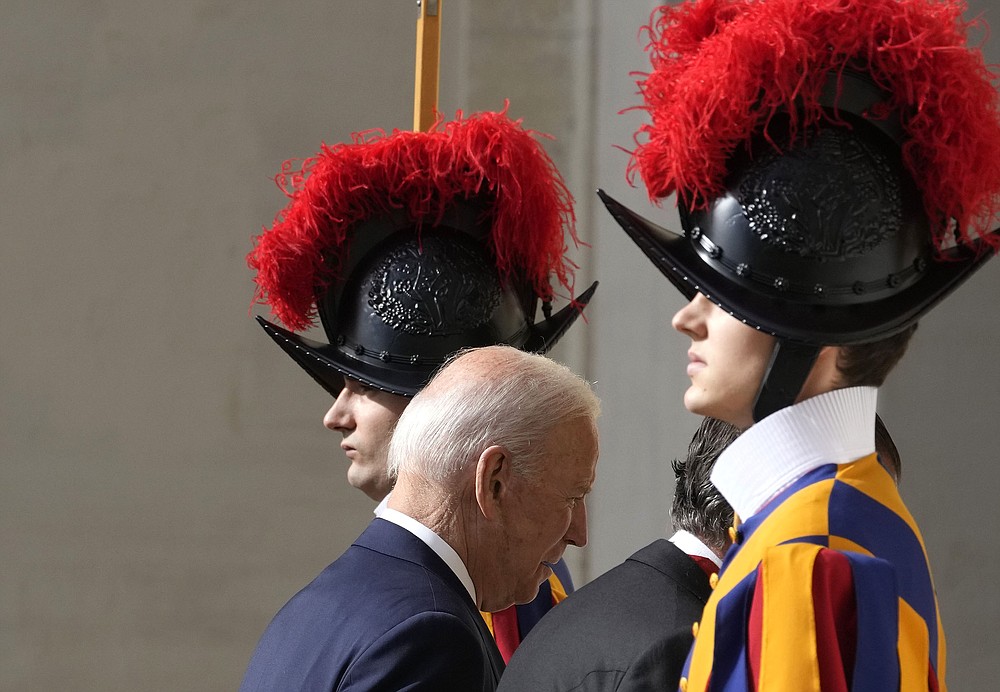