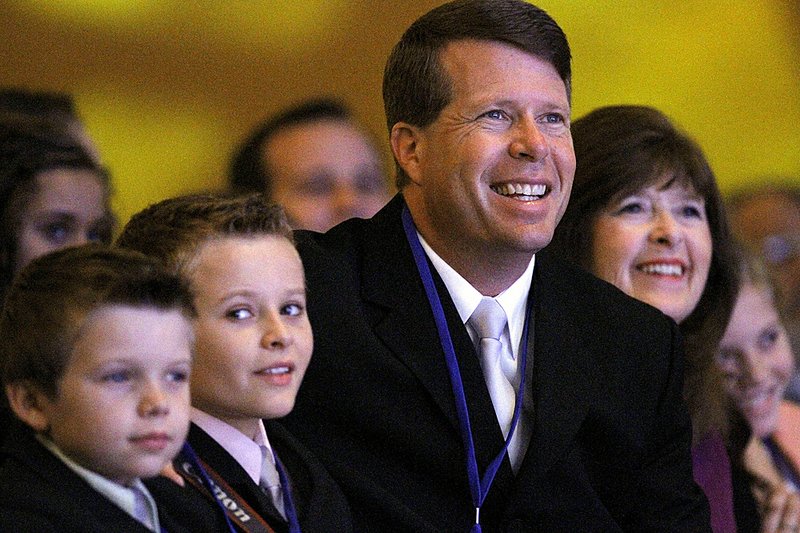 Jim Bob Duggar and some of his children listen to Mike Huckabee at the Values Voter Summit in 2010. Taking note, Huckabee said, “God bless you, Jim Bob,” for helping swell the crowd. Duggar supported Huckabee in the 2008 GOP contest.

Duggar was born and raised in Springdale, attended Springdale Public Schools and graduated from Shiloh Christian High School. He acquired his real estate license at 18 years of age and is a commercial real estate investor.

"I am honored to announce my candidacy for Arkansas State Senate District 7," Duggar says in a statement. "Northwest Arkansas is my lifelong home. It's where my wife, Michelle, and I have raised our 20 children. It's where we've grown our small businesses. It's where we've built a life centered around our faith, family and friends."

Jim Bob and his wife are best known for being part of his family's cable television reality show before it was canceled. One of his sons, Joshua, 33, of Springdale is scheduled to begin trial in federal court on Nov. 30 on two counts involving receiving and possessing child pornography.

"I think the effect is certainly unknown, but it's important to note that Josh is a grown adult," said Chad Gallagher, a longtime spokesman for the family, about any impact on the Senate bid. "Sadly, no families is immune from tragedy, heartbreak or impact from the decisions of the ones they love. Jim Bob believes that all of his life's experiences, even the difficult ones, have only deepened his faith and broadened his perspective and compassion toward others who face difficulties in their families."

Eads resigned to take a lobbying job with a Little Rock firm. The Arkansas Constitution assigns the governor the duty of setting a special election to fill state legislator vacancies. Gov. Asa Hutchinson said Thursday he will schedule an election to replace Eads soon.

"I'm running for state Senate because these are unprecedented times in our nation," Duggar's statement says. "Out-of-control bureaucrats have put politics over common-sense policy with government mandates that force people to choose between earning a paycheck and violating their personal rights and beliefs."

"Now more than ever, we need a bold voice that is pro-family, pro-business, pro-gun and pro-life," he said. "It's time for conservatives to demand courageous leadership that puts Arkansas families, jobs, and our constitutional liberties first. I look forward to being your voice in the Arkansas State Senate."

Duggar will remain eligible to run again if he wins the special election, a spokesman for the Secretary of State's Office said.

This is Duggar's second bid for this Senate district. He was defeated in the 2006 Republican primary by Bill Pritchard of Elkins, who went on to win that year's general election.