Skeletal escalation: 12-foot-tall skeleton decorations are taking over — and they keep getting bigger 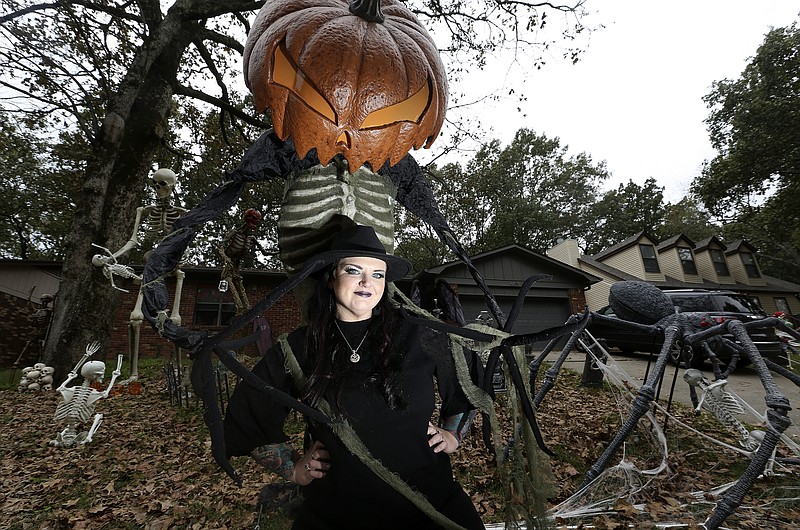 When Valerie Hitchcock and her family moved to North Little Rock from out of state, there was a shortage of moving vans. She was forced to make choices about what to bring — her Halloween decorations made the cut. (Arkansas Democrat-Gazette/Thomas Metthe)

In April, Jake Levin got a letter from his homeowners association. "The giant skeleton on [the] front lawn needs to be put away," it said. "Holiday decor needs to be taken down immediately after the holiday."

The giant skeleton in question was Indiana Bones, the 12-foot Home Depot skeleton Levin, 27, bought from a reseller for $525 amid the madness of October 2020.

But one does not simply put away a 12-foot skeleton, and so Levin had adapted Indiana Bones to each subsequent holiday: a turkey leg for Thanksgiving, a Santa suit for Christmas, a leprechaun costume for St. Patrick's Day. This tactic, along with a conspiracy among neighbors to move Indiana Bones periodically from yard to yard, has allowed Levin to avoid any fines.

Nevertheless, he understands that a disapproving HOA is not the only threat to the 12-foot skeleton.

"It kind of loses its wow factor when it's just there all the time," says Levin, who lives in Oakland, Fla.

Where do we go from here? It's a question many people are asking in the aftermath of 2020, but especially those who spent $300 or more last year on gigantic skeletons.

They were the perfect accessory to an extreme year. As life resumes its normal proportions, do you stand them down? Or do you escalate?

For Gerry Harrod, 57, escalation is normal.

"Each year, we try to do a bigger and better display," he says.

So, he bought two more gigantic skeletons to go with the one he set up last year. Harrod, of Coquitlam, British Columbia, owns a Mini Cooper, which is insufficient to haul giant bones. Last year, he borrowed a friend's truck. This year?

Hold up, Gerry — you bought a Ford F-150 just so you could transport giant skeletons? 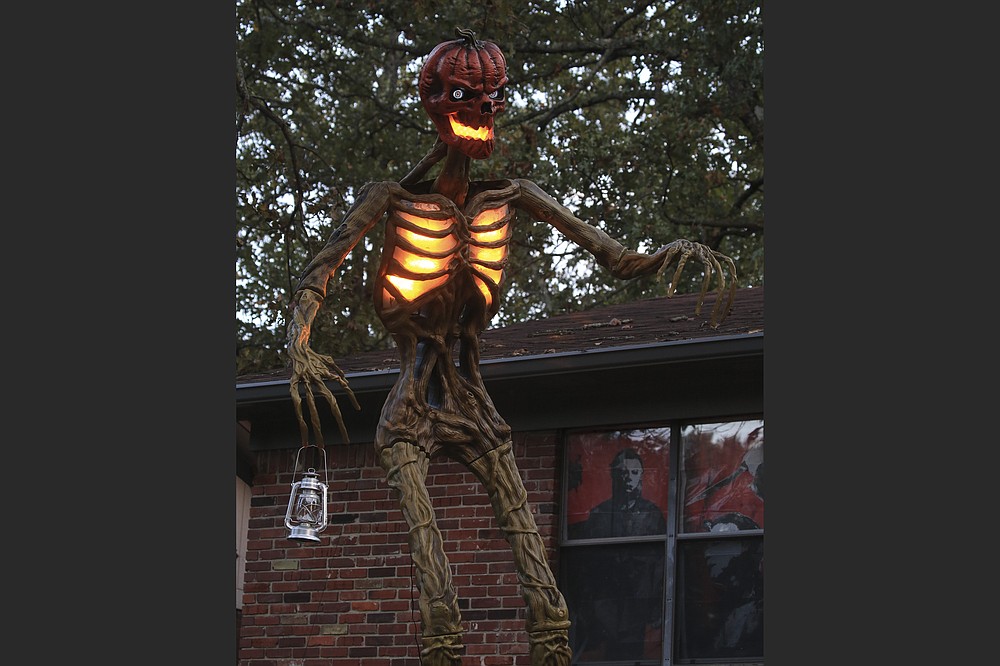 This year, the Inferno, a 12-foot skeleton decoration with menacing pumpkin head, was highly sought after but rarely found by Halloween decorators. Hitchcock managed to get one after someone in a Halloween enthusiasts Facebook group mentioned there was an Inferno available in Fort Smith. She made a call, made the trip and scored her prize. (Arkansas Democrat-Gazette/Staton Breidenthal)

Along with the two additional skellies, Harrod bought an Inferno — Home Depot's own attempt at escalation.

"It's like, you've always got to one-up yourself every year," says Lance Allen, decorative holiday merchant at Home Depot. "So that is going to be the challenge of that item."

Heavy is the head that sources and imports the gigantic skull! Allen is responsible for all of this. He is the man who blessed us with a taller set of femurs than Halloween celebrators knew they wanted. Amid last year's skeleton craze, Allen understood that recapturing the magic would not be easy.

The Inferno resembles the original 12-foot skeleton, but at a slightly less-advanced stage of decomposition. Its frame is still thick with sinew, and there's some kind of membrane around its chest cavity, which lights up. Also, instead of a human skull, the Inferno's head is a pumpkin, and its legs are stalks.

It's harder to find in stores in certain areas, which has made the Inferno an instant status symbol in the giant skeleton-owning community.

"We felt like we had to up the ante this year," says Daisy Hugenberger.

She and her husband, Chris, would visit their Boston-area Home Depot every few days or so, pestering employees about when they expected new inventory. In early September, an employee told Chris to be patient for just a few more days while they set up the display. The next time he was in the store, Chris spied an Inferno in a roped-off, employees-only area, and asked a different employee if he could have it. She shrugged and said yes. He had to order an extra-large Lyft to get it home.

Daisy is convinced their newest decoration has staying power. "It'll probably be a family heirloom," she says.

"The 12-foot skeleton's just iconic. It's a skeleton. You can do whatever the hell you want with it," says Anthony Capobianco, 35, a Columbus, Ohio, resident who has four skellies and, now, two Infernos in his macabre menagerie. 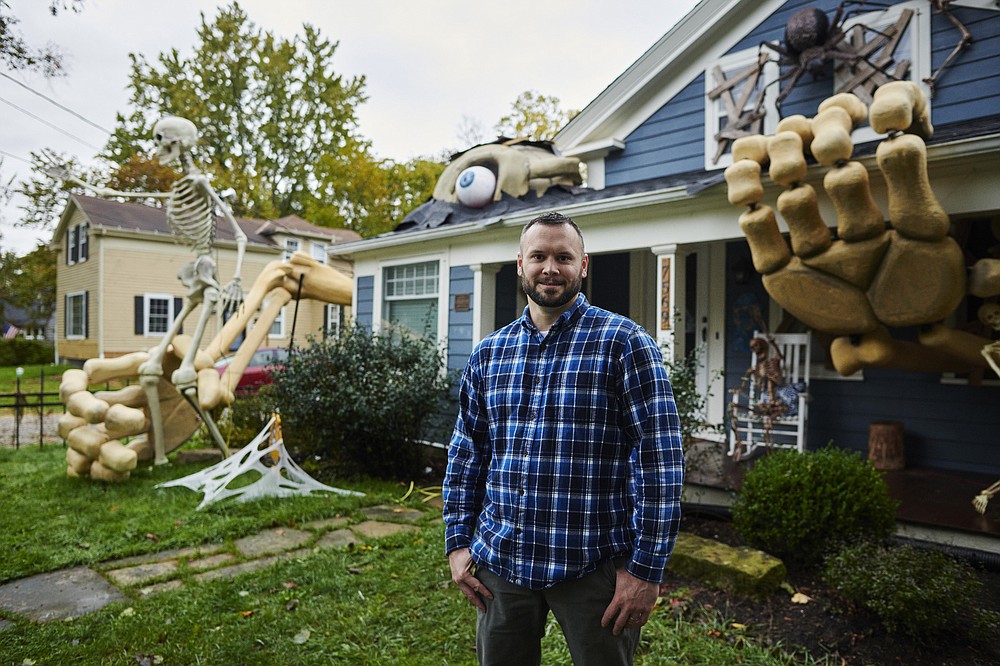 Alan Perkins poses with the Halloween display he has created in front of his home on Oct. 22 in Olmsted Falls, Ohio. (The Washington Post/Angelo Merendino)

Going large on Halloween is kind of Perkins' thing. Every year he does a huge display: In past years he has built pirate ships, a Lego Batmobile and even a realistic-looking plane crash. This year, he decided to build a skeleton so humongous that it shifted the scale of skeleton-theme decor by yet another order of magnitude.

Perkins bought Styrofoam sheets and hand-carved them to make arms and a skull about six times the size of the giant Home Depot skeleton. (For reference: The eye is made out of an exercise ball.) He posed the extremities so they appear to protrude from his house, grasping at the 12-footer as if it were a doll.

The whole project took him more than a month to complete. But the rewards are manifest: "I think I might have the largest skeleton," he says. "If somebody has a bigger one, I haven't seen it."

The 12-foot skeletons are still large, regardless. And for second-year owners who didn't leave theirs up all year long, storing the bones is not quite as simple as stashing string lights or trashing jack-o'-lanterns. 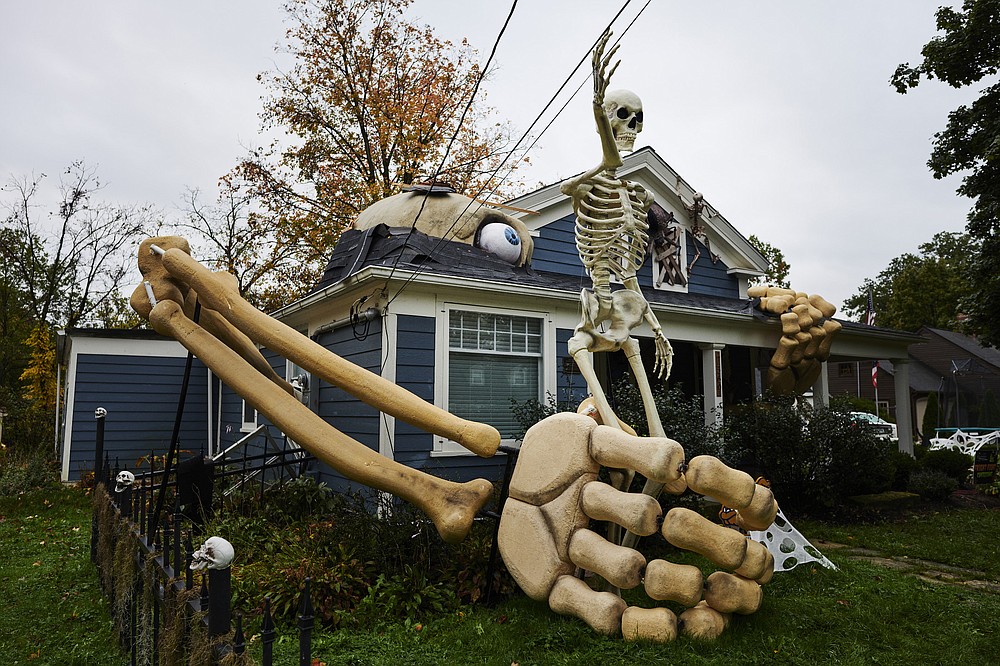 Skeletons and other Halloween decorations fill the yard in front of Alan Perkins’ home. (The Washington Post/Angelo Merendino)

Michelle Soliman, 38, and her husband, David, stored their two "bone children" in an undeveloped elevator shaft in their house in New Orleans.

"We have, literally, a closet full of skeletons," Soliman says.

"We're going to have to get a storage unit," says Shauna Hardy, 41, of Warner Robins, Ga.

Hardy's human daughter, Dylan, is obsessed with skeletons. Last year, "She had a little 3-foot skeleton and she treated it like a baby doll," Hardy says. "She would carry it around and put it in her stroller." So imagine 3-year-old Dylan's excitement this year when her parents set up a 12-footer in their front yard.

"Our other daughters were like, 'Well, if Dylan gets a skeleton, we want a skeleton,'" Hardy says. 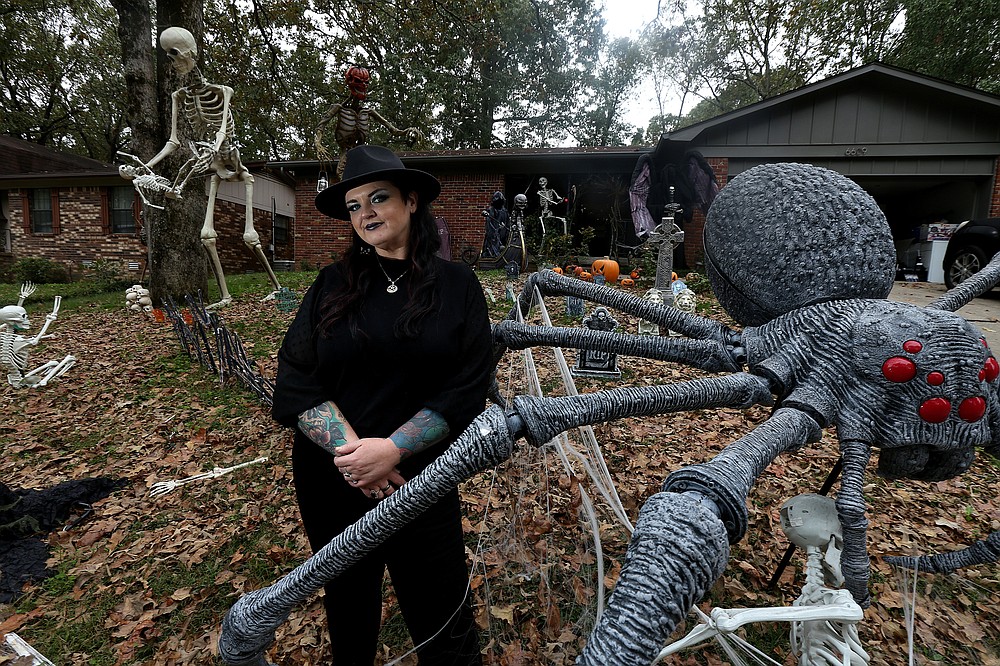 “Hallowqueen” Valerie Hitchcock and her family’s love of the holiday is obvious by the display at their home. (Arkansas Democrat-Gazette/Thomas Metthe)

A FAMILY MADE OF BONES

She has five children. She now owns five skeletons and two Infernoes, which represent her and her husband in their front-yard skeleton family — a total investment of more than $2,400.

The sacrifices people make for their (skeleton) children. When Valerie Hitchcock, 41, moved from Reno, Nev., to North Little Rock in March, moving vans were in short supply due to the pandemic, and she couldn't get the bigger truck she needed for all her stuff.

Her 12-foot skeleton made the trip. Her dining room furniture didn't.

Are gigantic skeletons just part of life now? How much longer can the arms race continue? What does this es-skell-ation mean for 2022? Will we live to see a 15-foot skeleton? A 20-footer? A 12-foot Frankenstein's monster? (This is a popular request on Facebook.) A 12-foot animatronic statue of David S. Pumpkins? (Nobody is asking for this.)

Lance Allen, the Home Depot decorations guy, refuses to say how far the company is planning to push this thing. But he does say the product lineup is already set for next year.

"I do think we're going to step our game up," he says.

Hardy, the Georgia mother of 12 (five kids, five skeletons, two Infernos), is pretty sure where this is going for her family.