Summit host calls for push in vaccines to poor nations by Compiled Democrat-Gazette Staff From Wire Reports | October 31, 2021 at 5:06 a.m. 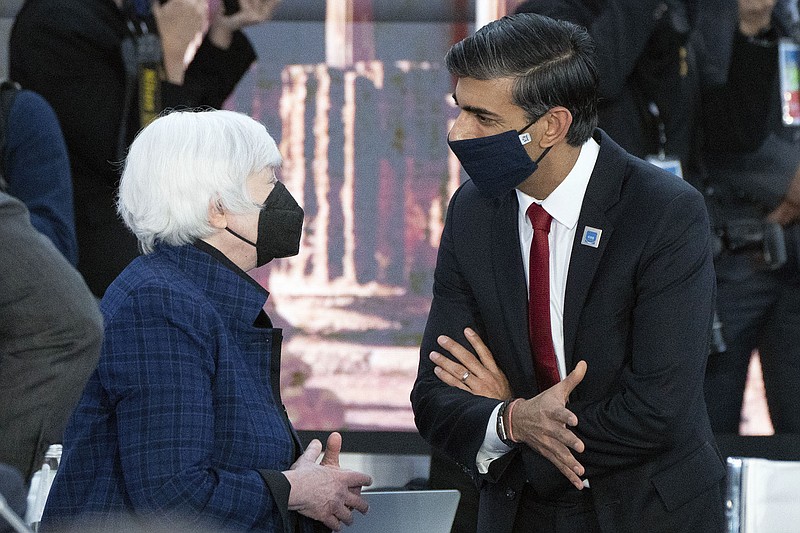 Britain's Treasury chief Rishi Sunak, right, talks to U.S. Treasure Secretary Janet Yellen during the opening session of the G20 summit at the La Nuvola conference center, in Rome, Saturday, Oct. 30, 2021. The two-day Group of 20 summit is the first in-person gathering of leaders of the world's biggest economies since the COVID-19 pandemic started. (Stefan Rousseau/Pool Photo via AP)

ROME -- President Joe Biden and other world leaders gathered for the Group of 20 summit formally endorsed a new global minimum tax Saturday, capping months of negotiations over the groundbreaking accord.

A global minimum of 15% would aim to reverse the decades-long decline in tax rates on corporations across the world, a trend that experts say has deprived governments of revenue to fund social spending programs.

[Video not showing up above? Click here to watch » arkansasonline.com/1031g20biden/]

Also on Saturday, Italian Premier Mario Draghi made a sharp call to pick up the pace in getting vaccines to poor countries as he opened the conference, calling the covid-19 vaccine gap "morally unacceptable."

Draghi, the host of the two-day summit, said only 3% of the people in the world's poorest countries are vaccinated, while 70% in rich countries have had at least one shot.

The tax deal is a key achievement for U.S. Treasury Secretary Janet Yellen, who made an international floor on corporate taxes among the top priorities of her tenure and who pushed for swift action on a deal.

The plan was already endorsed by the finance ministers of each country, but its official approval by the heads of state puts added pressure on the difficult task of turning what remains an aspirational agreement into distinct legislation.

Nearly 140 countries representing more than 90% of total global economic output have endorsed the deal, but they each must implement the new standards in a process that could take some time.

Meeting Saturday morning in Rome, each of the G-20 leaders expressed support for the global minimum tax, and Biden emphasized his support for the "historic" measure, according to a senior administration official who spoke on the condition of anonymity to reveal the discussion. Some of the world leaders participated virtually.

"Today, every G-20 head of state endorsed a historic agreement on new international tax rules, including a global minimum tax that will end the damaging race to the bottom on corporate taxation," Yellen said in a statement Saturday. "It's a critical moment for the U.S. and global economy."

The minimum tax will be coupled with a broader change to global taxation intended to prevent countries and companies from undercutting the new floor. Under the pact, corporations trying to evade taxation by shifting profits to low-tax countries will face a "top-up" tax, which would require them to pay the difference between the tax haven's tax rate and the 15% minimum tax rate of the companies where they are headquartered.

The United States already has a version of a global minimum tax, created as part of the 2017 GOP tax act, that imposes a 10.5% minimum tax on U.S. multinational firms' foreign earnings.

The Biden administration initially proposed raising that amount to 21% as a demonstration of America's commitment to higher corporate taxes, but after negotiations with congressional Democrats, has instead proposed a 15% rate in line with the global agreement. This 15% tax on U.S. multinationals' foreign profits is separate from the 15% minimum tax that Biden is also seeking to impose on large firms in the United States.

The deal includes not just these changes but a separate overhaul of how multinationals are taxed when earning profits in countries where they have no physical presence. That related but distinct tax deal is intended primarily to address anger in Europe over the U.S.-based tech giants that pay little in taxes in European countries despite earning substantial sums there. Several European leaders have said they see the measures as tied together.

Republicans have slammed both parts of the plan as fanciful thinking by an administration sacrificing part of the U.S. tax base to European rivals largely to secure a symbolic victory. Skeptics also note that key details in the plan, particularly pertaining to the part of the tax agreement related to taxing multinational tech firms, remain unresolved and that leaders could confront disagreements when bringing the plan to fruition.

Other critics contend that the plan could in fact punish some of the poorest countries, by shifting the base of taxation from where production occurs to corporate headquarters more often located in rich nations. Nigeria and other African countries, along with Pakistan and a handful of others, have balked at the agreement.

"The production occurs in the developing world," said Joseph Stiglitz, an economist at Columbia University. "The fact they decided to give the tax to the advanced countries just shows the lack of empathy for the developing countries."

Still, Yellen has been adamant that something has to be done to prevent corporations from playing countries off one another to push corporate tax rates lower and lower. The average corporate tax rate globally has fallen from about 40% in 1980 to roughly 23% in 2020, according to the Tax Foundation.

The new minimum tax rate applies only to firms with more than $850 million in annual revenue and is expected to raise roughly $150 billion in additional global tax revenue every year, according to the Organization for Economic Co-operation and Development, which brokered the agreement.

From the opening moments of the G-20 summit Saturday, the leaders of the world's largest economies sought to send a strong message about ending the coronavirus pandemic. During an unconventional group photograph, they were joined on the dais by doctors in white coats and first responders from the Italian Red Cross.

In his remarks opening the meeting -- the first gathering in person for the group since the pandemic struck -- Draghi pointed to the stark disparity in access to vaccines between richer and poorer countries.

"Going it alone is simply not an option," said Draghi. "Now, the world can "finally look at the future with great -- or with some -- optimism."

But as the leaders gathered to discuss plans to protect against future pandemics, health experts and activists expressed concerns that the world's richest nations were still not doing enough to help people in poor nations survive the current one.

Advisers said Biden, who has promised to make the United States an "arsenal of vaccines," would not announce concrete plans related to closing the gap between rich and poor nations on vaccination rates. A senior administration official said Biden had met with some leaders early in the day and pushed them to support debt relief and allow more emergency financing to reach poor countries whose economies have been battered by the pandemic.

While wealthy nations are offering people third vaccine doses and increasingly inoculating children, poor countries have administered an estimated 4 doses per 100 people, according to the World Health Organization.

Only about 300 million of those doses are expected to be shipped this year, a number that experts say falls short of the amount needed for meaningful protection against the virus.

But Biden's advisers said he went into the summit focused on a host of problems, including fixing global supply chains, urging investments to curb climate change and meeting with the leaders of France, Britain and Germany to discuss ways to return to a 2015 nuclear accord with Iran that the Trump administration scuttled.

Before that meeting, Biden suggested to reporters that talks to restart the accord were "scheduled to resume." But in a hastily released joint statement, the group seemed to put the brakes on Biden's assertion.

The statement said the leaders "welcome President Biden's clearly demonstrated commitment to return the U.S. to full compliance" with the accord and "stay in full compliance, so long as Iran does."

Saturday's endorsement of the landmark global agreement seeking to block large corporations from shifting profits and jobs across borders to avoid taxes was a win for Biden, whose administration pushed hard to carry the deal over the finish line.

The leaders were set to formally back the accord in a communique to be released today, an administration official said.

Still, health experts and advocates, including Pope Francis, have urged Biden during his trip to stay focused on closing the vaccine gap for poor nations.

Jake Sullivan, Biden's national security adviser, told reporters on Air Force One en route to Rome that "the main thrust of the effort on covid-19 is not actually traveling through the G-20." He said a virtual summit that Biden convened in September had set "more ambitious targets" for countries to pledge to share doses of the vaccine.

Sullivan said the focus of the G-20 was on the future.

U.S. Secretary of State Antony Blinken is to host a meeting of dozens of countries and nongovernmental organizations this year to secure commitments on vaccine sharing.

"You really have a failure of developed countries' leadership post-covid," said Celia Belin, a visiting foreign policy fellow in the Center on the United States and Europe at the Brookings Institution. "This is going to have consequences."

"There will be many of us," said Gino Orsini, a representative for the Si Cobas union, one of the organizers of a demonstration planned for Saturday to coincide with the gathering. The group is protesting what it says is the exploitation of workers by the international elite.

This year marks the 20th anniversary of the Group of 8 summit that Italy hosted in the northern city of Genoa that was marred by rioting. It is also a moment of tension between authorities and opponents of the Italian government's coronavirus vaccination requirements, which have resulted in violent clashes.

"The level of attention is maximum," said Giovanni Borrelli, an Italian government official, adding that 5,500 extra law enforcement officers were being deployed this weekend.

Information for this article was contributed by Jeff Stein and Seung Min Kim of The Washington Post; and by Katie Rogers, Jim Tankersley and Jason Horowitz of The New York Times.