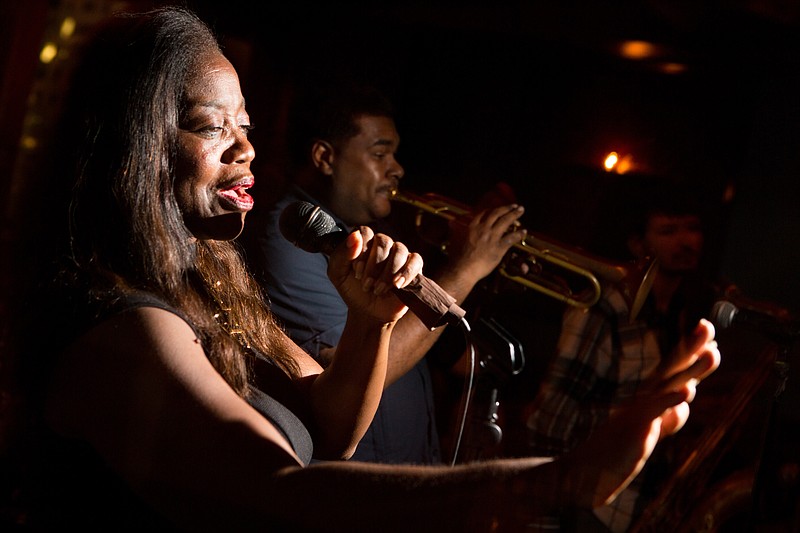 After more than a year offstage, jazz saxophonist Dave McMurray was itching to get back on the road and in front of live audiences. Over the summer, as jazz clubs slowly started reopening and audiences tentatively took their seats, he began touring in support of an album he recorded mostly during the pandemic — a collection of jazz renditions of Grateful Dead songs.

McMurray is a successful musician in his 60s, but back in the mid-1970s, he was a 14-year-old living in Detroit who was hungry for the chance to hear and play the jazz music he heard on records and television. He'd help set up the chairs at Baker's Keyboard Lounge, which opened in 1934, and then stick around for the show.

"I would be staring at the musicians onstage so much I probably made them uncomfortable," he said.

One night, saxophone great Pharoah Sanders was performing. McMurray asked if he could play. Sanders didn't respond, but mid-show, nodded at McMurray to join in.

"If you had the guts to play, you got two choruses," McMurray said. "You get up there and you do your thing and that was invaluable to learning how to play."

While many other historic jazz clubs have closed, Baker's Keyboard Lounge has survived, thanks in part to its legacy. It claims to be the oldest jazz club in the world and received a $40,000 historic preservation grant in May. But most of the other spots McMurray frequented as a kid and an up-and-coming musician have long since shut down, in Detroit and across the country. Many top venues such as Tonic and Lenox Lounge in New York and Cecil's Jazz Club in New Jersey are no more.

The closures are part of a decades-long trend exacerbated by the pandemic. Although many have triumphantly reopened their doors in recent weeks and months, jazz clubs were the hardest hit of all types of music venues, according to Audrey Fix Schaefer, the head of communications at the National Independent Venue Association. The group was created during the pandemic to advocate for venues that were languishing for months without revenue.

"Keep in mind that jazz clubs are probably the most vulnerable to begin with," she said. "They operate on really thin margins. These are houses of art. If you're going to open a blues club or a jazz club, it's because you are devoted to that art form and love it; it's not because you are an entrepreneur looking to make gobs of money."

In December, New York's Jazz Standard closed as the owners cited "the pandemic and months without revenue — as well as a lengthy rent negotiation that has come to a standstill." That same month, the Blue Whale, a 100-seat jazz venue in Los Angeles, shut down after 11 years. New Orleans' Prime Example and Washington's Twins Jazz closed permanently, and in Denver, the jazz clubs El Chapultepec and Live Jack's suffered the same fate.

"It was heartbreaking. It was as if I lost a family member," said Sandra Holman-Watts, the owner of Live Jack's. "There isn't a day that goes by that I don't get an email or text that says, 'We need you back; we need the music.'"

Holman-Watts decided to shut down permanently in May 2020 when it became apparent that a reopening was nowhere in sight. She now runs an entertainment production company under the former venue's name and hopes to reopen a new place eventually.

A handful of jazz clubs that shut down during the pandemic have been sold and reportedly will reopen — among them, California Clipper in Chicago. A new owner plans to reopen El Chapultepec in Denver under a new name, Cantina. At both places, the owners reportedly said they plan to include jazz in the programming.

Jazz lovers in Washington were disappointed when Eighteenth Street Lounge, a 25-year-old spot that hosted jam sessions on Friday and Saturday nights, announced it was shutting its doors. But owner Farid Nouri soon found a new location. The club will keep its name, despite moving to Ninth Street NW.

Uncertainty about the end of the pandemic, high rent and a reduction in traffic in the original neighborhood all motivated his decision to shut down when the lease was expiring.

"The writing was on the wall for me," Nouri said.

Despite the hopes for reopenings, jazz historian Tammy Kernodle, who teaches at Miami University of Ohio, says something is lost when clubs vacate their original spaces.

"You're going to have a whole generation of people who don't have a sense of the actual space and the history that came with it," she said. "We lose the historical grounding of sound. It's unfortunate that we never looked at jazz clubs as historical sites, in the way we will identify a house. We should have that same kind of consciousness so they're saved."

The original Eighteenth Street Lounge, which also helped shape Washington's electronic music scene, featured multiple rooms and an eclectic collection of antique-style couches and decorations. One night, Grammy-winning jazz trumpeter Roy Hargrove showed up to sit in with the band after his show across town at Blues Alley.

"He was playing on the fire escape overlooking Connecticut Avenue, at 1 a.m.," Nouri said. "This was before the days of cameras on your phone. It was a good moment."

"I think the hospitality industry in general has been a gateway for immigrants to establish a life for themselves in American society," Nouri said.

Twins Jazz was on Washington's U Street, which was once known as Black Broadway, the home of Black culture and business in the city. A mural of jazz composer and pianist Duke Ellington looks over the street, but most of the original businesses — such as the jazz club Bohemian Caverns, which opened in 1926 and closed in 2016 — have been replaced.

Ayoubi owned two other businesses on the street, the bar Local 16 and the nightclub Tropicalia. He was forced to close Local 16 during the pandemic, and he has yet to reopen Tropicalia, where he says he owes around $300,000 in rent. He plans to have jazz nights at Tropicalia when it reopens.

"It's absolutely heartbreaking that where we once had Black Broadway, now we have banks," he said. "What happened to the African American-owned places that were promoting jazz and arts? It's horrible. Slowly, slowly, we keep losing everything. We're losing the identity of the city."

Gentrification and rising rents are part of the reason jazz clubs have been struggling to stay open in cities including New York, San Francisco and Washington, according to jazz historian Dale Chapman, who chairs the department of music at Bates College in Maine.

"Many of the most prominent clubs, even the ones that are well established and very famous, have tremendously high overheads," he said.

In addition to their history, jazz clubs also are crucial for the genre's future, serving as training grounds for young musicians who have the opportunity to sit in on jam sessions with their idols. Saxophonist Ron Blake, who plays for the "Saturday Night Live" band, credits the clubs of Evanston, Ill., with his informal education.

"That was your goal as a young person, to go sit in at a jam session," he said. "You better not be (messing around) because every one of your heroes has been on that stage and set it on fire at some point, so you want to do the music and yourself justice."

Despite struggling through the pandemic, many jazz clubs nationwide have reopened or plan to soon. Among them: the Iridium in New York, which will welcome audiences back at the start of November. Others, like New York 55 Bar, are still at risk of closing. The owner launched a fundraiser in mid-September to help keep the venue alive.

While some have received grant money from the Small Business Administration, the funds arrived more than a year into the pandemic and nearly six months after the federal government passed the Shuttered Venue Operators Grant. The program offered music venues up to 45% of their 2019 earnings.

The Iridium managed to survive because it qualified for Paycheck Protection Program loans and has a strong relationship with its landlord, according to Grace Blake, the director of programming at the venue. Amid a nationwide labor shortage that has been especially pronounced in the service industry, the club has found hiring to be a challenge in the lead-up to reopening.

"Someone told us she was crying when she found out we were selling tickets again," said club owner Ron Sturm. "I'm cautiously optimistic, but it's definitely a stressful, anxious time."

Nationwide, music venues also are reporting that more people are buying tickets and not showing up, according to Schaefer. Venues make a small percentage of ticket prices and rely heavily on food and drink sales to turn a profit.

"The no-show rate has been anywhere from double to triple what it was pre-pandemic," Schaefer said. "We hope that that's going to level out back to a normal rate once everyone feels more comfortable about getting out there and more people are vaccinated."

Now that he's resumed performing, Ron Blake said he is trying to be optimistic.

"We've lost a lot, but the music is still alive, and the people that want to promote the music are still here," he said. "We have been improvisers our entire lives; that's what we do. Jazz is going to survive."

"It's not an easy art form to sell," Grace Blake agreed. "It's a small piece of the pie. But it's the building blocks of music. You're not going to get rich off of this, but you will get rich off the experiences."