Leaders set to home in on climate 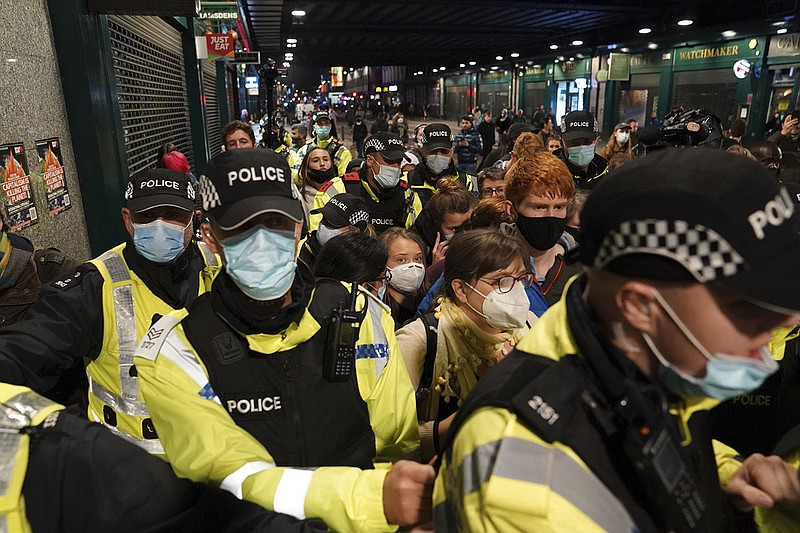 Presidents and prime ministers arriving today in Glasgow, Scotland, for a 12-day climate summit face the daunting task of addressing how the world's 7 billion people will survive on a warming planet that is increasingly producing devastating floods, fires, heat and drought.

Leaders face a widening chasm between the scientific consensus, which says humanity must rapidly reduce the emissions of planet-warming greenhouse gases to avert climate catastrophe, and what political leaders and many corporate executives are willing to do.

[Video not showing up above? Click here to watch » arkansasonline.com/1031glasgow/]

Some poor countries hard hit by climate disasters are holding out for money promised, and yet to be delivered, by industrialized nations. And polluting countries are pressing one another to cut their emissions while at the same time jockeying for advantage and wrestling with the effects on their own economies.

Complicating matters is that the need for collective action to tackle such an urgent, existential global threat comes at a time of rising nationalism. That makes the talks in Glasgow a test of whether global cooperation is even possible to confront a crisis that does not have national borders.

"I don't think you can solve the climate crisis on your own as a nationalist leader," said Rachel Kyte, a former United Nations official and now dean of the Fletcher School at Tufts University. "You depend on the actions of others."

The science is clear, scientists say. Emissions of carbon dioxide, methane and other greenhouse gases driving up global temperatures need to be cut by nearly half by 2030, less than a decade.

The World Meteorological Organization warned recently that the amount of heat-trapping greenhouse gases in the atmosphere reached a record high in 2020, despite the pandemic, and is rising again this year.

With the stakes so high, at least a half-dozen U.S. governors -- all Democrats -- say they want a seat at the table in Scotland and plan to attend parts of the two-week climate change conference.

All six governors are part of the U.S. Climate Alliance, an effort started by Inslee and former Govs. Jerry Brown of California and Andrew Cuomo of New York in 2017 as the Trump administration backed away from U.S. climate goals. The alliance plans to announce "ambitious" new climate commitments in Scotland, though it hasn't shared specifics.

"Governors can do a lot," said Samantha Gross, director of the Energy Security and Climate Initiative at the Brookings Institute. "When they're talking to people on the sidelines and sharing policies and ideas and helping to demonstrate the commitment of the U.S. as a whole, there's quite a bit that they can do."

Even so, U.S. climate envoy, John Kerry, who had recently described the summit as "the last best hope" last week sought to manage expectations. "Glasgow was never, ever going to get every country joining up in Glasgow or this year necessarily," he said Thursday. "It was going to galvanize the raising of ambition on a global basis."

The goals of the summit are to have countries nudge one another to rein in their emissions, commit financial support to low-income countries to deal with the impacts of climate disasters, and iron out some of the rules of the Paris Agreement.

That agreement stipulated that countries come together every five years to update their climate action plans and prod one another to do more. The five-year mark was missed because of the pandemic. The climate summit was postponed.

The pandemic offers a grim lesson on the prospects for collective action. Countries turned inward to protect their own citizens, and sometimes their own pharmaceutical industries, resulting in an inequitable distribution of vaccines. Half of the world's population remains unvaccinated, mainly in countries of the global south.

"We've just experienced the worst part of humanity's response to a global crisis," said Tasneem Essop, executive director of Climate Action Network, an activist group. "And if this is going to be the track record for addressing the global climate crisis, then we are in trouble. I'm hoping this is a moment of reflection and inflection."

Battle lines are shaping up for the Glasgow talks, known as the 26th session of the Conference of Parties, over who is responsible for the warming of the planet, who should do what to keep it from getting worse and how to live with the damage already done.

The venue is itself a climate-change reminder. In the mid-19th century, Glasgow was a center of heavy industry and shipbuilding. Its power and wealth rose as Britain conquered nations across Asia and Africa, extracting their riches and becoming the world's leading industrial power, until the U.S. took the mantle.

"That we are now so perilously close to the edge for a number of countries is perhaps the tragedy of our times," said Mia Mottley, the prime minister of Barbados.

Also, tensions over money are so profound that they threaten to derail any cooperation.

In 2010, rich countries promised to pay $100 billion a year by 2020 to help poor countries address climate change. Some of that money has been paid, but the full amount will not materialize until 2023, according to the latest plan announced by a group of industrialized countries.

At the summit, Edwards of Louisiana, a state that's suffered significant flooding and damage from recent hurricanes, plans to promote his state as a hub for clean energy projects. He has set a goal to cut Louisiana net greenhouse gas emissions to zero by 2050, though his administration is still putting together a strategy for reaching that goal.

"No state in our nation is more affected by climate change than Louisiana, but it's also true that no state is better positioned to be part of the solution to the problems facing our world," he said recently.

The governors at the summit will participate on panels through the U.S. Climate Alliance alongside members of the Biden administration. They also expect to participate alongside 65 subnational governments in announcing "dozens" of new commitments on Nov. 7.

The panel will also focus on politics that can "turbocharge greenhouse gas emissions reductions," according to an alliance news release.

New Mexico's Grisham is heading to the climate conference even as she juggles competing pressures from environmental activists and the fossil fuel industry while running for reelection in 2022.

"We -- as a state, as a nation, as a planet -- must go further by pursuing bold, equitable and just climate solutions. I am looking forward to this significant opportunity for collaboration and action at the global level," Grisham said in a recent statement.

"Governors and mayors around the world do not believe we should rely just on our federal governments," Inslee said during a Thursday news conference.

The Biden administration has pledged that the U.S. will slash emissions by about half by 2030, compared with 2005 levels. But President Joe Biden's ability to reach that target is unclear, as legislation has been watered down and stalled in Congress, partly by one Democratic lawmaker with ties to the fossil fuel industry.

The U.S. has been leaning hard on China to set more ambitious targets in Glasgow. But so far, Beijing has said only that its emissions will continue to grow and decline before 2030.

While Biden will be in Glasgow, China's President Xi Jinping is likely to appear only by video, precluding any face-to-face discussions.

President Jair Bolsonaro of Brazil also plans to stay home. President Vladimir Putin of Russia is not going, either, but may offer remarks remotely. India is unlikely to commit to phase out its heavy reliance on coal power to meet its growing energy needs, although it is quickly expanding solar power in its energy mix.

The most optimistic diplomats say countries will be forced to come around and cooperate.

"Because of the global nature of this threat," the Danish environment minister, Dan Jorgenson, said, "you will see countries, in their own interest, work with countries they see as their competitor."

Success in battling climate change, many say, will be measured by how quickly the global economy can pivot away from fossil fuels. Coal, oil and gas interests, and their political allies, are fighting that transition, but a transformation is visible.

The global use of fossil fuels, which has been on a steady march upward for 150 years, is projected to peak by the middle of this decade, assuming that countries mostly hew to the promises they've made under the Paris accord, according to projections by the International Energy Agency.

Wind and solar power have become the cheapest sources of electricity in some markets, coal use is set to decline sharply by midcentury, despite an uptick this year driven by increased industrial activity in China, and electric vehicles are projected to drive down global oil demand by the 2030s.

Also, global temperature rise has slowed since 2015, when the Paris Agreement was signed.

Some see that as evidence that climate diplomacy is working. Most countries are doing what they signed up to do, which is set their own climate targets and "egg each other on" to do better, said Ani Dasgupta, president of World Resources Institute, a Washington-based research and advocacy group.

"The ratcheting up of ambition, we do see it happening," he said.

Information for this article was contributed by Somini Sengupta of The New York Times; and by Kathleen Ronayne, Morgan Lee, Melinda Deslatte and John O'Connor of The Associated Press.

Print Headline: Leaders set to home in on climate