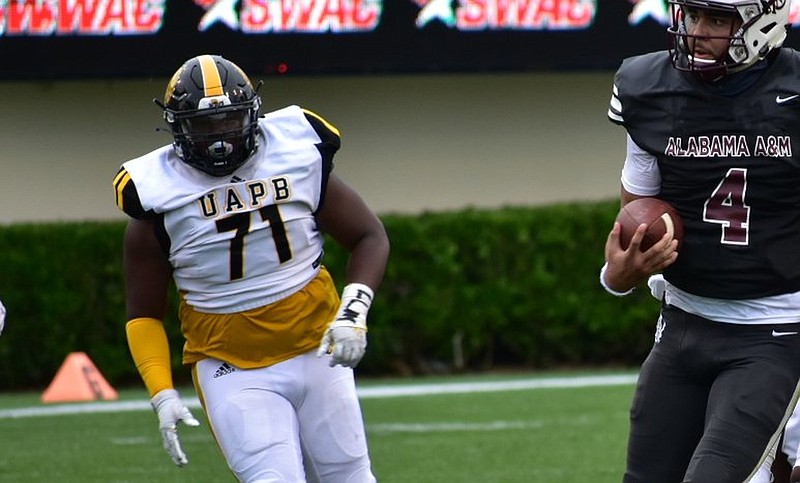 Eight University of Arkansas at Pine Bluff starters returned to the defensive side of the football from the spring, enough to make nose guard Zion Farmer happy.

“With more leadership, you get guys riled up, and you have more experience,” the redshirt junior from Winchester said. “That helps us down the road in the season.” As UAPB nears kickoff to the fall season, Farmer’s goal is to carry the excitement into Simmons Bank Field, where the Golden Lions will host Tennessee’s Lane College at 6 p.m. Saturday.

“Getting the home crowd excited and hopefully a shutout as far as the defense is concerned,” Farmer said, is what he’s looking forward to Saturday.

“That’s us as a defense as a whole. That’s our standard. That’s what we want to do,” Farmer added.

The former Dumas High School Bobcat collected a half-sack in the May 1 spring SWAC championship game against Alabama A&M University and finished the five-game season with seven tackles, including 2.5 for losses. In 2019, Farmer totaled 34 tackles including two tackles for losses but did not record a sack.

Farmer is one of two returning starters on the defensive line, along with junior tackle Jacari McKinney. Others like redshirt freshman Athen Smith and senior Jamari Watson have been competing to fill starting roles at the ends.

“Practice is just a very methodical practice,” Farmer said. “Camp has been great. Really, it’s just getting us ready for the fourth of September. Everything has been strictly business.” The line is hoping to make a name for itself on a unit that boasts two full-time All-Southwestern Athletic Conference linebackers, senior Kolby Watts and junior Isaac Peppers, and an All-SWAC hybrid linebacker-defensive back in Jalon Thigpen.

“It’s been a lot of guys flying around,” defensive coordinator Jonathan Bradley said. “Linebackers have been doing their thing, and multiple guys have been performing. They can come out and play any given Sunday. That might be the group that’s had a real good camp.” Four of the five secondary starters have returned from the spring, including seniors Solomon Brooks, Paul Reeves and Thigpen, and redshirt sophomore Keyvien Johnson.

“Just one of those deals we’re trying to get back flying around, dusting ourselves off, and executing to the highest level and get ball to the ground,” Bradley said. “We’re just making sure we got our rules down, just trying to play solid football. Coach [Doc Gamble] showed us everything this fall camp, and we’re just trying to execute sound football to give ourselves a chance.”

Golden Lion Stadium does not have a seating capacity limitation this season. The stadium holds up to 16,000 fans.

UAPB announced its clear-bag policy for entrance to Saturday’s game. Regular-size bags must be clear or clear branded with the branding no greater than 4.5-inches-by-3.4 inches, and no bigger than 12 inches tall, 12 inches long and 6 inches wide.