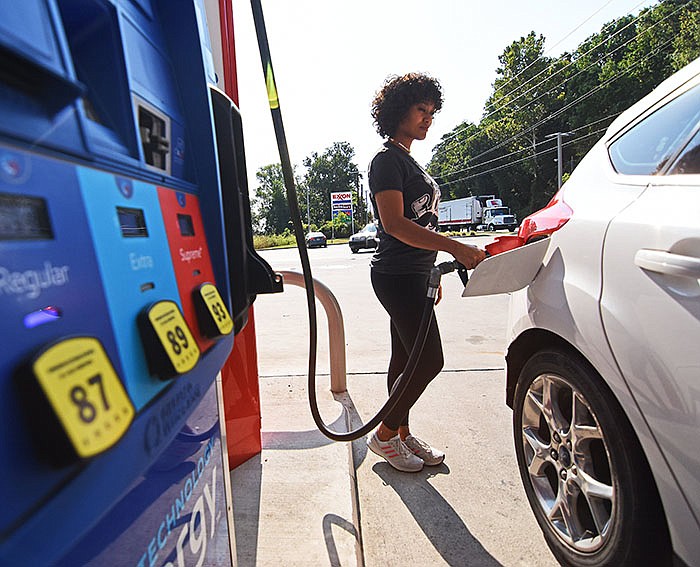 Zoe Keith of Little Rock fills up her car Wednesday morning at the DoubleBee’s Exxon gas station on Cantrell Road in Little Rock. Many people will be taking to the road for the Labor Day holiday this weekend. (Arkansas Democrat-Gazette/Staci Vandagriff)

School has barely begun, and Arkansans are already getting a break.

For many, it's a three-day weekend signifying the end of summer.

It's a time for grilling food in the backyard or taking relatively short road trips.

National gas prices had decreased by 2 cents as of Sunday, reaching their cheapest levels since early July, according to AAA.

But the average price increased a penny on Monday, to $3.15, after Hurricane Ida, which hit the Gulf Coast on Sunday.

By Wednesday, the national average was $3.17.

"The storm has left more than one million people in Louisiana and Mississippi without power and likely taken about 13% of U.S. refining capacity offline," according to a news release from AAA. "There were nine oil refineries in Ida's path. At least four were believed to have shut down operations ahead of the storm."

It's too early at this point to know the full impact Ida will have on the oil and gas industry.

"But motorists regionally can expect price fluctuations leading into Labor Day weekend," said Jeanette McGee, a AAA spokesperson. "Typically, a Category 4 storm could mean three-plus weeks before refineries are back to normal operations, while offshore production is more likely to resume this week."

The average price per gallon of gas in Arkansas was $2.84, according to AAA. That ranked Arkansas as the seventh-cheapest state for gas in the U.S. this week.

Many motorists will be heading for state parks this weekend.

"If current visitation trends continue in Arkansas state parks, we are expecting to have record numbers of visitors compared to 2019 and 2020," said Grady Spann, director of state parks. "We encourage visitors to discover new parks this Labor Day weekend by visiting a park they have not been to before."

Park reservations are running high for the weekend, said Melissa Whitfield, a spokesperson for the Arkansas Department of Parks, Heritage and Tourism.

She said some rooms were still available for the weekend at The Lodge at Mount Magazine and the Jailhouse Bed & Breakfast at Historic Washington State Park.

And Ozark Folk Center in Mountain View has openings at the Cabins at Dry Creek, said Whitfield.

AAA hasn't been forecasting Labor Day travel for the past few years.

Nationally, air travel is expected to increase by 7% to 10% when compared with other weekends at this time of year, said Patricia Mancha, a regional spokesperson for the Transportation Security Administration.

Mancha urged air travelers to leave their guns at home.

"Firearm catches are up all around the country," she said.

"Labor Day isn't normally one of our busiest holidays as passenger traffic declines when school starts back," said Shane Carter, a spokesman for Bill and Hillary Clinton National Airport in Little Rock.

Air travel in Arkansas has increased considerably since last year, before people were vaccinated against covid-19.

"During the pandemic, we've been polling airlines weekly for passenger numbers from the previous week," said Carter. "Last week, we were at 84% of our pre-covid passenger traffic, which was down from 88% earlier in August."

At Northwest Arkansas National Airport in Highfill, enplanements for June (the most recent month available) were 58,050.

The Centers for Disease Control and Prevention is urging people to delay travel -- even domestically -- unless they are fully vaccinated against covid-19.

Even vaccinated travelers should wear masks that cover their mouths and noses on planes, buses, trains and other forms of public transportation, according to the CDC. That includes while indoors at U.S. transportation hubs such as airports and stations.