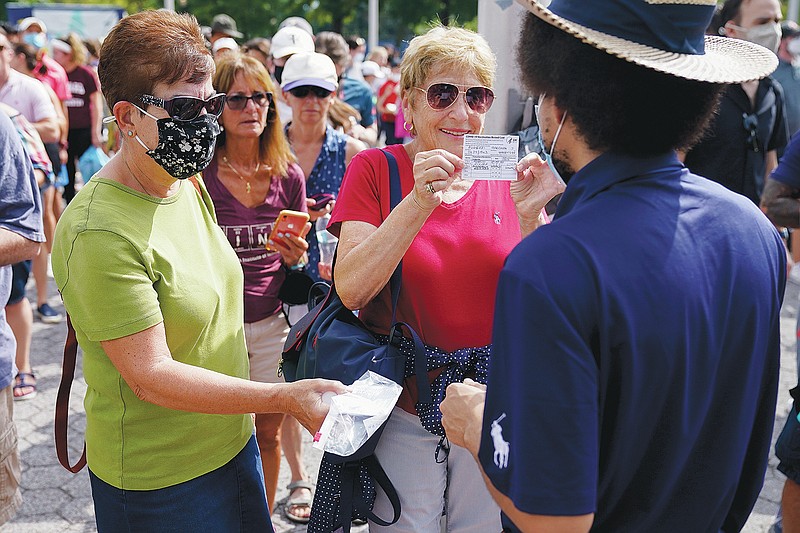 Tennis fans show their proof of vaccination cards for entry to attend the first round of the US Open tennis championships, Monday, Aug. 30, 2021, in New York. (AP Photo/Seth Wenig)

NEW YORK -- Full-throated shouts and hearty applause returned to the U.S. Open tennis tournament Monday, bursts of sound that offered some form of reaction to nearly each and every action. Also back: lengthy lines to get through the gates and to buy something to eat or drink.

A year after spectators were banned entirely from Flushing Meadows because of the coronavirus pandemic, lending a dystopian feel to a normally lively event, 100% capacity is once again being permitted -- proof of vaccination needed; no masks required -- at this and other sports events.

College football resumed Saturday, with tens of thousands on-hand for such as matchups as Illinois vs. Nebraska or Hawaii vs. UCLA. The NFL is letting its teams sell every ticket for the regular season; its first Sunday is Sept. 12.

Makes it tough to tell there's been a recent surge in covid-19 cases thanks to the highly contagious delta variant. Ready or not, our fun and games are moving forward, with full stadiums and, in some cases, few protocols.

As for Monday's varying degrees of noise, including what she termed "calling out at random times"?

"We missed all of that," Stephens said.

Having an audience there makes it all mean more -- to those competing and to those watching, who are more than just part of the scenery.

They're a character in the show.

"After all, that's what we're here for. We try to put on the best performance possible for them," said Lloyd Harris, a South African. "For me, the more people I play in front of, the bigger the audience, the better tennis I play."

People in the seats add to the to the soundtrack, as Stephens noted, but also to the pageantry, to the swirl of emotions for everyone involved, providing a human element at a time when that is disappearing in many ways. Just one example: This U.S. Open is the first without a single line judge on any court, just chair umpires assisted by an electronic line-calling system.

Elsewhere, though, folks were everywhere.

They ordered the Honey Deuce, touted as the U.S. Open's signature cocktail, served for $20 in a souvenir glass.

"The event changed 100%. It's a totally different feeling," Schwartzman said, adding that it "also feels a little bit weird" to be at the first Grand Slam tournament in more than 18 months with full capacity.

Every so often, a burst of sound could be heard from one of the 16 courts hosting action.

As Americans go to Broadway shows, movie theaters and music concerts, covid-19 deaths have been high nationwide. That's why there was a hint of worry on the part of Juan Manuel Gomez, a fan from Guadalajara, Mexico, who watched French Open runner-up Stefanos Tsitsipas practice Monday.

"We know there was risk, but we think it was worth taking," said Gomez, whose wife, Lety, shot video of Tsitsipas with her phone.

Compared to visiting Times Square during their vacation with their two sons, ages 9 and 13, she said, "We feel safe here," knowing spectators needed to show proof of vaccination to get in.

According to guidelines from the Centers for Disease Control and Prevention, fully vaccinated people don't need to wear a mask in outdoor settings, even among crowds -- unless they can't avoid close contact with unvaccinated people. (The vaccination requirement doesn't apply to players, about half of whom have gotten shots.)

Pat James, a 65-year-old retiree from Mendham, N.J., who was with her friend and neighbor, Barbara Ruggeri, was thrilled when the U.S. Tennis Association was pushed by the New York mayor's office to add the requirement last week.

"Actually, I didn't have apprehension so much about the covid as I did about some other issues, like terrorism," James said, after posing for a photo with the Unisphere from the 1964 New York World's Fair that sits not far from one of the Billie Jean King National Tennis Center's main entrances. "I had a little trepidation last night. But we're both vaccinated. When we got into a crowd, we wore our masks. I just wish people would get vaccinated, so this would end."

Even if no one knows when "this" really will end, the hustle and bustle of our lives appears to be on its way back.

Certainly for two weeks in Flushing Meadows, anyway. A far cry from 2020.

"You cannot compare the atmosphere. It's much better. You feel the energy. You feel alive on court," said Simona Halep, a two-time Grand Slam champion who autographed hats and tennis balls thrust at her by front-row fans after a victory over Camila Giorgi at the Grandstand. "So, yeah, hopefully we'll stay like that forever now." 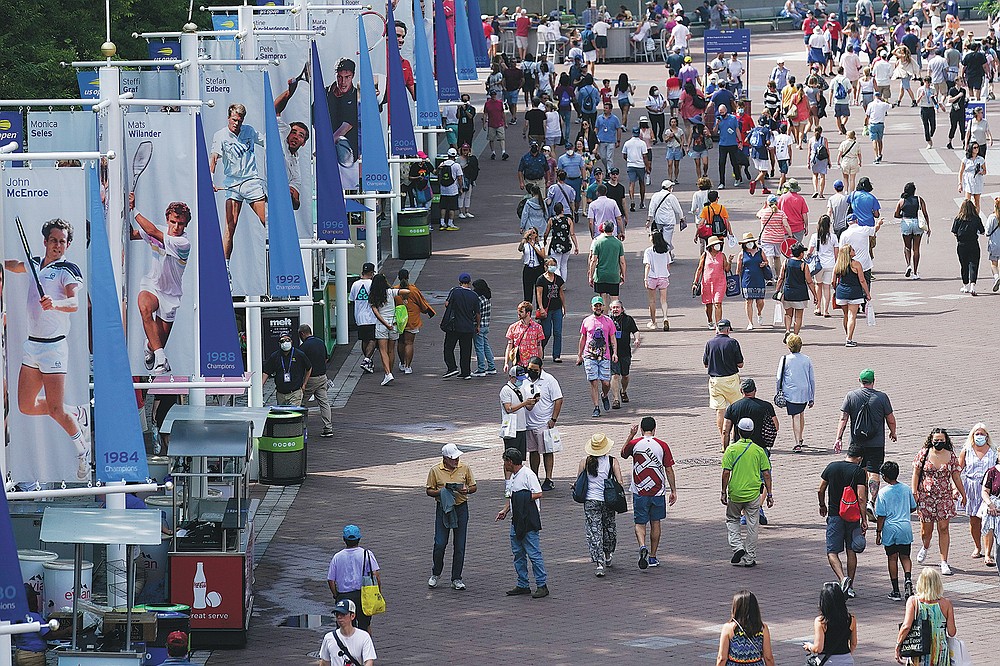 Tennis fans walk the grounds of the Billie Jean King National Tennis Center during the first round of the US Open tennis championships, Monday, Aug. 30, 2021, in New York. (AP Photo/Seth Wenig) 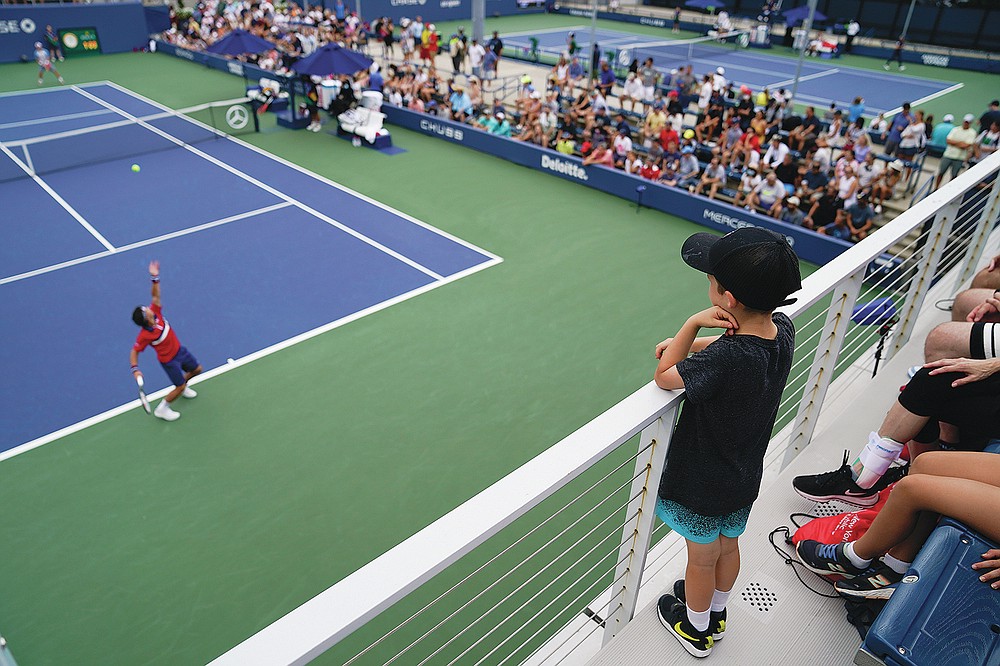 Tennis fans watch as Ricardas Berankis, of Lithuania, serves to Diego Schwartzman, of Argentina, during the first round of the US Open tennis championships, Monday, Aug. 30, 2021, in New York. (AP Photo/John Minchillo) 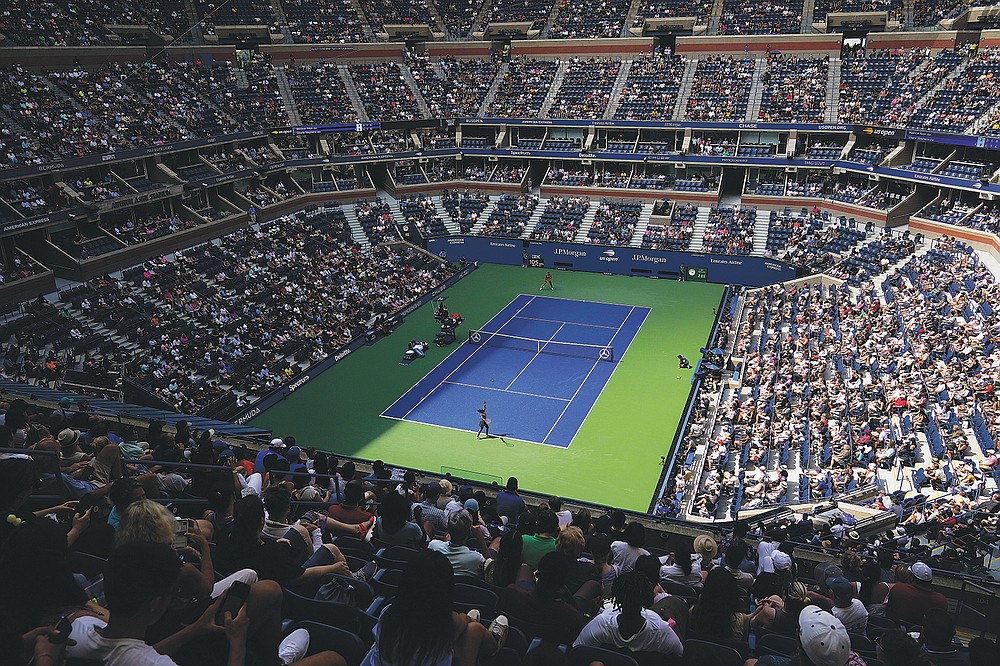 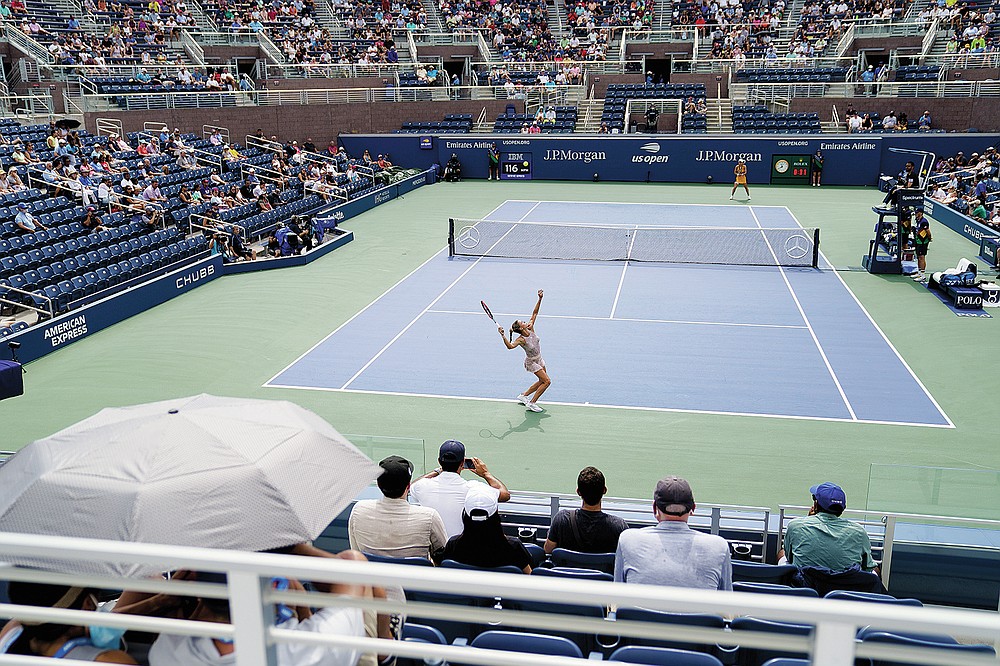 Camila Giorgi, of Italy, serves to Simona Halep, of Romania, during the first round of the US Open tennis championships, Monday, Aug. 30, 2021, in New York. (AP Photo/John Minchillo) 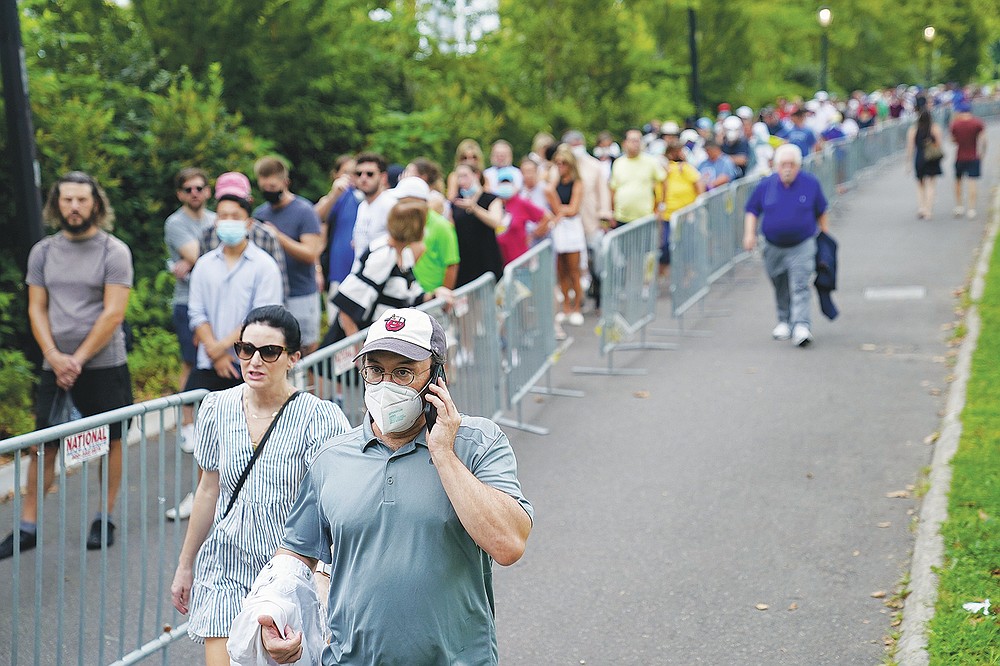 Tennis fans line up outside the Billie Jean King National Tennis Center to attend the first round of the US Open tennis championships, Monday, Aug. 30, 2021, in New York. (AP Photo/John Minchillo)