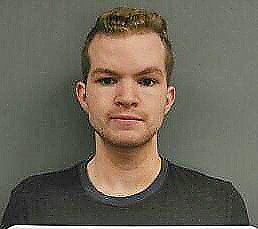 FORT SMITH -- A man has been charged in Sebastian County Circuit Court in connection with a stabbing at a convenience store Tuesday night.

Jacob Riley Favela, 22, of Fort Smith was charged with one count each of attempted first degree murder, armed aggravated robbery, kidnapping and with being a habitual offender, according to a Wednesday news release from Sebastian County Prosecutor Dan Shue. Favela will be arraigned at 8:30 a.m. Sept. 8.

A post on the Fort Smith Police Department's Facebook page Tuesday stated Favela had been arrested on suspicion of first-degree battery and on a parole violation. This was after police responded to a 61-year-old man being stabbed at a convenience store at 3620 N. O St. at 8:45 p.m. Tuesday.

The probable cause affidavit for Favela stated the man, identified as Michael Robinson, had been stabbed repeatedly in the hands and neck Tuesday. He was taken to Mercy Hospital Fort Smith to undergo emergency surgery for his injuries.

Favela was later determined to be responsible for the stabbing, according to the affidavit. After fleeing the scene, he called his mother, who picked him up somewhere close by. The affidavit states Favela told his mother "in excited utterance" he had harmed someone.

Favela both described his desire to "act out a homicidal tendency" and admitted to hurting Robinson during an interview at the Police Department, the affidavit states. He suffered cut injuries on his left fingers from using a knife, which was found under a bed at his mother's house. Favela's clothes from the scene were also found with what appeared to be traces of blood, according to police.

Favela is being held without bail at the Sebastian County jail, an online inmate roster shows.