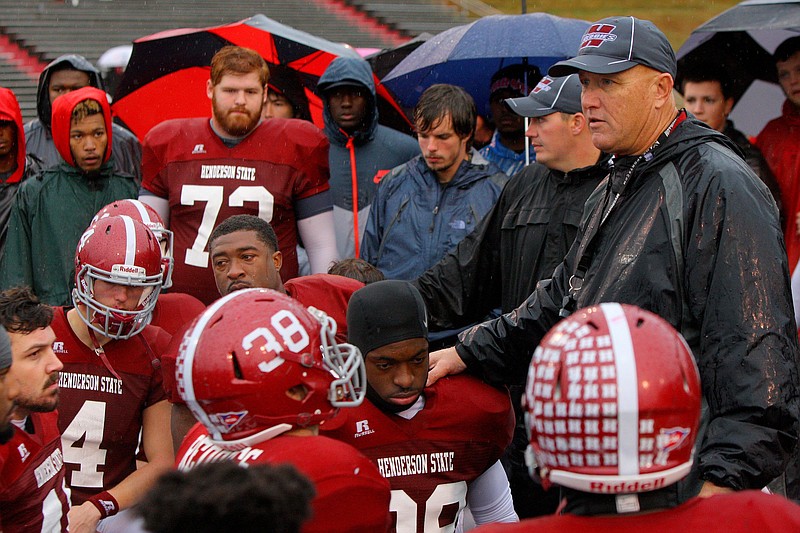 NOTEWORTHY Three-time defending GAC champion Ouachita Baptist is picked to finish first in the preseason GAC coaches poll and is No. 14 in the preseason AFCA Division II poll; Oklahoma Baptist is fourth in the preseason GAC poll. ... Ouachita is breaking in new starters at QB, RB and WR, and may have to rely on a defense led by DBs Hayden Lassiter and Gregory Junior, LB Austin Guymon and DE Dameyon McDonald. ... Grant Allen, a sophomore from Springdale, is No. 1 on the QB depth chart after seeing action in 7 games in 2019, completing 4 of 6 passes and rushing for 33 yards. Allen scored 54 TDs at Springdale, 44 passing and 10 rushing. ... Junior TJ Cole is the top returning rusher (87-605, 4 TDs). ... WR Allie Freeman and his 95 catches are gone, leaving things to Hayden Waller (22-274, 2 TDs), Keemontrae McKnight (14-113, 1 TD) and Justin Dean (6-111, 1 TD). Connor Flannigan, a 5-9 freshman from Fayetteville, is listed as No. 1 at one of the WR positions. Flannigan will return punts and kicks for the Tigers. ... Oklahoma Baptist led the league in scoring, total offense, passing offense and first downs per game in 2019, and the Bison return all of their key skill players. ... QB Preston Haire led the GAC with 3,041 passing yards and 26 touchdown passes in 2019. ... RB Tyler Stuever's 18 total touchdowns ranked second while receiver Josh Cornell finished second in the GAC with 1,054 receiving yards and 10 touchdowns.

NOTEWORTHY Arkansas Tech was picked to finish eighth by GAC coaches in the preseason poll; SE Oklahoma was picked to finish 11th. ... The Wonder Boys return experience on the offensive line, wide receiver and at running back, but the big news is at quarterback where Jack Lindsey -- a transfer from the University of Arkansas -- is listed as No. 1 on the depth chart ahead of Arkansas-Monticello transfer Caleb Canady. Lindsey's main job at Arkansas was as holder for field goal and extra-point opportunities, but he made one start on Nov. 29, 2019, against Missouri at War Memorial Stadium in Little Rock. Lindsey went 10 of 26 for 75 yards and 2 TDs against Missouri and rushed 4 times for 50 yards. ... Redshirt senior Caleb Batie (145-620 rushing, 5 TDs) is a returning starter at RB, with sophomore Deon Simmons (39-211, 3) also returning. ... Drew Wade (46-623 receiving, 4) is back at one of the WR positions, but is listed behind former Memphis transfer Brennon Lewis (25-200 in 2019). Senior Trey Smith (18-264 receiving) is No. 1 at one of the other WR spots. Third-year freshman Joyrion Chase is the No. 1 man at the third WR position. ... Kicker Jesus Zizumbo (16-21 FGs) was a second-team All-GAC selection in 2019. ... "We've gotten better at every position," Shipp said. "It's the deepest D-line we've had since we've been here."

NOTEWORTHY SAU was picked to finish fifth by GAC coaches in the preseason poll; NW Oklahoma St. was picked to finish ninth. ... Senior QB Hayden Mallory (186-298 passing, 2,473 yards, 20 TDs, 8 INTs) is back to lead the Muleriders for first-year coach McCarty, who came aboard as offensive coordinator in the summer of 2020. McCarty was named interim head coach when Bill Keopple retired in October 2020, and was named head coach Nov. 12. McCarty, a former assistant at Arkansas State and the University of Central Arkansas, says he has had the opportunity to teach his schemes and express his expectations from the time he was named interim coach during the no-game 2020 season. Eight starters and 28 lettermen return. "We've been able to able to dot a lot Is and cross a lot of Ts, where a lot of other first-year coaches don't get that opportunity," McCarty said. "It's not the standard first-year coach deal. It's definitely different than that." ... Redshirt freshman Jariq Scales and freshman Blake May will split time at tailback, while sophomore Dekendrick Bender, senior Desmond Jones, redshirt junior Micah Small and junior Brock Price serve as Mallory's main targets. ... The offensive line has five players who combined to start 39 games in 2019. ... Senior safety Brock Floyd (24 starts, 130 tackles, 2 FF, 4 fumble recoveries, 5 INTs) was first-team All-GAC in 2019.