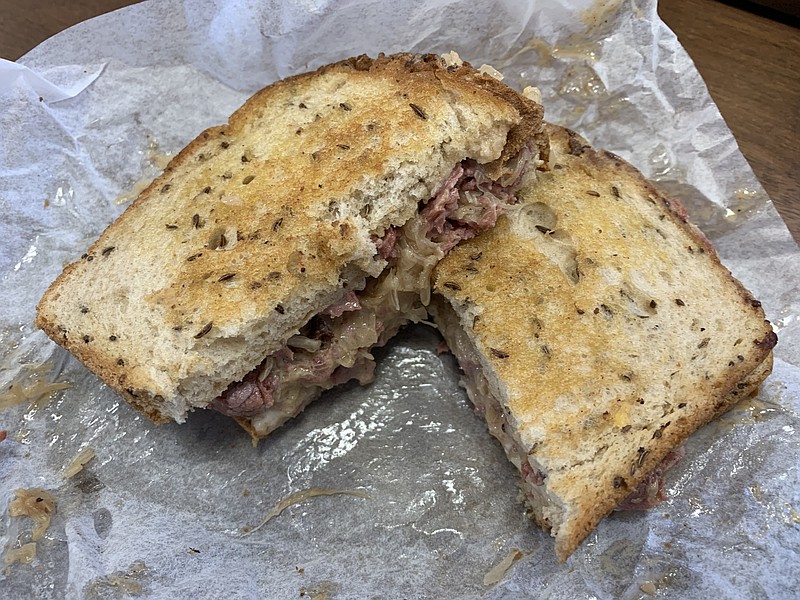 Our Reuben from Slick’s was sloppy but delicious. (Arkansas Democrat-Gazette/Eric E. Harrison)

What to-goes around, comes around. Unfortunately, it's the virus coming around again.

As long as the pandemic rages, we're going to continue to intermingle full restaurant reviews with over-the-counter dining options such as these. By chance and not design, we've evenly split this week's column between close-to-our-office lunch options and some food truck offerings, with generally successful outcomes.

As per our usual practice, we're sticking to locally owned operations — mom and pop, where possible — within a narrow geographical range so we can expect our hot food to still be hot when we get it to our destination. And we pay for our meals up front.

We used to get something from Slick's, which is practically next-door to the paper's downtown offices, at least once a week. It's a mom-and-pop operation that serves sandwiches, plate lunches, burger/shrimp/chicken baskets with fries, full breakfasts and breakfast pastries and various dessert and snack items.

During the 15 months we'd been working from home, we weren't even aware whether Slick's was open, but it was. In fact, owners Guy and Cara Saylors say they only shut down for a few weeks early in the pandemic and have since remained open, even though few people were working downtown and probably even fewer in the state office building in which they're situated.

Our Reuben (we've twitted the Saylorses from time to time that their menu board needs an editor) was about as sloppy as we've had, but it was absolutely delicious: a generous portion of medium-thick, lean corned beef — nicely balanced with just the right amount of sauerkraut and less Thousand Island dressing than it might have sported because Guy asked us how much we wanted and we asked for them to go light on it — on two slices of seeded rye bread.

HOW IT WENT: It took about eight minutes for the kitchen to prepare our sandwich; we'd have gotten out of there sooner if we hadn't had 15 months of catching up with Guy and Cara, including their daughter's marriage and the resulting adorable grandkid.

HOW IT'S GOING: Slick's is as busy as we remember it pre-pandemic.

Wait, didn't we just feature something to go from Cotija's in, like, April 2020? Well, yes, but it has recently moved across Louisiana Street into the former Flint's Just Like Mom's space in the Union Plaza building, and we wanted to see if the quality of the food has changed with the move. (Oh, and of course, it's a few yards closer to our office now than it used to be, so there's a good chance we'll be ordering from here more often.)

We reprised our acquaintance with Cotija's chilaquiles, tortilla strips of various degrees of crunchiness tossed with scrambled egg, peppers and onions. (Other Huevos al Gusto options include Rancheros, Mexicana and al Chorizo.) It turned out spicier than we both remembered and expected, but spice, as well as variety, is the spice of life. Lunch combos come with Mexican rice, which at Cotija's actually has flavor (and some sliced carrot), and the dry (as opposed to soupy) refried beans that are a hallmark of La Hacienda, run by the same Alvarez family of which this is a branch. Plus a generous bag of chips with salsa — on both occasions the chips were just-made fresh; Cotija's offers both a tangy red and a sharper tomatillo-based green salsa in little plastic cups.

We also revisited one of our other Cotija's go-to items, the two-enchilada lunch combo — we opted for the cheese enchiladas, topped and filled with Cotija's thick queso, which has been consistently good over the years. (Chicken, shredded or ground beef and spinach are the other enchilada options.)

HOW IT WENT: We shoehorned in our to-go orders between dine-in customers paying for their lunches; each time, it took almost five minutes for our order to come out of the postage-stamp-size kitchen, which is about as long as it ever took across the street, but seemed longer.

HOW IT'S GOING: At first glance, it would appear that Cotija's has moved into a smaller footprint, but actually, if you count the patio tables, the new place seats close to the same number of customers as the old one. And they reported frequent trouble in their previous location with their air conditioning, which appears to be working just fine in their new home. 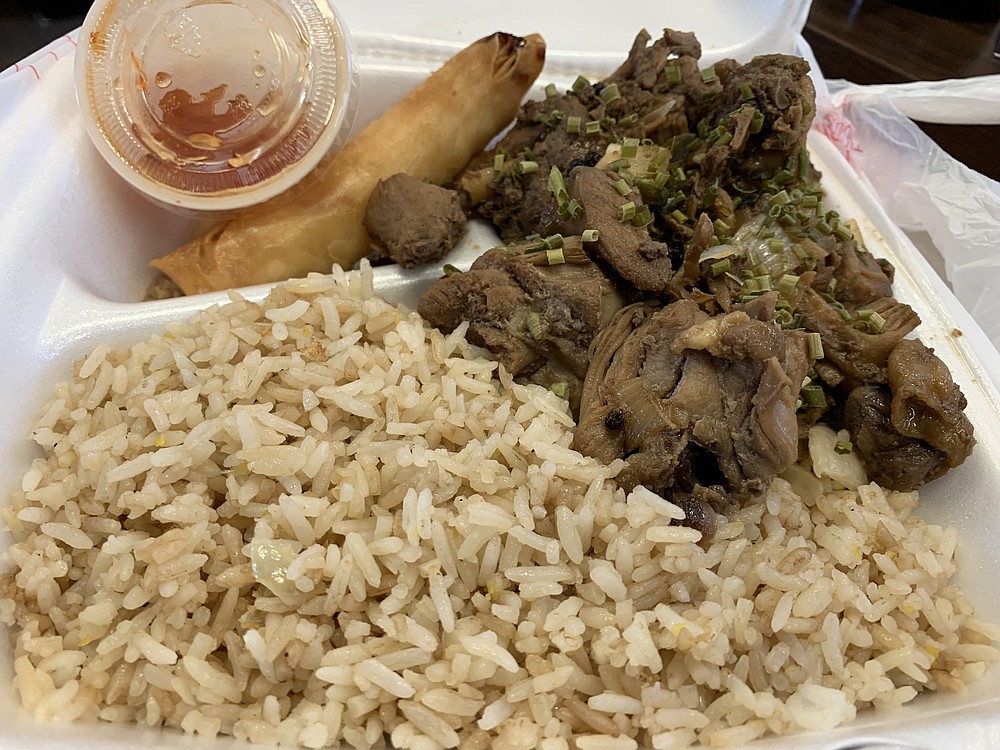 Several Filipino restaurants have come and gone over the years in metro Little Rock, but a few food trucks have had better success. We covered the one called Filipino Munchies almost exactly a year ago; we ran across this one pretty much by happenstance.

Someday we will be adventurous enough to try the Tapsilog (thin sliced marinated beef), the Sisig (chopped seasoned pork, topped with onion and egg — hot or mild), the Dinuguan (pork blood stew) or the Paklay (beef tripe and heart carefully cooked with special spices). But we decided to stick with the "safety" of the Chicken Adobo (the sauce is usually made of garlic, soy sauce, vinegar, bay leaf, ground pepper and sometimes sugar).

We only found out afterward, by scanning the menu on the food truck's Facebook page, that we should have been aware that the "chicken and duck are bone in as originally prepared in the Philippines." Which meant we had to work a lot harder to enjoy the flavorful dark-meat chicken than we had maybe bargained for. (We didn't notice, scanning the menu on the side of the truck, that there was duck adobo option, because it's at the top of the menu in faded script. We'll go with the third option, pork, next time.) 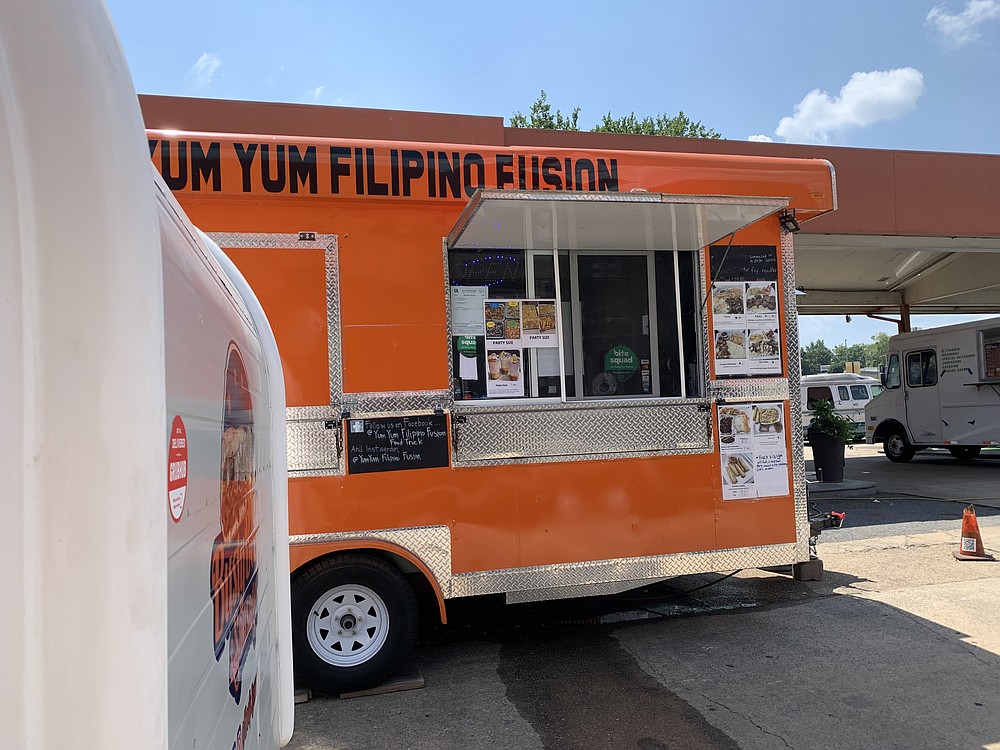 The combo comes with a single lumpia, the Filipino version of the egg roll, and a pile of mild fried rice, plus, in a separate cardboard container, a surprisingly large portion of thin pancit (rice) noodles stir-fried with cabbage and sliced carrots. We saved that for dinner because overall there was just too darn much food, once we factored in the large order of lumpia that we ordered because lumpia is one of our all-time favorite dishes. The five large egg rolls were crisp-fried to near perfection; the chicken filling was a little peculiar in taste and texture (most lumpia we've had are pork-filled), but dunking them into the accompanying sweet chile sauce took care of all issues.

HOW IT WENT: It took about seven minutes to prepare and assemble what turned out to be a huge amount of food.

HOW IT'S GOING: We were the only customers midway through a weekday lunch period. 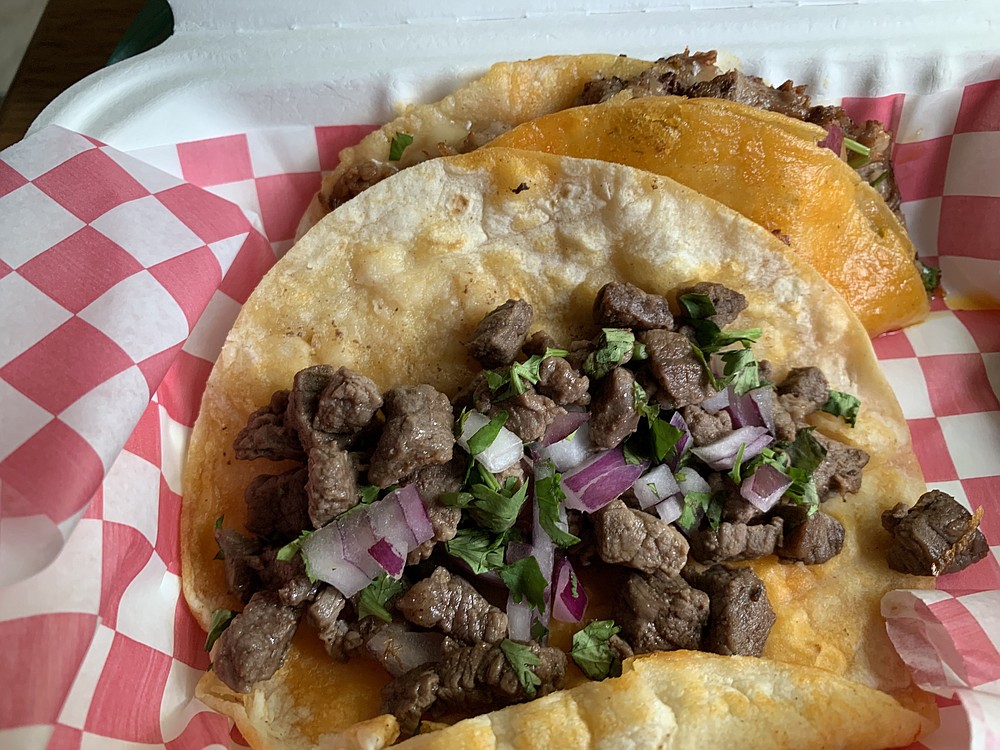 WHAT WE GOT: Carne Asada and Quesabirria tacos ($7), one each

Lili's must come from some pretty swanky streets, since food truck street tacos usually go for something less than $3.50 per, but a glance at the menu — which includes tacos made with chicken, pork and steak but also braised short rib, nopales (cactus) and sauteed mushrooms — indicates fairly "high end."

We let the guy behind the food truck window talk us up from two Carne Asada tacos to one Carne Asada taco and one Quesabirria taco, and we're glad we did. The steak taco, dressed up with some onions and cilantro in a corn tortilla, was ordinary, but the Quesabirria was fun — braised short rib meat with cheese, onion and cilantro inside an oily press-fried corn tortilla shell, and served with a portion of hot, rich consomme, good for dipping while the taco lasts and drinkable, more or less, once it's gone. 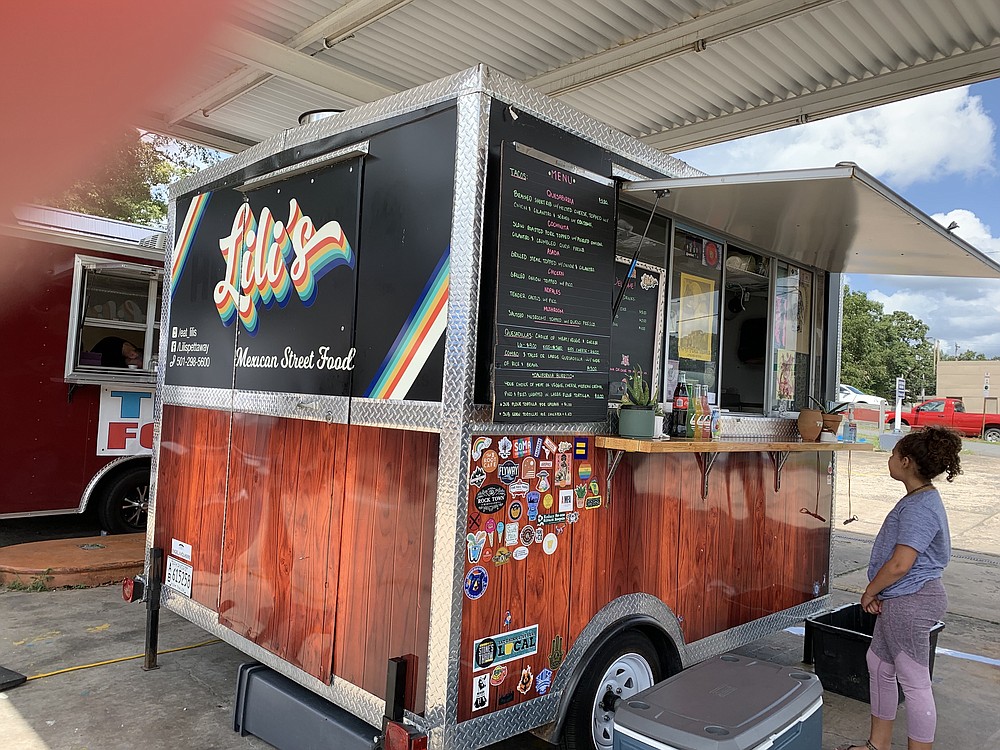 HOW IT WENT: It took about six minutes for our tacos to come out of the "kitchen."

HOW IT'S GOING: There were a couple of other lunch customers on a recent lazy Saturday.