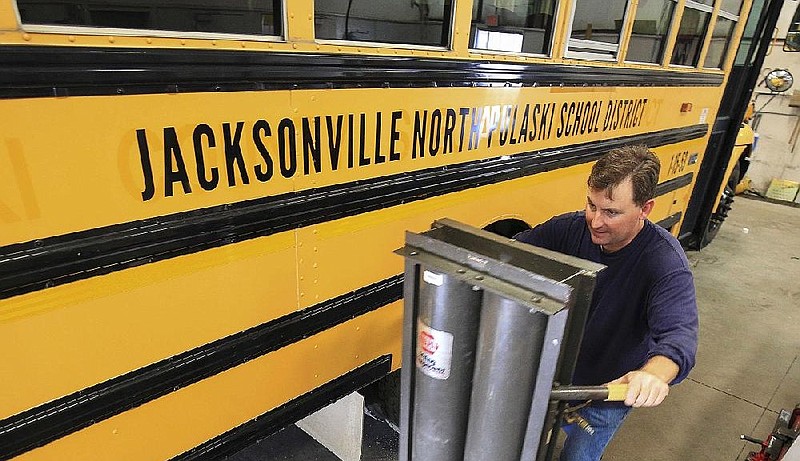 The Jacksonville/North Pulaski School District is asking for federal court help in acquiring state funds for the court-ordered replacement of its Murrell Taylor and Bayou Meto elementary schools.

The effect could be the return of the state representatives as an active party in what is now the 38-year-old federal Pulaski County school desegregation lawsuit.

The Jacksonville district is alleging that the state's stand against funding to the levels desired by the district "has exacerbated one of the remaining vestiges of segregation in this case by refusing to partner with JNPSD to remedy the unequal facilities in the District."

The district is seeking court permission to file what is called "a third-party complaint" against the Arkansas education secretary, who is Johnny Key, and the director of the state Division of Public School Academic Facilities and Transportation, who is Tim Cain.

The purpose of the complaint -- if allowed -- would be to have a judge determine whether state officials must "heed this Court's orders and whether these orders should weigh in the balance of whether desegregation is a prudent and resourceful use of state funds."

Scott P. Richardson, an attorney for the Jacksonville district, sent the request for permission and a copy of the proposed complaint against the state to Chief U.S. District Judge D. Price Marshall Jr.

Marshall is the presiding judge in the federal school desegregation lawsuit in which the Jacksonville district is one of two remaining defendants. Marshall, in 2018, directed the Jacksonville district to replace the two schools as quickly as possible as part of the district's obligation to equalize the condition of all of its campuses. The district already has a year-old high school, a brand new middle school, one new elementary school and another elementary to be opened later this year.

The district responded to Marshall at the time with a plan to pay for the construction that relied in part on anticipated Arkansas Academic Facilities Partnership Program money to pay for as much as 47% of the two projects. Bayou Meto is projected to cost about $14.5 million and Murrell Taylor about $16 million.

State officials approved $4.1 million for replacement of Bayou Meto Elementary, but the state didn't provide for a multipurpose room for a new school because the multipurpose room at the existing campus was built in 2017.

Additionally, the state facilities division declined to provide funding for a new Murrell Taylor Elementary because of the school's relatively young age of 38. The state did say it would share in the cost of an addition to the existing school so that the school meets state standards for size. The state share of that would be under $1.4 million.

"Multiple statutes, rules, and standards of the Arkansas State Board of Education and the Division of Elementary and Secondary Education mandate that school districts comply with federal law, civil rights obligations, and even to be actively pursuing desegregation," Richardson wrote in the request for court intervention.

"Despite this authority [the facilities division] has nullified JNPSD's ability to comply with this Court's order imposing obligations on JNPSD under the Fourteenth Amendment in the desegregation of its facilities," Richardson wrote.

Richardson argues in the proposed complaint that the judge retains jurisdiction over the state in regard to the Jacksonville/North Pulaski district.

"This retention of jurisdiction was a carve-out from the broad dismissal of the State in this matter otherwise effectuated by" a 2014 consent judgement in the case, Richardson wrote.

Richardson further argues in the proposed complaint that state officials are aware of the Jacksonville district's desegregation obligations but did not consider them in making the funding decisions. He further argues that state laws and rules require school districts to work toward attaining unitary status. Unitary status is a court finding that a district has met desegregation requirements and is released from any further court supervision.

"Defendants should be ordered to provide full funding, without penalties, as required under the Partnership Program to replace Bayou Meto Elementary School and Taylor Elementary School on the timeline imposed by this Court," Richardson wrote.

"JNPSD respectfully requests that the Court enjoin the State of Arkansas, Secretary Key, and Director Cain from continuing the constitutional violation this Court has found to exist in JNPSD's facilities and for all other relief to which JNPSD is entitled."

Kimberly Mundell, a spokeswoman for the state education agency, said Wednesday that the agency executives had no comment on the Jacksonville motion.