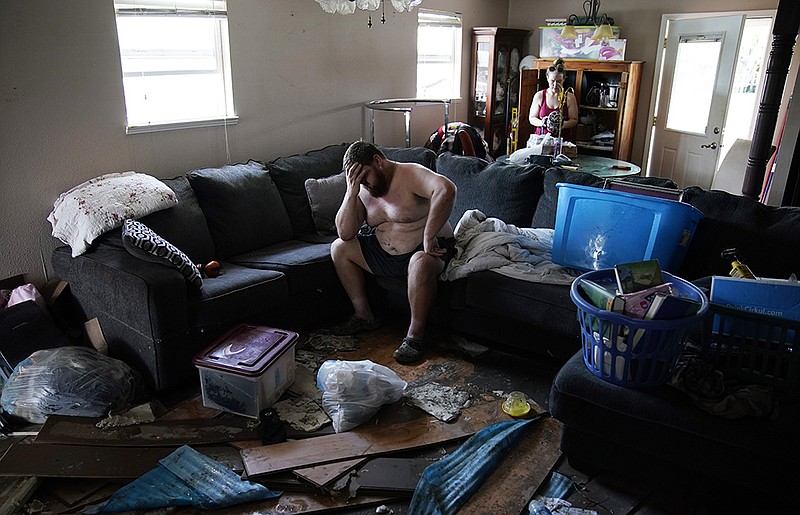 Josh Montford pauses Wednesday in his flood-damaged home in Jean Lafitte, La. “I’m overwhelmed,” he said as he searched for items to salvage. More photos at arkansasonline.com/92ida/. (AP/John Locher)

NEW ORLEANS -- Lights came back on for a fortunate few, some corner stores opened their doors and crews cleared fallen trees and debris from a growing number of roadways Wednesday -- small signs of progress amid the monumental task of repairing the damage inflicted by Hurricane Ida.

Louisiana Gov. John Bel Edwards said he was pleased that power had returned for some people, saying it was "critically important to show progress" after the storm. But he also acknowledged that much more work lay ahead.

"I'm very mindful that it's a start, and only a start," he said at a news conference.

"We do anticipate additional progress, but it will be gradual, incremental," New Orleans Mayor LaToya Cantrell said, noting that power had been restored in some parts of the city. "But seeing the progress, sooner rather than later, is absolutely a step in the right direction."

The death toll rose to at least six after a coroner confirmed a 65-year-old woman had drowned in her Louisiana home and police in Maryland said a 19-year-old man was found dead in an apartment complex flooded by heavy rain from Ida's remnants.

[Video not showing up above? Click here to watch » arkansasonline.com/92powerno/]

The staggering scope of the disaster began to come into focus, with a private firm estimating that total damage from Ida could exceed $50 billion.

Edwards said Louisiana was blessed to have only two deaths from Ida so far given the magnitude of the hurricane's devastation.

In southern Louisiana's Plaquemines Parish, Gayle Lawrence lost two cars, refrigerators and almost everything in her garage to floodwaters. Her garage Wednesday was filled with marsh grass and dead fish. Scores of other homes in the neighborhood were also flooded.

"The house is solid. It didn't even move. But when the water came up, it destroyed everything," she said.

"Today we're a broken community. It won't always be that way," Sheng said after meeting with Edwards.

In New Orleans' Lower Ninth Ward, Elbertha Williams, 64, said she has been confined to her bed in the hallway of her daughter's house for 72 hours. She has been sidelined since a stroke and a fall last year. The family has been without power since Sunday.

[Video not showing up above? Click here to watch » arkansasonline.com/92gaslines/]

"I am 64 years old, and there ain't no way on God's earth that I am supposed to be suffering like this," Williams said as she waved an envelope she has been using as a fan. "I survived the hurricane. That is something you could survive. You can't survive this."

Williams said she has slept little since Ida hit. The windows of her daughter's rental house don't open, and without power neither the air conditioner nor the ceiling fan work.

Hard-hit areas in southeast Louisiana were under a heat advisory Wednesday, with forecasters warning that combined heat and humidity could make some areas feel like 108 degrees Fahrenheit.

With all of New Orleans blacked out except for people running generators, Byron Lambert woke up startled about 1:30 a.m. when a light suddenly came on down the hall from where he slept. He first thought it was a burglar, then realized his home had electricity.

Lambert's house in eastern New Orleans was among more than 11,000 homes and businesses that had power restored early Wednesday, according to the electric company Entergy.

"When it came on it startled me. I'm like 'All right! We got power,'" Lambert said, his enthusiasm tempered by the knowledge of what others were going through. "I'm fortunate, but they have a lot of people that aren't as fortunate as me, and I pray for them because it's rough."

There were still 989,000 homes and businesses without power, or 44% of all state utility customers in southeast Louisiana, from the New Orleans area to Baton Rouge, according to the state Public Service Commission. Phillip May, president and CEO of Entergy Louisiana, told reporters Wednesday that he predicts "a lot more progress" in coming days. Still, he said full recovery will be slow, with thousands of power poles and transformers knocked out by the storm.

[Video not showing up above? Click here to watch » arkansasonline.com/92idaroad/]

In neighboring Mississippi, 32,000 customers had no electricity.

With power restoration still potentially weeks away for hundreds of thousands of Louisianians, the region was seeing gas shortages that left residents hustling for fuel in sweltering conditions.

Tracking service GasBuddy reported that more than half of the service stations in New Orleans and Baton Rouge were out of gasoline Wednesday morning. Others could not operate because they lacked electricity to pump gas.

Residents in those areas are relying on generators to charge cellphones and emergency radios, and to power air conditioning units for relief from the hot and muggy southeastern summer.

The Environmental Protection Agency issued emergency waivers Tuesday for Louisiana and Mississippi for provisions of the Clean Air Act to shore up fuel supply lines. Ida knocked out 94% of the offshore oil and natural gas production in the Gulf of Mexico, according to the U.S. Department of Energy.

Seven oil refineries in Louisiana accounting for 9% of the country's refinery capacity are shut down, according to federal energy officials, and 278 of 560 offshore oil platforms in the Gulf of Mexico remain evacuated.

Colonial Pipeline, which provides fuel to more than half of the East Coast, shuttered portions of its pipeline during the storm as a safety precaution. It restarted operations in those areas Monday.

The moves are not expected to cause a national fuel shortage, the Department of Energy reported Wednesday, because Gulf Coast crude oil stocks are "essentially in line with the five-year average." Fuel providers in the region can also shift production away from foreign exports, if necessary, to shore up domestic markets.

Yet gas prices have ticked up steadily, with the national average rising from $3.13 a gallon Sunday to more than $3.19 by Wednesday, according to GasBuddy.

With the heat index expected to surpass 100 degrees and uncertainty about when power could return, some customers were seen filling multiple gas containers to feed their cars and generators after waiting in long lines.

Near the front of the line was Mickey Hendricks, who said he had been waiting over an hour to top off his pickup's tank and fill up gas cans to keep his generator going at home. "We can last a few days on the generator in this heat, but if we lose that, I don't know what we're going to do," he said.

Ida also wreaked havoc on another essential service -- hundreds of thousands of people found themselves in places where water infrastructure was severely damaged by the storm, and pumps and treatment plants were left without power.

In Jefferson Parish, more populous than the city of New Orleans and right next door, virtually all residents were either experiencing water outages or were under advisories to boil their water. Even as the heat was suffocating and air-conditioning almost nonexistent, drinking water in most of the parish was limited to whatever one had stocked before the storm or could get after waiting in lines for hours.

"This has become basic-level subsistence," said Steve Robinson, the senior pastor of Church of the King, which has a site in Kenner, where a line of cars rolled through as volunteers from his congregation handed out pallets of water and buckets packed with toiletries, flashlights, first-aid kits and nonperishable foods. They eventually ran out of hot meals.

Carbon monoxide poisoning, from the incorrect use of generators, sent a dozen people to hospitals in New Orleans and killed one person, the authorities said, raising the death toll from the storm and its aftermath to at least eight.

There is no firm timeline of when electricity will return to the parish. Without power to drive the pumping stations, tanker trucks have to fill up with sewage and take it to treatment plants, one trip at a time. Nowhere in Jefferson Parish is the water drinkable straight from the tap.

Mark Drewes, who leads the parish's Department of Public Works, said that after the storm roared through, little water pressure remained in the system. Water was spilling out through dozens of broken pipes and mains.

Without water pressure, it was nearly impossible to put out fires, as firefighters discovered when an apartment complex near the New Orleans airport went up in flames Sunday night. With water pouring limply out of hydrants, firefighters resorted to pumping up water pooled at a shopping center across the street and ferrying it to the fire all night long.

Through a time-consuming process of searching for breaks and shutting off valves, the pressure has steadily risen. Still, it was not yet enough, officials said, to render the water drinkable under state health standards. The parish's largest hospital, Ochsner Medical Center, has been relying on its own well, drilled on the campus after Hurricane Katrina, in addition to deliveries of bottled water and potable water from water trucks.

Amid shortages and the heat wave, officials scrambled to offer food, water and places to cool off.

National Guard troops had handed out more than 141,000 meals, 143,000 liters of water and more than 500 tarps in Louisiana as of Wednesday morning, according to Edwards' office. In New Orleans, officials opened seven places where people could get meals and sit in air conditioning. The city was also using 70 transit buses as cooling sites, Cantrell said.

Meanwhile, more than 1,200 people were walking through some of Ida's hardest-hit communities to look for people needing help, according to the Louisiana Fire Marshal's office.

Search and rescue missions were tapering off but continued in four parishes that still had floodwaters, Brig. Gen. Lee W. Hopkins of the Louisiana National Guard said on a Zoom call. That's compared with 31 parishes in the hours immediately after the storm.

President Joe Biden is to visit Louisiana on Friday to survey the damage, the White House said.

In New Orleans, where the mayor estimated roughly half of the population had evacuated, there were additional signs of recovery. Flags hung from dangling power lines to help drivers avoid them, and in one neighborhood, someone decorated the lines with tinsel in an echo of Mardi Gras.

City crews removing debris from roads and cutting up fallen trees had some streets almost cleared, while others remained cluttered.

A few corner stores were open, many taking cash only, though some had working ATM machines. In many areas, National Guard troops or law enforcement officers stood posted at pharmacies and gas stations, where drivers waited in long lines for fuel.

Louisiana's transportation department announced that all interstate systems across the state had reopened and been cleared of debris. AT&T, which faced widespread cellphone outages after Ida, said it was operating at more than 90% of normal capacity.

As a clearer picture of Ida's devastation emerged, the hurricane likely caused $50 billion to $60 billion in total damage, estimated Karen Clark, who has calculated catastrophic risk since 1987. Her risk modeling company, Karen Clark and Company, figured just $18 billion of those losses would be insured.

Those estimates would rank Ida anywhere from the fifth- to seventh-costliest U.S. hurricane based on data from the National Oceanic and Atmospheric Administration. Katrina, Harvey, Maria and Sandy were well over that amount. NOAA says 2017's Irma caused about $55 billion in damage and 1992's Andrew about $53 billion in 2019 dollars. 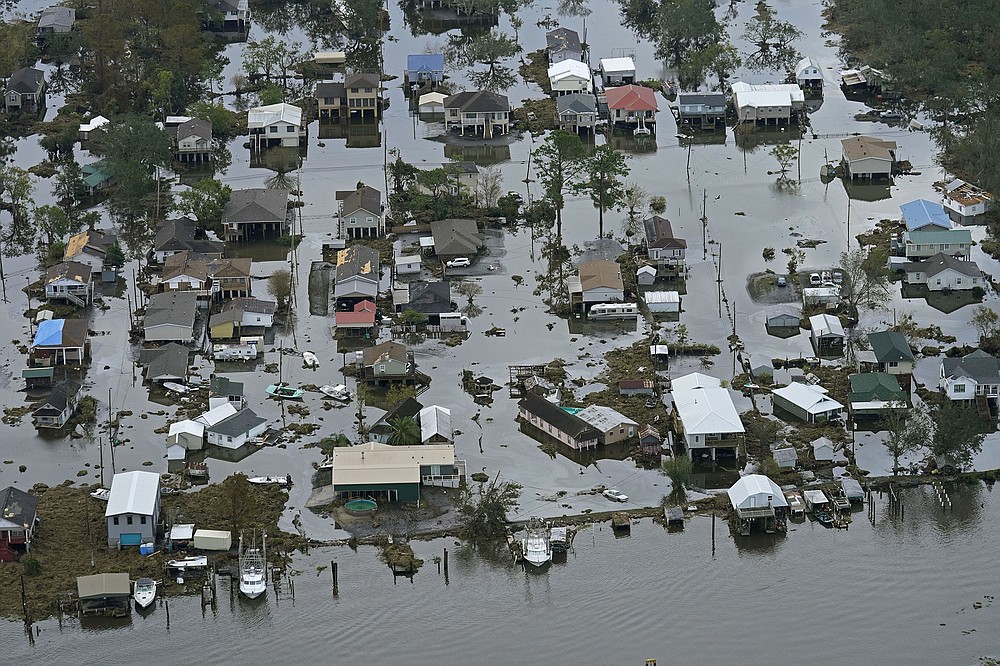 Floodwaters slowly recede Wednesday in Lafitte, La. Officials have been waiting for the water to go down enough for food, water and repair supplies to be trucked into Lafitte and other low-lying areas in hard-hit Jefferson Parish. (AP/Gerald Herbert) 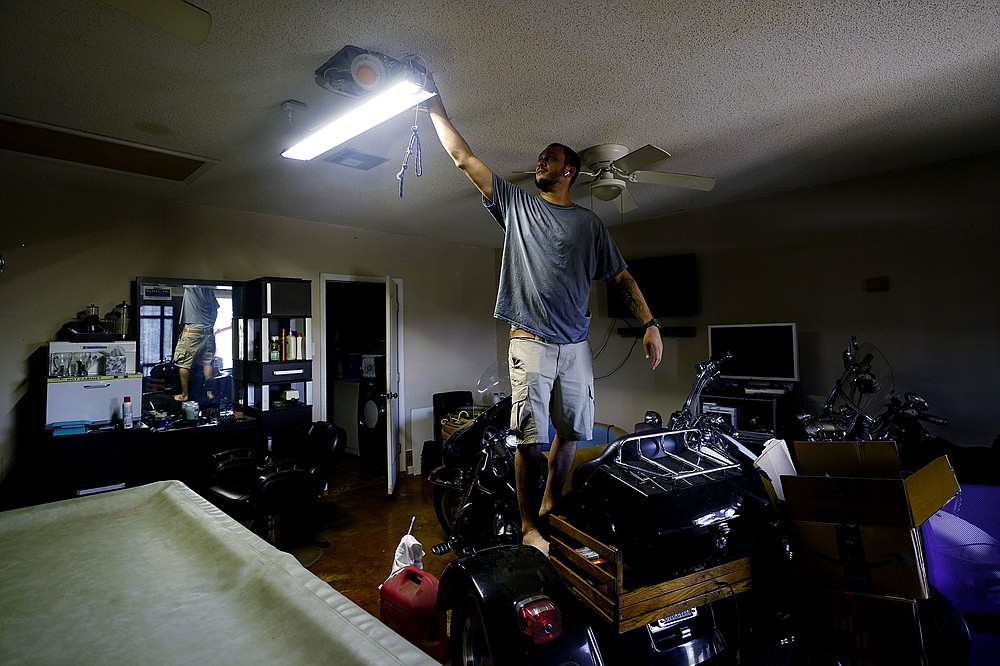 Donnie Pearson adjusts a light at his home Wednesday after power was restored to his neighborhood in New Orleans. Most of New Orleans remains without power, along with much of south Louisiana. (AP/Eric Gay)