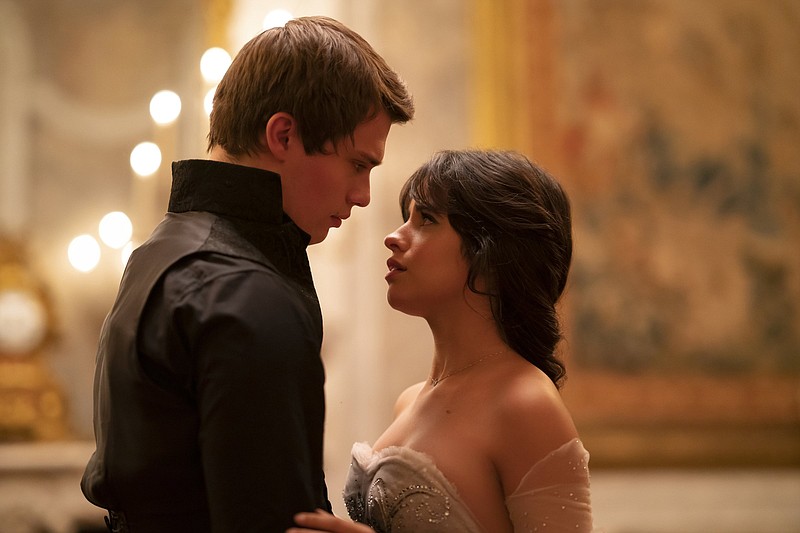 When most people hear the name "Cinderella," their minds probably go to Disney. And it makes sense. The House of Mouse took two cracks at the source material -- animated in 1950 and live action in 2015.

There are plenty of other versions of "Cinderella" dating back to the Greek tale of "Rhodopis," but for most Americans, Disney has the most dominant form of this tale. Now Amazon is taking a swing with a new musical rom-com with the same name. It's an energetic, vibrant and diverse film filled with music that'll stick with its audience for a while after the credits roll.

The film opens right away with a version of Janet Jackson's "Rhythm Nation," and audiences should expect a mix of original and well-known pop/rock songs throughout the film. Most of the time it works flawlessly with tight choreography and beautiful voices. Once in a while a tune will come across as random.

"Cinderella" follows the titular character, played by Camila Cabello. Some things are the same, a cruel stepmother (Idina Menzel), a royal ball, glass slippers, and a prince (Nicholas Galitzine) searching for his love.

And yet, some things are different. Cinderella isn't just looking to get married and become a princess. Rather, she wants to design her own dresses and sell them to others. And the prince isn't all that interested in becoming king.

One of the film's best updates is casting Billy Porter as "Fab G," Cinderella's fairy godparent. With just a few minutes of screen time (and the occasional voice-over), Porter delivers a sassy and magical take on the character. Amazon's production pokes fun at some of the more cliche elements of the fairy tale, and most of the time it's pretty funny. And one of the best scenes is Cinderella asking for something more comfortable than glass heels, and Fab G informing her even magic has its limits.

Menzel's take on Vivian, the evil stepmother, is downright dastardly. Princess Elsa is gone, but her singing talent isn't. When Menzel ruins Cinderella's gown with ink or yanks her around by the ear, audiences should feel a level of rage typically reserved for other despicable villains dsuch as Harry Potter's Dolores Umbridge.

And in modern fashion, the film also tries to add a little backstory explaining why Vivian is so hard on Cinderella. It's unclear if that story addition pays off by the time the final song kicks off. Two things are certain: when Menzel gets a chance to sing, she can belt it out like nobody's business; and when she needs to be cruel, that stepmother can really make audiences flinch.

Disney definitely did better with Cinderella's mice, giving them cute outfits and charming comic relief. The ugly CGI mice in Amazon's new version are the worst part of the film. James Corden may have done all right hosting the "Friends" reunion, but his antics in "Cinderella" are tired and frustrating as he is relegated to jokes about urinating and clapping his hands.

Yet that's a small complaint considering how much "Cinderella" accomplishes. Audiences will likely recall what a bland character Prince Charming was in Disney's animated version of this story. But Prince Robert is actually charming here thanks to Galitzine's performance. Whether he's singing Queen (though he's no Freddie Mercury) or doting on his little sister, this is actually a character that lends a smidgen more credibility to the "fall in love in a day" story.

Cinderella's story does seem to want it both ways, poking fun at the notion of quickly falling in love while actually having the main characters do just that. It's a noticeable "have your cake and eat it too" snafu that's mostly forgivable because of Galitzine and Cabello's chemistry.

As for the titular character, Cabello drives the narrative forward with a women's empowerment theme that manages to avoid the pitfalls Hollywood sometimes falls into when implementing these narratives.

Cabello is pure fire as Cinderella-- or just Ella? The movie likes to go back and forth on her name. But her performance leaves no question Cabello deserves as many roles as Hollywood can offer her. She sings, dances, and acts her heart out and brings so much beauty and life to the character. Songs like "Million to One" and "Am I Wrong?" just serve to highlight Cabello's masterful gifts, and they're tunes that are likely to lodge themselves into craniums and refuse to leave.

Each and every musical performance in "Cinderella" is top notch, from the town crier and his high-powered marching band to a cellist's rendition of Seven Nation Army. There's a sassy chorus that responds to King Rowan (Pierce Brosnan) no matter the mood, and it all comes together to create a unique and modern musical that's worth everyone's time and attention.

The costumes are every bit as vibrant and diverse as the cast filling them, and it only adds to the film's charm. They'll be even more impressive when audiences see cast members dancing in them. The gowns at the ball rival even some of the best dresses offered up in Disney's live-action "Cruella."

When the complete package comes together, a stellar cast, wildly catchy music, and a fresh take on the fairy tale, it's easy to overlook complaints like ugly (and annoying) CGI mice.