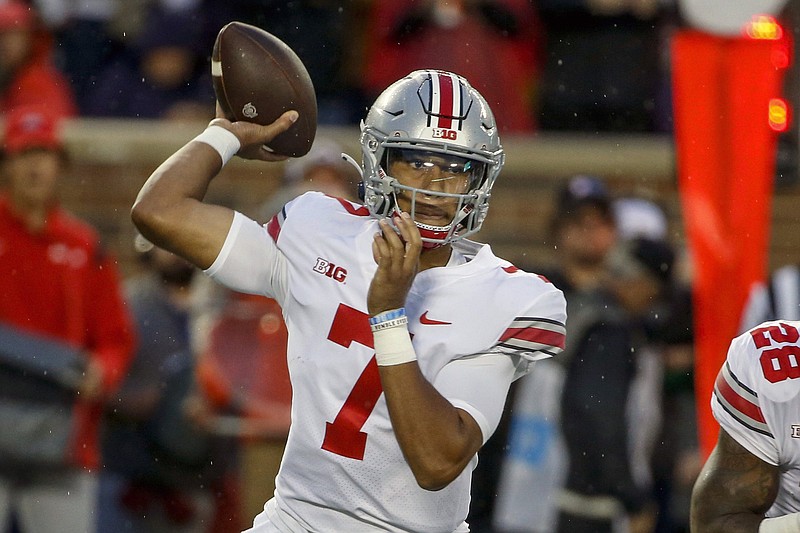 Quarterback C.J. Stroud passed for 294 yards and four touchdowns Thursday to lead No. 4 Ohio State to a 45-31 victory over Minnesota in Minneapolis. (AP/Bruce Kluckhohn)

MINNEAPOLIS -- C.J. Stroud passed for 294 yards and four touchdowns in his debut as the Ohio State starter and the fourth-ranked Buckeyes kept Coach Ryan Day unbeaten in Big Ten play with a 45-31 victory over Minnesota on Thursday night.

The Buckeyes flashed their five-star speed with two 70-plus-yard scores in the opener, one early on a run off right end by Miyan Williams and one late on a third-down screen to true freshman TreVeyon Henderson. Day, starting his third full year on the job, is 24-2 overall and 16-0 in conference games.

Chris Olave had touchdown catches of 38 and 61 yards, and Garrett Wilson scored on a 56-yard reception that gave Ohio State the lead for good at 24-21 midway through the third quarter. Less than three minutes later, Haskell Garrett grabbed a fumble from a strip-sack that Zach Harrison delivered on Tanner Morgan and ran it in for a 32-yard touchdown.

More painful for the Gophers than their fade down the stretch was the loss of star running back Mo Ibrahim, who hurt his lower right leg late in the third quarter, limped off and did not return. The second team preseason Associated Press All-American had 30 carries for 163 yards and two scores, both giving the Gophers the lead.

Ohio State trailed at halftime (14-10) for the first time in a regular season game under Day, who took over for Urban Meyer. The Buckeyes have won 12 consecutive games over the Gophers and 28 of 29.

The Gophers were probably never going to have a better opportunity to topple the mighty Buckeyes than this, fielding one of the most experienced teams in the country at home -- and at night -- to open the season against a newbie quarterback.

With fans allowed back in the seats at what's now called Huntington Bank Stadium, after the virus emptied them out for an abbreviated 2020 schedule, Minnesota enjoyed its third consecutive sellout dating to the Penn State and Wisconsin games in November 2019.

Already a time-of-possession team, the Gophers needed to play keep-away more than ever to make this a game. They were tentative at times but bold at others, including a fourth-and-1 play from deep in their own territory when Ibrahim ripped off a 56-yard run.

That set up a touchdown throw by Morgan to Texas A&M transfer Dylan Wright, who had five catches for 57 yards.

CONWAY, S.C. -- Grayson McCall threw for 262 yards and a touchdown and No. 22 Coastal Carolina scored on its first seven possessions in a victory over The Citadel.

The Chanticleers were among the biggest surprises last season, going 11-1 and winning the Sun Belt Conference's East Division after being picked last in the preseason.

They earned their first preseason ranking this year and made sure they lived up to the billing.

McCall, last year's Sun Belt offensive player of the year, directed an efficient, dynamic offense that scored touchdowns the first four times it had the ball. After a field goal to close the opening half, the Chanticleers scored TDs on its first two series of the third quarter.

McCall completed 16 of 19 passes before coming out early in the third quarter.

Heiligh had six catches for 133 yards.

Dalton Kincaid caught four passes for 75 yards and a pair of touchdowns in the opener for both teams. Tavion Thomas ran for 107 yards and 2 touchdowns on 12 carries in his Utah debut.

Weber State took a 7-3 lead when Rashid Shaheed cut to the edge and returned a kickoff 100 yards untouched. He tied an FCS record with his sixth kickoff return for a touchdown.

Bronson Barron threw for 213 yards and a touchdown for Weber State, but the Wildcats had just 57 yards rushing. The teams retreated to the locker rooms with 8:26 left in the first quarter because of a lightning delay that lasted 90 minutes.

UC Davis took the opening kickoff and went 75 yards in 11 plays with Hunter Rodrigues hitting McCallan Castles for a 12-yard score and a 7-0 lead. The Golden Hurricane answered with a Zack Long 41-yard field goal with 2:05 left in the first quarter and Steven Anderson's 1-yard TD run with 4:45 left in the half to take a 10-7 lead. Gomez kicked his first field goal of the day, a career-long 44-yarder, on the last play of the half to knot the score at 10.

Gomez gave the Aggies a 13-10 lead with a 22-yard field goal with 8:13 left in the third quarter. Tulsa regained the lead on Deneric Prince's 59-yard TD run to take a 17-13 lead into the final quarter. But the UC Davis defense stiffened and Gomez did the rest, kicking a 26-yard field goal with 11:09 remaining and adding the game-winner from 22 yards out with 7:35 left to play.

Rodrigues completed 28 of 35 passes for 311 yards, while Jared Harrell had eight receptions for 136 yards. The Aggies, known for their rushing attack, managed just 88 yards on 46 carries.

RALEIGH, N.C. -- Ricky Person Jr. scored three first-half touchdowns and was one of two North Carolina State players to run for more than 100 yards in the Wolfpack's season-opening win against South Florida.

It marked the Wolfpack's first season-opening shutout victory in 17 years.

Person had a 33-yard TD catch from Devin Leary on a perfectly executed wheel route on the Wolfpack's first drive, then scored a pair of 11-yard runs in the second quarter for a 24-0 halftime lead.

It marked the second consecutive year that Person opened the season with a multi-TD game, and he went on to finish with 105 of his 148 total yards on the ground.

Fellow back Zonovan Knight ran for 163 yards and a 46-yard touchdown, part of a 293-yard rushing day in a dominating performance by N.C. State to start Coach Dave Doeren's ninth season in Raleigh.

Holton Ahlers gave the Pirates the lead on a 63-yard touchdown pass to Keaton Mitchell early in the first quarter. Brice engineered a pair of scoring drives, hitting Thomas Hennigan from 34 yards out to cap a seven-play, 66-yard drive, and moving 78 yards in nine plays, with Camerun Peoples scoring on a 21-yard run.

Chandler Staton kicked two second-quarter field goals, from 21 and 43 yards, to put to put the Mountaineers up 20-6 at halftime.