How Arkansas is assisting in Hurricane Ida relief efforts 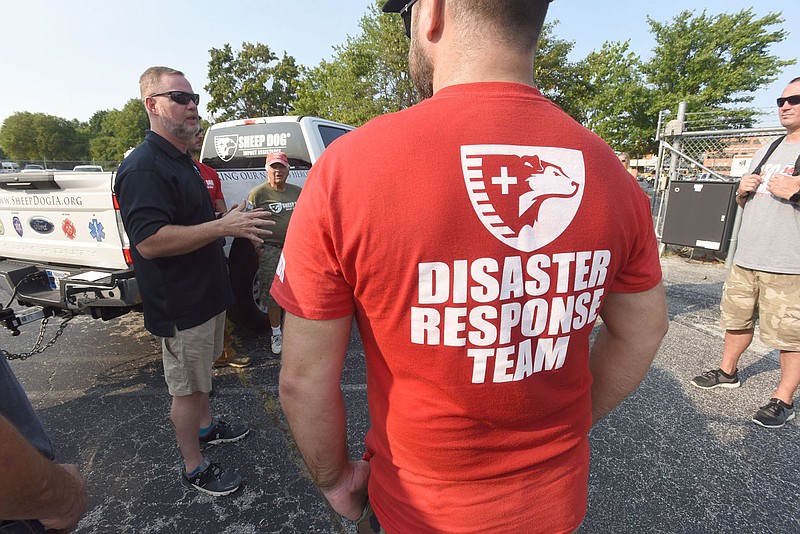 HURRICANE RELIEF Sgt. Maj. Lance Nutt briefs Sheep Dog Impact Assistance members and volunteers on Wednesday Sept. 1 2021 before their deployment to help with hurricane relief in south Louisiana in the wake of Hurricane Ida. Several of the 40 to 50 men and women involved in the deployment left Sheep Dog headquarters in Rogers on Wednesday for travel to Louisiana, said Bridgette (cq) West with Sheep Dog Impact Assistance. They will mostly help put tarps on the roofs of damaged homes and do chain saw work, she said. Local Sheep Dog members and volunteers, plus others from several states, are part of the relief effort. The group should return to Arkansas Sunday or Monday. Another group is set to deploy on Tuesday, West said. Go to nwaonline.com/210902Daily/ to see more photos. (NWA Democrat-Gazette/Flip Putthoff)

This story is a part of The Article, your guide to Arkansas news and culture, presented by the Democrat-Gazette. Sign up for The Article's twice-weekly newsletter here or go here to see stories that have appeared in past newsletters.

Hundreds of Arkansans have gone or will be headed this week to the Gulf Coast to provide relief after Hurricane Ida made landfall Sunday as one of the strongest hurricanes to hit the region ever.

Here’s some of the groups that have assisted in relief efforts so far.

A group of first responders, 24 from Central Arkansas and 21 from Northwest Arkansas, arrived at a convention center near Baton Rouge earlier this week.

The team, called Arkansas Task Force-1, is trained in urban search and rescue and responding to natural disasters.

Little Rock is offering local hotel vouchers to Louisiana and Mississippi residents displaced by the storms. Impacted residents must provide some form of photo identification and verify that they live in impacted areas.

The American Red Cross of Missouri and Arkansas sent four emergency response vehicles to Louisiana on Monday to transport and deliver food and emergency supplies to affected communities. Two volunteers will travel in each vehicle.

Sheep Dog Impact Assistance, a nonprofit headquartered in Rogers, is planning to send two teams of volunteers to the Gulf Coast. The first group left Wednesday, and the second group is set to leave Tuesday.

Entergy Arkansas is sending 520 employees -- line workers, vegetation crews and support personnel -- to the Gulf region to help with the effort underway to restore power to the almost 1 million customers who lost power in the hurricane, communications specialist Brandi Hinkle said.

Arkansas motor coach drivers have also been assisting both before and after the hurricane made landfall.