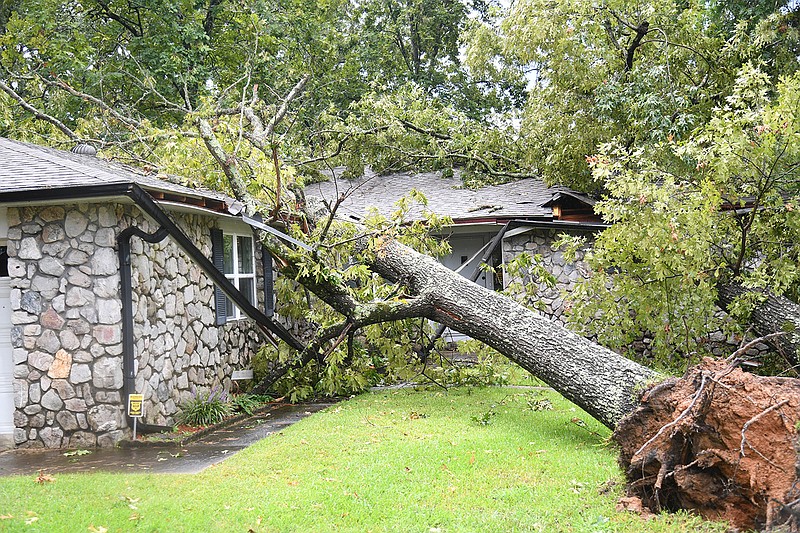 A tree rests on the roof at 106 Bon Air Point in Hot Springs after a storm blew through Wednesday afternoon. (The Sentinel-Record/Tanner Newton)

Cavanaugh said a microburst is a collapse of a thunderstorm. One crashed into downtown Hot Springs in August 2012, damaging numerous businesses and residences and leaving thousands without power.

"When it hits the ground all at once, that's what we call a microburst," he said. "It doesn't sound as scary as a tornado, but it's a lot of force hitting the ground all at once. From everything we can tell, it was a pretty classic signature of a strong microburst. It looked fairly obvious, compared to the radar data, that there was a big collapse of rainfall in the area where the damage occurred."

Damage was reported as far south as the Arkansas 7 south and Massey Road intersection.

"They went door to door to make sure everyone was OK and to document the damage," he said. The county road department was "set up to clear a way into Windy Point, but they couldn't do much until they got Entergy on scene. Obviously, Entergy was focused on Hurricane Ida, and they didn't have many resources that were staged back in this area.

"It took a little bit longer than what it normally would have to get Entergy on scene. Once Entergy arrived and was able to secure those power lines, the road department was able to work with the fire departments and get the roads open."

During the storm response, the sheriff's office and 70 West Fire Department worked a three-vehicle wreck on Airport Road, Robertson said, noting that the storm made for a busy afternoon and evening in the county's 911 Communications Center.

"We got an email from the sheriff's office commending the efforts of our dispatchers during [Wednesday night's] event," Robertson said. "They did an awesome job."

Cavanaugh said the National Weather Service issued an advisory that predicted winds of up to 50 mph, but the damage was consistent with higher speeds.

"We underforecast the winds, because the winds were clearly stronger than 50 miles an hour to produce that type of damage," he said.

The weather service said there was a 20- to 30-degree difference in the temperature and dew point Wednesday, creating dry air below the storm base that may have strengthened the downdraft that hit the ground and radiated out.

"That dry air will evaporate some of the rain, which causes the air to get even colder as it descends," Cavanaugh said. "That evaporative cooling can actually accelerate the rain down to the ground and make the air go down to the ground even faster."

He said a photo of a picnic table undisturbed by Wednesday's storm was indicative of a microburst, not a tornado.

The picnic table "was just sitting there," he said. "Tornado winds tend to originate from the ground and then move up into the atmosphere. They can still knock down trees and do quite a bit of damage, but their damage tends not to be quite as widespread as a microburst on average. The damage tends to be very focused, in a line."

Objects a tornado collects become falling projectiles once the vortex passes. They can fall with enough force to stick in the ground, but Cavanaugh said he didn't see evidence of that in the photos the county provided.

"Once it gets out of the tornado's circulation, it falls down to the ground at the force of the acceleration of gravity," he said. "It tends to javelin projectiles into the ground. We didn't see any of those javelins into the area."