Ouachita hangs on thanks to turnover 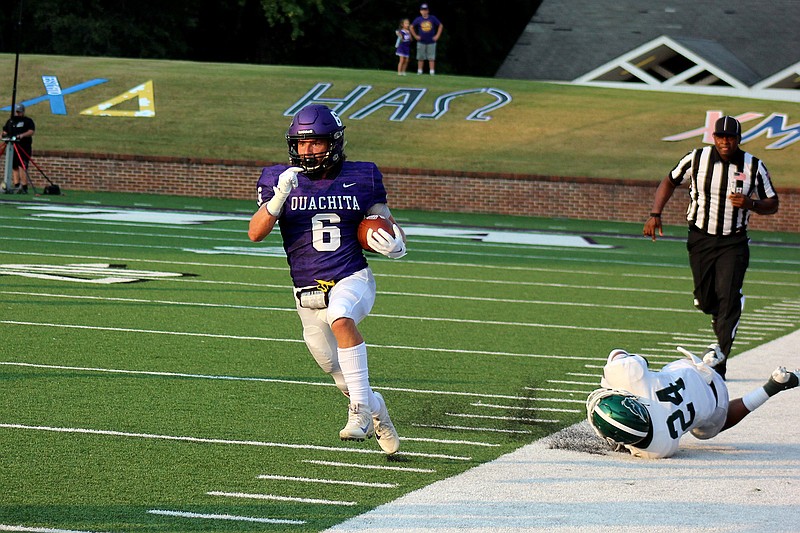 ARKADELPHIA -- It took 81 plays for the Ouachita Baptist defense to create a turnover against Oklahoma Baptist and its prolific quarterback Preston Haire, but the timing could not have been better.

Sophomore defensive back Andrew Hayes made a diving interception at the OBU 9 with 39 seconds left Thursday night at Cliff Harris Stadium, and it was enough to preserve a 38-31 victory over a Bison team that overcame a 14-0 first-quarter deficit to lead 31-24 with 13:19 to play in the Great American Conference's return to action.

Hayes, from Bryant, had OBU's turnover belt draped over his shoulder and a big smile on his face as he stood on the field afterward.

"It was about time," Hayes said. "It felt like I was not having a good game in my eyes. I was having a bad game I was not holding up to my standards. And my teammates were feeding me positivity. Finally, I was able to pay them back the way they paid me back the whole game."

Hayes' interception came on Haire's 52nd pass of the game. Haire completed 36 of his attempts for 345 yards and 3 touchdowns.

"The corner made a heck of a play," Haire said. "We had been making plays all night, and they made plays. They just happened to make the final one."

Hayes said the Bison receiver peeled off thinking that Haire was going to scramble, and the ball went straight to him.

"I was in the right place, played it well, went to the ground," Hayes said.

Haire's other prominent target was senior Josh Cornell (11-134. 1 TD), while leading the Bison to 31 points and 481 yards against an Ouachita defense unaccustomed to giving up those kind of numbers.

"In the past we would have never come back from a 14-0 deficit," Haire said. "Of course we would have liked to have won, but that showed crazy heart by our team."

Ouachita scored the first 14 points and the final 14 points in front of an enthusiastic crowd of 4,682, the first 14 coming in the game's first six minutes.

The game started with Xaylon Falls returning the opening kickoff 93 yards for a touchdown, and after the defense forced a punt, the Tigers drove it down the heart of the Bison defense, going 48 yards in 10 plays.

Freshman running back Kendel Givens (17-74 rushing, 3 TDs) of Little Rock Christian did much of the goal-line work when taking the direct snap, while TJ Cole (21-151, 1 TD), a junior from Texarkana, had the flashier runs, including a 27-yard run out of the Wildcat to tie the game at 31-31 with 5:10 to play.

Givens scored his third touchdown on OBU's final touchdown drive, a 5-yard keeper, when the Tigers went 97 yards in 8 plays, benefiting from two 15-yard penalties on the Bison defense."

"We knew we were in for a fight," OBU Coach Todd Knight said. "I'm just so happy with the way we responded on offense in the second half."

"We started making plays, we started jamming people," Knight said of the defense. "And I've got to give Coach Derby credit. He stuck to his knitting. We ran the football, and we did what we had to do to win the football game."

Knight said Oklahoma Baptist is a team to be reckoned with.

Morse completed 17 of 26 passes for 183 yards. Two of his touchdowns went to junior Chris Hatzis, who scored on receptions of 11 and 13 yards in the first half as the Reddies jumped out to a 14-0 halftime lead.

Southwestern Oklahoma had pulled to within 21-13 early in the fourth quarter and had the ball near midfield when Henderson's Andrew Croker picked off a tipped ball to set the Reddies on their own 39. Four plays later, senior Duce Sproles ran in from the 1 with 10:41 remaining to give the Reddies a 28-13 advantage.

L'Liott Curry led Henderson State in receiving, catching seven passes for 61 yards, including a 10-yard scoring pass with 5:38 left in the third quarter that gave the Reddies a 21-7 lead.

RUSSELLVILLE -- Southeastern Oklahoma quarterback Daulton Hatley completed 15 of 25 passes for 290 yards and 3 touchdowns as the Savage Storm rolled to a victory over the Wonder Boys.

Trailing 7-6 after one quarter, Southeastern Oklahoma scored the next 24 points to take control of the contest.

Senior Jack Lindsey completed 15 of 34 passes for 137 yards for Arkansas Tech. He tossed a 36-yard scoring pass to freshman Adam Cousins with 3:03 left in the first quarter and a 3-yard TD pass to Caleb Batie with 14:55 remaining to cut Southeastern Oklahoma's lead to 30-20. The Savage Storm, however, scored twice in the game's final 6:43 to put the game away.

Cousins led the Wonder Boys in receiving with two receptions for 45 yards. Ron Thompson led Tech in rushing with 59 yards on six carries. Jordan Edington scored on an 8-yard run for Tech.

ALVA, Okla. -- Hayden Mallory threw touchdown passes of 20 and 3 yards to Micah Small as the Muleriders pulled away from the Rangers in the two teams' season opener at Ranger Field.

SAU's Austin Wilkerson kicked field goals of 39 and 28 yards in the first quarter to give the Muleriders a 6-0 lead. Southern Arkansas led 12-3 at the half.

Arkansas-Monticello led 30-7 at the half but had to stop a Southern Nazarene drive at the UAM 42 with 44 seconds left.

Print Headline: Ouachita hangs on thanks to turnover