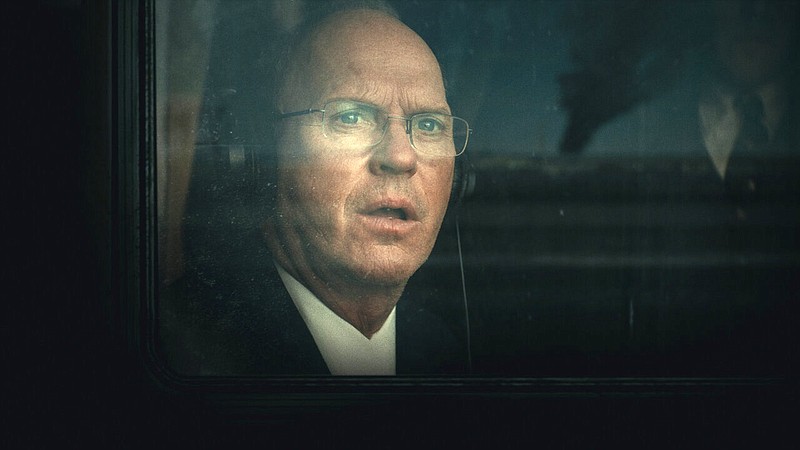 Special Master of the September 11th Victim Compensation Fund Kenneth Feinberg (Michael Keaton) has the thankless task of determining how the families of the people who died in the 9/11 terrorist attacks will be compensated in the Netflix film “Worth.”

As America approaches the 20th anniversary of 9/11, Netflix is offering up a film that deals with some of the aftermath of those horrific events. "Worth" premiered at the Sundance Film Festival in January 2020 right before all hell broke loose with this pandemic.

Doubtless it would have probably come to theaters sometime last year, but now it falls just before the big anniversary.

Directed by Sara Colangelo, "Worth" is a biographical film that focuses on Kenneth Feinberg, a lawyer appointed Special Master of the U.S. government's September 11th Victim Compensation Fund.

Michael Keaton brings a heavy performance (as Feinberg) into a grim story filled with heartbreak and human moments as he and his team of lawyers interview survivors of the 9/11 attacks and try to answer a simple question: How much is a human life worth?

In fact, the film's main opening scene is Keaton asking his class of law students how to put a price tag on life with a hypothetical scenario where a tractor kills a farm worker. This comes after audio and video of 9/11 victims who lost loved ones on that horrific day, each as gruesome and heavy-hitting as the last.

It sets the tone for a somber movie where Keaton just gets harangued for almost two hours by survivors who are raw and hurting. It's nobody's fault, but he did sign up for a job few others wanted.

Keaton brings more of an upper-crust gravitas to "Worth" than he did as The Vulture in "Spider-Man: Homecoming." He spends hours listening to opera on CD, works through family dinners, and tries to remain a detached attorney who wants to keep 9/11 victims as simple numbers on a spreadsheet.

Amy Ryan backs him up as Camille Biros, his partner on the law team helping to deal with clients all trying to determine if they want to sign up for the fund or try to file their own lawsuits, all still in mourning.

Feinberg and Biros tell their subordinates early on what the gig is about. They're not here to solve these people's problems or make them feel better. Their job is to convince as many survivors as they can to sign up for the government fund instead of filing endless lawsuits and cratering the economy.

And yet, before "Worth" is half finished, these characters will find themselves struggling to follow their own protocol as they meet different victims who fall through the cracks or don't quite fit the legal framework of the fund they're managing. Before long, these characters do become emotionally attached, and that's where the film's greatest strength lies.

"Worth" does a grand job of showing several different people who lost loved ones on 9/11, but it also highlights victims that present complicated situations. Perhaps the most infuriating is a gay man who lost his partner on 9/11 and wouldn't receive a cent from the fund because this film was set in a time where no state had yet legalized same-sex marriage.

In Vermont, the first same-sex civil unions were recognized in July 2000, and this man even notes the couple was just weeks away from going up to Vermont for that very reason. But as the fund is guided by state laws that don't recognize their relationship, the deceased gay man's restitution goes to his homophobic parents, despite Biros' best efforts to help change that course.

It's situations like this that keep Feinberg from being the detached and analytical legal arbiter he wishes to be. He's given a deadline of two years to get 80% of 9/11 victims to sign up for the fund, and most of this movie is just him struggling to hit even half that number.

The main voice trying to get Feinberg to ditch his formula that determines how much money goes to certain victims (based on things like annual salary, remaining family, life insurance packages, etc) is a man named Charles Wolf (Stanley Tucci) who lost his wife in the attack.

Wolf doesn't have to do much in this movie to be a reasonable voice aside from show up now and again to ask questions about the value of human life. Tucci does this well, and audiences should be able to see why so many 9/11 victims rally to him and his blogs/meetings that seem set against Feinberg's formula.

On the other side of Feinberg is a lawyer named Lee Quinn (Tate Donovan) trying to get more money for certain clients who lost wealthier victims. Donovan plays a good antagonist who works hard to steer toward giving more weight to his special interests.

Shunori Ramanthan plays a kind lawyer named Priya Khundi working on Feinberg's team, and she represents the humanity of the situation with her heartfelt pleas for exceptions to the rule, long before Feinberg's eyes are opened to that necessity. Her performance and reminder of humanity throughout "Worth" are a good foil for Feinberg's analytical efforts to remain detached.

"Worth" is a complicated drama that can't possibly cover every complexity among compensating survivors of the 9/11 attacks, but what intricate layers it is able to show, it does well. Life is a mixed bag, but this movie is a good snapshot of that convolution where 9/11 was concerned.

In two hours, Feinberg never gets an exact answer to how much a human life is worth. But maybe that's because there is no exact answer. There's only a just effort and dedicated search to find an answer to that question. And that's from where the resolution of "Worth" arises.

Netflix has a solid drama on its hands that stands tall atop powerful performances from Keaton and Tucci and heartbreaking moments from a number of victims who remind viewers the story is far from fictional.

"Worth" releases today in select theaters and the aforementioned streaming giant.