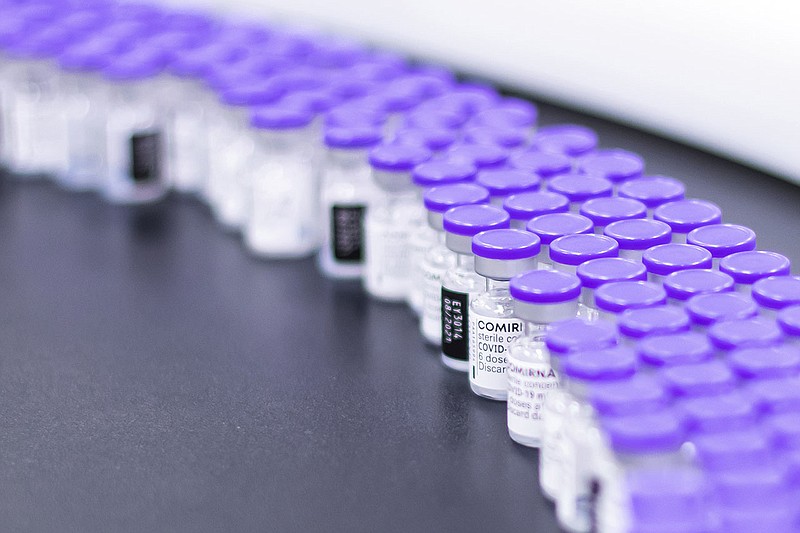 Vials of the Pfizer-BioNTech covid-19 vaccine roll out for packaging in March at the company’s facility in Puurs, Belgium. Pfizer is still expected to be approved for a third dose by Sept. 20. (AP/Pfizer)

WASHINGTON -- President Joe Biden's plans to start delivery of booster shots by Sept. 20 for most Americans who received covid-19 vaccines are facing new complications that could delay the availability of third doses for those who got the Moderna vaccine, administration officials said Friday.

Biden announced last month that the administration was planning for boosters to be available to all Americans who received mRNA vaccines in an effort to provide more enduring protection against the coronavirus, pending approvals from the Centers for Disease Control and Prevention and the Food and Drug Administration.

Those agencies, though, are awaiting critical data before signing off on the third doses, with Moderna's vaccine increasingly seen as unlikely to make it by Sept. 20.

According to one official, Moderna produced inadequate data for the FDA and CDC to recommend a third dose and the FDA has requested additional data that is likely to delay those boosters into October.

Pfizer, which is further along in the review process, in part because of data collected from the vaccine's use in Israel, is still expected to be approved for a third dose for all by Sept. 20. A key FDA panel is to review Pfizer's data Sept. 17.

[Video not showing up above? Click here to watch » arkansasonline.com/94idaho/]

Data for boosters on Johnson & Johnson's single-dose vaccine won't be available for months, as that shot wasn't approved until February, officials said.

Most of the 206 million Americans at least partially vaccinated received the Pfizer shot, but about 80 million received the Moderna vaccine, according to CDC data.

The administration's public pronouncement about booster availability, a break from the more deliberate and behind-the-scenes planning that defined its early vaccination campaign, sparked concerns from some that the White House was getting ahead of the science on boosters.

"The announcement in August kinda jumped the gun," said Dr. Stephen Ostroff, former acting FDA commissioner during the administration of President Barack Obama. "They needed to say something, but they could have just said, 'We're working on boosters, more to come.'"

[Video not showing up above? Click here to watch » arkansasonline.com/94mu/]

The White House said it was merely preparing for the boosters' eventual approval, and that the reviews were "all part of a process that is now underway."

"We are awaiting a full review and approval by the FDA and a recommendation by the ACIP," said White House spokesman Chris Meagher, referring to the CDC's Advisory Committee on Immunization Practices. "When that approval and recommendation are made, we will be ready to implement the plan our nation's top doctors developed so that we are staying ahead of this virus."

The administration had been preparing for months for the possibility that boosters would be required, maintaining America's supply of doses and devising promotion plans with the same intensity that it brought to the initial vaccination campaign, Zients told reporters Thursday.

Biden on Aug. 18 touted boosters as a protection against the highly transmissible delta variant, which is raging across the country and slowing the economic recovery from the pandemic, as well as potential variants to come.

Dr. Anthony Fauci, the nation's top infectious-disease expert, has become a champion of the booster campaign. He told reporters Thursday that he believes it is likely that all Americans will need to get a third dose to be considered fully vaccinated.

A formal determination that a third dose is required for "full vaccination" would have broad implications for schools, businesses and other entities that have implemented shot mandates.

The issue of boosters has been fraught for months, punctuated by fierce debate about whether they are needed and when they should be administered. Critics say the announcement that boosters might be available close to Sept. 20 placed too much pressure on the FDA and the CDC to get their reviews done quickly.

"I was really relieved to hear that they are going to take more time reviewing the data," said Celine Gounder, an epidemiologist and member of Biden's coronavirus transition task force. "There was some concern that they were jumping the gun for additional doses for the general population." She said there is enough data to justify boosters for "very specific groups, but outside of that there's not really compelling data."

She added: "It's almost like they were treating the anxiety rather than the public health issue."

This week, news broke that two top vaccine officials, including the head of the FDA's vaccine office, would retire this year. Those familiar with the situation said the career officials were frustrated with the White House announcement on boosters, but it is unclear whether that led to their exits.

Other experts argue the federal health agencies were not always as fast as they needed to be considering the urgent need to slow the delta variant. Data has shown vaccines lose some potency over time, while also suggesting booster shots are effective at bolstering the immune response.

Officials involved in last month's booster announcement said that it was the culmination of intensive discussion among top doctors across the administration. The physicians grew increasingly concerned about rising cases, hospitalizations and particularly the growing number of breakthrough infections.

After months of falling behind the curve on the pandemic, officials wanted to lay out a plan for boosters, with caveats about regulatory approval, because they felt the data was clear on waning immunity.

"Everyone wants to be thorough," said one official involved in the process, who spoke on condition of anonymity to describe internal discussions. "Everyone wants to assure safety, but it can't be business as usual in the middle of a pandemic."

But on Friday, some people familiar with the situation described the September date as "aspirational" -- an aspiration that the FDA this week realized it wouldn't be able to fulfill, at least for the Moderna and Johnson & Johnson products.

The Moderna data was more complicated than expected and required more analysis, said people who spoke on condition of anonymity because they were not authorized to discuss the situation.

Brian Pierce, a coroner in Baldwin County, Ala., thought he had seen the last of the coronavirus months ago as the area's death count held steady at 318 for most of the spring and summer. But then in July and August, the fatalities began mounting, and last week things got so bad that the state rolled a trailer into his parking lot as a temporary morgue.

"I think most people were thinking, 'We're good,'" he said. "Life was almost back to normal. Now I'm telling my kids again to please stay home."

Nationally, covid-19 deaths have climbed steadily in recent weeks, hitting a seven-day average of about 1,500 a day Thursday, after falling to the low 200s in early July -- the latest handiwork of a contagious variant that has exploited the return to everyday activities by tens of millions of Americans, many of them unvaccinated.

The dead include two teachers at a Texas junior high school who died last week within days of each other; a 13-year-old middle-school boy from Georgia; and a pregnant nurse, 37, in Southern California who left behind five children.

What is different about this fourth wave in the United States is that the growing rates of vaccination and natural immunity have broken the relationship between infections and deaths in many areas.

The daily count of new infections is rising in almost every part of the country. But only some places -- mostly Southern states with lower vaccination rates -- are seeing a parallel surge in deaths. The seven-day average of deaths is about a third of what it was in January, the pandemic's most deadly month, but is forecast to continue rising as high numbers of patients are hospitalized.

While most regions with increasing deaths have lower vaccination rates, that isn't the case for all of them.

Florida, for example, where more than 53% of the population is fully vaccinated, is the worst-hit state in terms of daily deaths, which have averaged 325 over the past week, alongside almost 20,000 new daily infections on average.

Despite resistance from school boards, Florida Gov. Ron DeSantis has fought to enforce his ban on mask mandates and this week made good on a threat to withhold salaries from some of them even after a judge ruled the ban unconstitutional.

David Wesley Dowdy, an epidemiologist at the Johns Hopkins Bloomberg School of Public Health, said the situation underscores the unanswered questions about the virus 18 months out -- and the limitations of mathematical forecasting to predict the daily choices of 330 million Americans.

"The driving factor in the current wave is human behavior -- how people interact and how people respond to risk -- and that is really very unpredictable," he said.

"We are in a perfect storm of viral changes and behavioral changes," agreed Lauren Ancel Meyers, director of the University of Texas Covid-19 Modeling Consortium.

Virtually every time that humans have underestimated the virus and let down their guard, deaths have surged.

Deborah Birx, coordinator of former President Donald Trump's coronavirus task force, suggested in March 2020 that mitigation measures might keep deaths at 100,000 to 240,000 under the most optimistic scenario. But by the end of 2020, when vaccines were authorized for emergency use, the nation had long surpassed those numbers, and forecasters predicted U.S. deaths would top out at around 550,000.

As of Thursday, the country has logged more than 645,000 deaths -- and many experts believe we are not yet at the peak.

Meanwhile, the World Health Organization is monitoring a new coronavirus variant called "mu" -- known by scientists as B.1.621 -- and has added it to the list of "variants of interest" because of preliminary evidence that it can evade antibodies.

Fauci said the United States also was monitoring the variant, which was identified in Colombia in January and now makes up 39% of all cases there.

The WHO says the variant has the potential to evade immunity provided by vaccines and antibodies, and because of that, it was listed as a "variant of interest" on Monday.

Still, Fauci said that it is not at all common in the United States, where the delta variant makes up 99% of all covid-19 cases. He said the new variant "has a constellation of mutations that suggests it would evade certain antibodies," but there is so far very little clinical data supporting that conclusion.

Fauci added that vaccines are still quite effective against variants with similar characteristics.

"Bottom line, we are paying attention to it," he said. "We take everything like that seriously, but we don't consider it an immediate threat right now."

Information for this article was contributed by Zeke Miller and Matthew Perrone of The Associated Press; by Tyler Pager, Laurie McGinley, Ariana Eunjung Cha, Dan Keating, Jacqueline Dupree and Ben Guarino of The Washington Post; and by Lauren McCarthy of The New York Times.