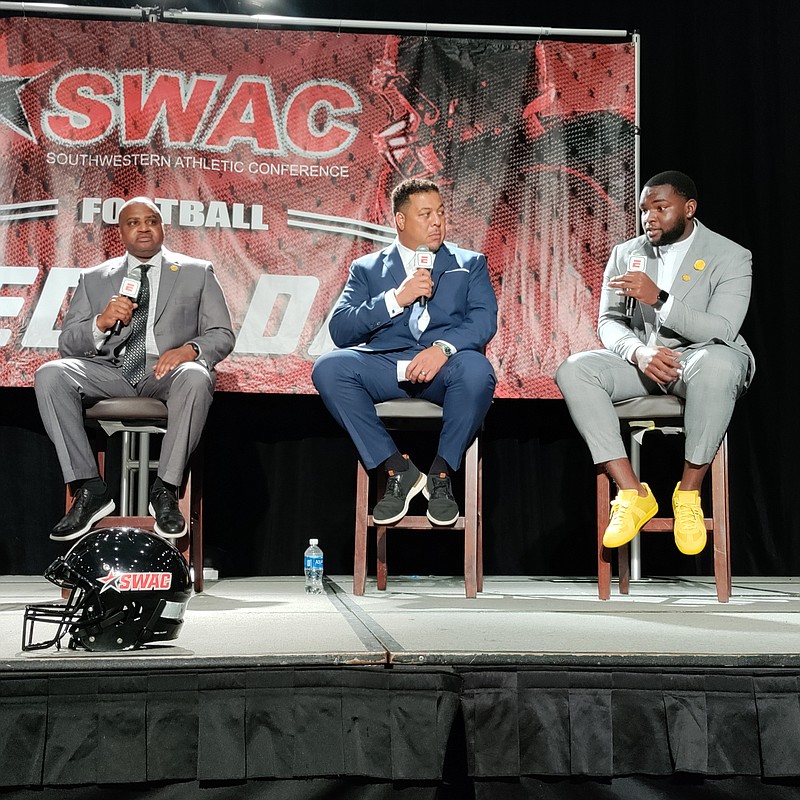 The restaurant chain announced in a news release it has selected Evans and three other linemen to make up Denny's All-Pancaker Team, a play on the name of an offensive block a player can make by landing a defender flat on his back.

Evans took to social media to release a video of still photographs of him signing a contract with the diner chain known for its pancakes and other breakfast dishes and meals.

"Extremely honored to announce my selection to the @DennysDiner #AllPancakerTeam," Evans said. "Catch me at Denny's grubbing on real pancakes after stacking them up on the field [pancake stack icon]."

The 6-foot-4, 295-pound Evans, from Houston, has made a name for himself as a two-time All-Southwestern Athletic Conference first-team performer and is one of two Golden Lions who participated in July's SWAC Media Day. Evans flashed his gold-colored shoes on the main stage while talking with ESPN3.com personalities for the live stream of the event, drawing a comparison to Pittsburgh Steelers and UAPB great L.C. Greenwood from analyst Jay Walker.

"At Denny's we love college football just as much as we love our pancakes and our patrons," Denny's executive vice president and chief brand officer John Dillon said in the release. "Over the course of their promising athletic careers, these remarkable young players have perfected pancaking the opposition. We couldn't be more excited to work with Jalen, Mark, Nicholas and Tristan as they shape the future of this beloved sport and universities with their hard work on the field and in the classroom.

"Given how much all college institutions contribute equally to the beautifully diverse fabric of this country and the activities we enjoy together, it was important to us to bring together a group of athletes representing both Power Five and HBCU schools. We're thrilled to not just officially sponsor these star athletes as they build their football careers, but to help fuel them on the field with stacks of our delicious pancakes."

In addition to being sponsored by Denny's, the All-Pancakers will participate in brand initiatives including a Signing Day video, posting social content ahead of game days and promoting the brand's monthly Spotlight Stacks, which the chain defines as "a rotating spotlight on its bestselling, mouthwatering pancakes."

Evans released his video on social media ahead of UAPB's season opener against Lane College, scheduled for 6 p.m. today at Simmons Bank Field.

"But these players know how to balance their responsibilities -- so fans can rest assured that their work with America's Diner won't distract from their work on the field -- or in the classroom," Denny's said.

Financial terms of the linemen's NIL deals were not released, but according to Denny's: "They'll also be paid in all the fluffy stacks of Denny's buttermilk pancakes they can eat."

The closest Denny's diners to Pine Bluff are in Bryant and Little Rock.