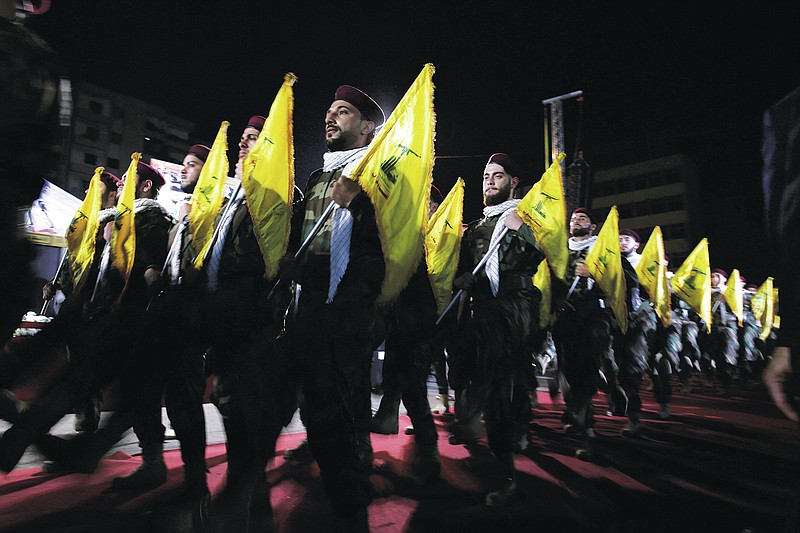 FILE - In this May 31, 2019 file photo, Hezbollah fighters march at a rally to mark Jerusalem day, in the southern Beirut suburb of Dahiyeh, Lebanon. As Lebanon sinks deeper into poverty and collapse, many Lebanese are more openly criticizing the Iran-backed Hezbollah, blaming it for its role in the devastating, multiple crises plaguing the country. This includes a dramatic currency crash and severe shortages in medicines and fuel that has paralyzed the country. (AP Photo/Hassan Ammar, File)

BEIRUT (AP) -- Driving back to base after firing rockets toward Israeli positions from a border area last month, a group of Hezbollah fighters was accosted by angry villagers who smashed their vehicles' windshields and held them up briefly.

It was a rare incident of defiance that suggested many in Lebanon would not tolerate provocations by the powerful group that risk triggering a new war with Israel.

As Lebanon sinks deeper into poverty, many Lebanese are more openly criticizing Iran-backed Hezbollah. They blame the group -- along with the ruling class -- for the devastating, multiple crises plaguing the country, including a dramatic currency crash and severe shortages in medicine and fuel.

"Hezbollah is facing its most consequential challenge in maintaining control over the Lebanese system and what is called the 'protective environment of the resistance' against Israel," said Joe Macaron, a Washington-based Middle East analyst.

The incident along the border and other confrontations -- including a deadly shooting at the funeral of a Hezbollah fighter and rare indirect criticism by the country's top Christian religious leader -- have left the group on the defensive.

The anger has spread in recent months, even in Hezbollah strongholds where many have protested electricity cuts and fuel shortages as well as the currency crash that has plunged more than half the country's 6 million people into penury.

In its strongholds, predominantly inhabited by Shiite Muslims, it is not uncommon now for people to speak out against the group. They note that Hezbollah is paying salaries in U.S. dollars at a time when most Lebanese get paid in Lebanese currency, which has lost more than 90% of its value in nearly two years.

Protests and scuffles have broken out at gas stations around Lebanon and in some Hezbollah strongholds. In rare shows of defiance, groups of protesters have also closed key roads in those areas south of Beirut and in southern Lebanon.

In recent speeches, Hezbollah leader Sayyed Hassan Nasrallah has appeared angry, blaming the shortages on what he describes as an undeclared Western siege. The chaos in Lebanon, he said, is being instigated from a "black room" inside the U.S. Embassy.

Critics say that rather than push for reform, Hezbollah has stood by its political allies who resist change. They say the group is increasingly pulling Lebanon into Iran's orbit by doing its bidding, and that U.S. sanctions against Iran and Hezbollah have made things harder.

Where Hezbollah was once considered an almost sacred, untouchable force fighting for a noble cause -- the fight against the Israeli enemy -- it is now seen by many simply as part of the corrupt political clique responsible for the country's epic meltdown. Still, when it comes to fighting Israel, the group enjoys unwavering backing within its base of support.

Often criticized for operating as a state within a state, Hezbollah has tried to ease the effects of the crisis on its supporters in similar fashion.

"We will serve you with our eyelashes," is Hezbollah's slogan to serve the extremely poor in its communities -- a Lebanese term meaning they are ready to sacrifice anything to help others.

The tens of thousands carrying Sajjad cards not only can buy highly subsidized products from dozens of shops spread around Lebanon -- mostly staples made in Lebanon, Iran and Syria -- but can also get medical treatment and advice at 48 Hezbollah-run clinics around Lebanon.

Nasrallah is also organizing a sea corridor carrying oil from Iran to Lebanon to help alleviate the fuel shortages, with the first tanker believed to be on its way. The move has been praised by Hezbollah's supporters and heavily criticized by its opponents, who say it risks bringing more sanctions on Lebanon.

In the border incident, villagers from the minority Druze sect intercepted Hezbollah fighters on their way back after firing rockets toward a disputed area held by Israel. The villagers briefly detained them and the mobile rocket launcher they used after accusing them of putting them at risk if Israel strikes back.

The fighters and the launcher were then handed over to Lebanese troops, who released them on the same day.

Later, Hezbollah angered many Christians after supporters launched a social media campaign against the head of Lebanon's Maronite Catholic church, the country's largest, accusing him of treason after he criticized the group for firing the rockets on Israeli positions.

The widely feared group has been hammered by accusations from its local opponents. They include silencing its opponents, facilitating smuggling of fuel and other subsidized items to neighboring Syria, and alienating oil-rich Gulf countries like Saudi Arabia, leading them to halt financial assistance because of Hezbollah's dominance of Lebanon.

The most serious charge has been a claim by opponents at home that the group brought in the hundreds of tons of ammonium nitrate that exploded at Beirut's port last year, killing at least 214 people, wounding thousands and destroying parts of the capital.

No direct connection to Hezbollah has emerged, but unsubstantiated theories that tie the group to the stockpile abound. One claim is that Hezbollah imported the chemicals on behalf of the Syrian government, which used them in barrel bombs against rebel-held areas during the neighboring country's 10-year conflict.

"Hezbollah's agencies are active at the port and this is known to security agencies and all Lebanese. Why is Sayyed Hassan Nasrallah above questioning?" asked Samy Gemayel, head of the right-wing Christian Kataeb Party recently.

Hezbollah has repeatedly denied any link to the ammonium nitrate. But Nasrallah further angered families of the victims and other Lebanese recently by criticizing the judge leading the investigation into the blast, suggesting he should be replaced. Nasrallah described Judge Tarek Bitar as "politicized" after he filed charges against some legislators and former Cabinet ministers allied with Hezbollah.

"There is an attempt to satanize Hezbollah and tarnish its image," said Lebanese University political science professor Sadek Naboulsi. The professor, who has ties to the group, accused foreign powers including Saudi Arabia, the United Arab Emirates, Israel and the U.S. of seeking to incite internal strife between Lebanon's Shiite and Sunni Muslim communities with the aim of weakening Hezbollah. He added that Hezbollah had overcome such pressures in the past and emerged more powerful.

A serious test for Hezbollah came in early August when a funeral of a militant came under fire by suspected Sunni gunmen on the southern entrance of Beirut. Three Hezbollah supporters were killed and 16 were wounded in the shooting in the town of Khaldeh.

Hezbollah did not retaliate and instead called on Lebanese authorities to investigate the case.

"An increasing number of Lebanese are realizing that the concept of a Lebanese state cannot coexist with a powerful armed militia serving an outside power," wrote Michael Young, editor of Diwan, the blog of the Carnegie Middle East Center.

Macaron said Hezbollah will not be the same after the crisis and will have to adapt to ensure political survival in the long term.

"What they can do at this point is to limit losses as much as possible," he said. 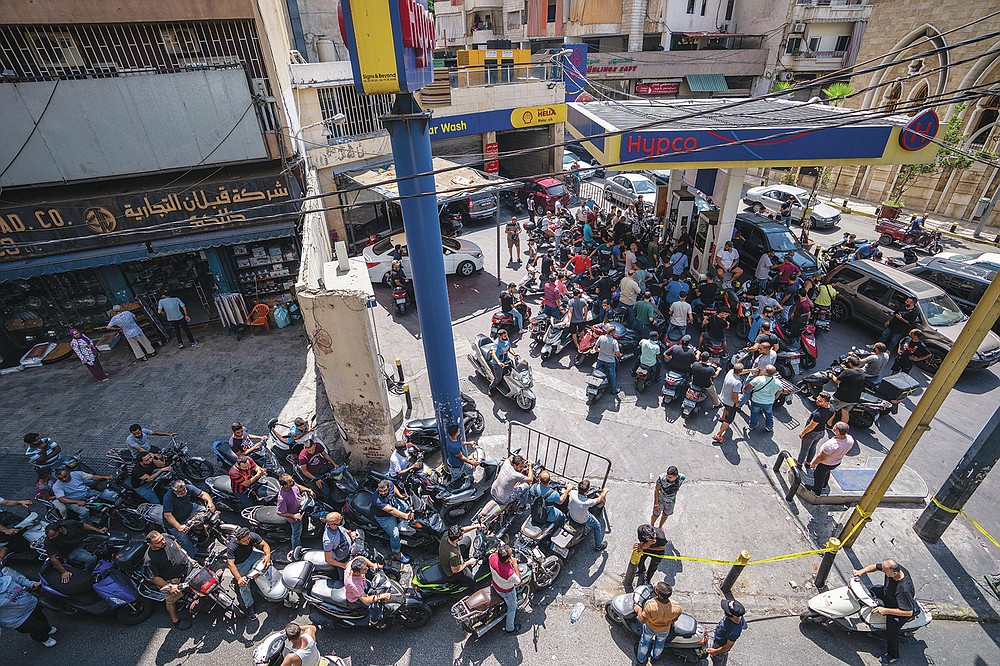 Motorcycle drivers wait to get fuel at a gas station in Beirut, Lebanon, Tuesday, Aug. 31, 2021. Lebanon is struggling amid a two-year economic and financial crisis that the World Bank has described as among the worst the world has witnessed since the mid-1850s. The crisis has left Lebanese suffering from severe shortages in fuel and basic goods like baby formula, medicine and spare parts. (AP Photo/ Hassan Ammar) 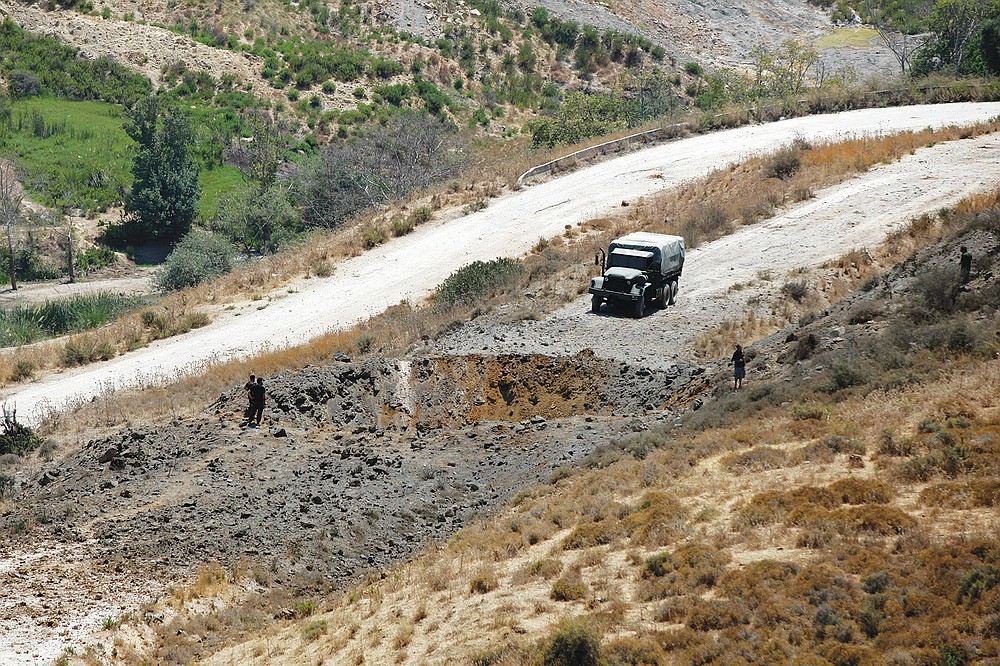 FILE - In this Aug 5, 2021 file photo, Lebanese troops stand next to a crater caused by an Israeli airstrike in Dimashqiya farmlands, southern Lebanon. As Lebanon sinks deeper into poverty and collapse, many Lebanese are more openly criticizing the Iran-backed Hezbollah, blaming it for its role in the devastating, multiple crises plaguing the country. This includes a dramatic currency crash and severe shortages in medicines and fuel that has paralyzed the country. (AP Photo/Mohammed Zaatari, File) 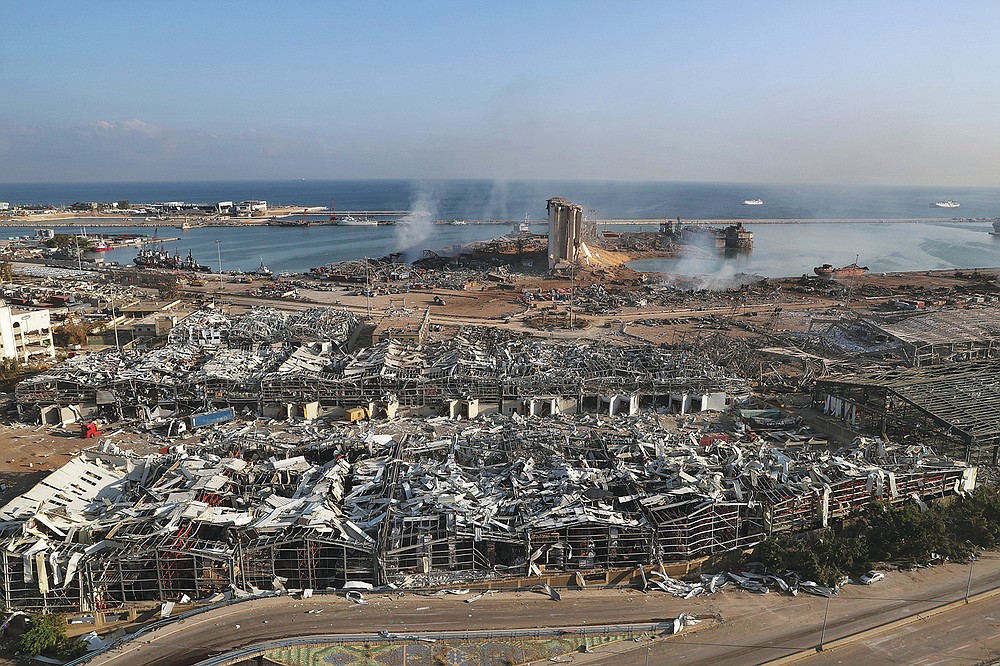 FILE - This Aug. 5, 2020 file photo, shows the scene of an explosion that hit the seaport of Beirut, Lebanon. As Lebanon sinks deeper into poverty and collapse, many Lebanese are more openly criticizing the Iran-backed Hezbollah, blaming it for its role in the devastating, multiple crises plaguing the country. This includes a dramatic currency crash and severe shortages in medicines and fuel that has paralyzed the country. (AP Photo/Bilal Hussein, File) 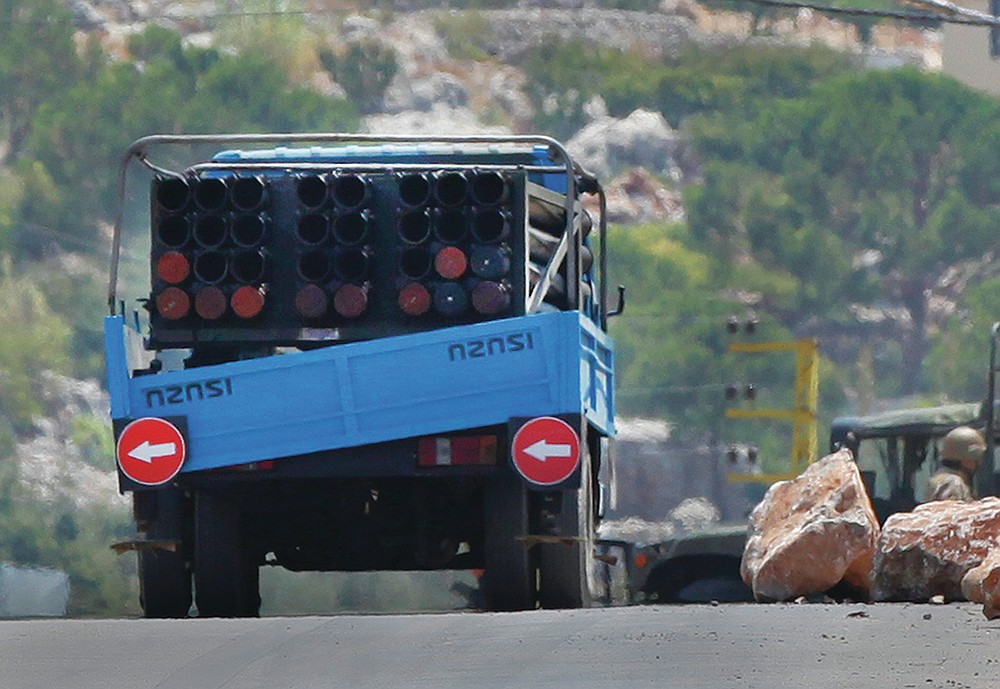 FILE - In this Aug. 6, 2021 file photo, a rocket launcher placed on a pick up truck that was used by Hezbollah to fire rockets near Israeli positions, is seen in the southeastern village of Shwaya, near the border with the Golan Heights, Lebanon. As Lebanon sinks deeper into poverty and collapse, many Lebanese are more openly criticizing the Iran-backed Hezbollah, blaming it for its role in the devastating, multiple crises plaguing the country. This includes a dramatic currency crash and severe shortages in medicines and fuel that has paralyzed the country. (AP Photo/Mohammed Zaatari, File)