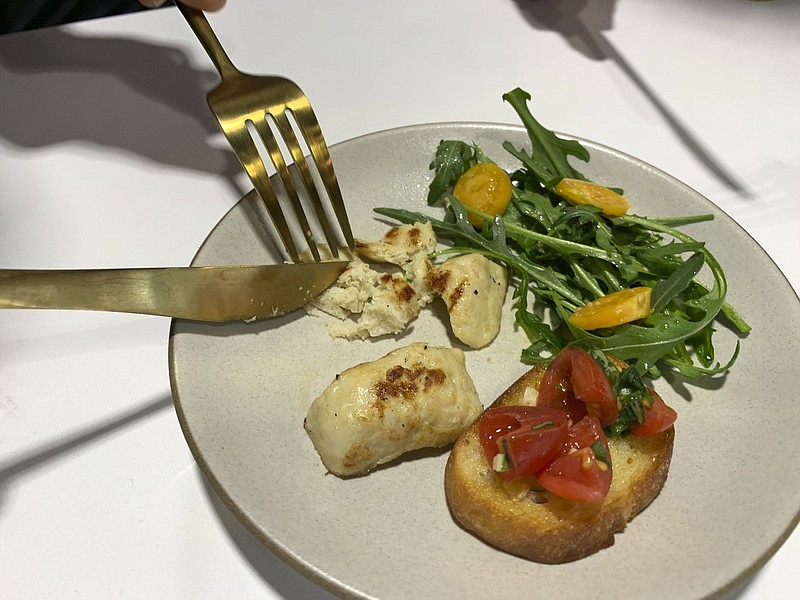 Grilled chicken produced in a Memphis Meats laboratory in Emeryville, Calif., is displayed in this 2019 file photo. (AP)

The U.S. Department of Agriculture is seeking public comments on its labeling rules regarding meat and poultry goods derived from animal tissue cells.

The Food Safety and Inspection Service on Thursday published an advanced notice of proposed rule-making on cell-based meats and plans to use the comments to inform future labeling requirements for these products.

Cultured meat products, grown from traces of cells from living animals, have been a theoretical possibility for decades. Food companies have only recently started the process to create products for sale.

Production costs and other barriers prevent the items from filling store coolers. Researchers and advocates are optimistic about the benefits of the products and their potential disruption of the food industry.

In anticipation of the commercial arrival of these products, USDA and FDA agreed jointly in March 2019 to oversee the production of foods made using cell culture technology. Reactions were mixed. Ranchers, industry groups and other critics shared concerns about labeling and marketing of these products. In response, the USDA received thousands of comments on the topic and two petitions for rule-making.

"We want to hear from stakeholders and will consider their comments as we work on a proposed regulation for labeling these products," Eskin said in a written statement Thursday.

The agency would like the public to consider consumer expectations about labeling, names that would be neither false nor misleading, economic data and any consumer research related to labeling nomenclature for products made from cell culture technology.

The advanced notice also described how the agency would evaluate labels for these products if they are submitted before rule-making is completed.

Researchers and companies understand the potential upside. A study at Oxford University estimated that cultured beef could be produced with up to a 96% reduction in greenhouse gas emissions and water consumption, compared with conventional meat. Researchers also found cultured beef to be healthier: no GMOs, no food-borne illnesses and no antibiotics.

Tyson Foods and Cargill already have investments in Memphis Meats, a company backed by philanthropists Bill Gates and Richard Branson, among others, that produces chicken, beef and duck from animal cells. Efforts are underway to scale operations and reduce manufacturing costs to be one of the pioneers of cultured meat.

Since Dutch scientist Mark Post introduced a cultivated meat burger on live television in 2013, the industry has grown to more than 60 companies on six continents, according to the Good Food Institute. Singapore approved the world's first cultivated meat item for sale in December 2020.

There is a 60-day period for comment on the advanced notice of proposed rulemaking.

Comments can be submitted by mail, in-person or online at regulations.gov.