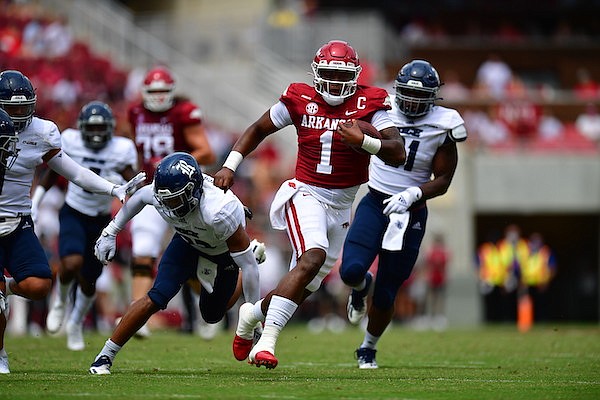 Arkansas quarterback KJ Jefferson (1) runs for a touchdown during the first quarter of a game against Rice on Saturday, Sept. 4, 2021, in Fayetteville.

Jefferson had touchdown runs of 34 and 5 yards, and a touchdown pass of 9 yards to Tyson Morris in the win, his first as the Razorbacks' starter.

Jalen Catalon finished with 11 tackles and a pair of interceptions as well. Bumper Pool, who was disqualified for targeting in the second half, led the team with 14 tackles.

We will have much more from today's game later on WholeHogSports.com.

:58, 4Q: Dominuque Johnson's 3-yard touchdown run gives Arkansas a 38-17 lead. It is the first rushing score of his career.

2:37, 4Q: Jalen Catalon just came up with his second pick of the game. That'll do it. All that's left to decide is if Arkansas covers the spread or not.

4:07, 4Q: KJ Jefferson's first touchdown pass of the day goes to Tyson Morris from 9 yards out. The Razorbacks' lead is 31-17. Morris has three catches on four targets for 42 yards and the score today.

5:25, 4Q: KJ Jefferson nearly had his third rushing score of the game, a 68-yarder on a well-run option play, but Ketron Jackson was flagged for holding about 30 yards downfield.

7:05, 4Q: Bumper Pool has been DQ'd from the game for targeting. Arkansas is now down both of its starting linebackers for targeting. Pool will miss the first half of the Texas game for a hit that was certainly targeting but not all that vicious.

9:42, 4Q: Montaric Brown jumped an out route and picked off Wiley Green at midfield on 3rd-and-9. It is Arkansas' second pick of the day, following Jalen Catalon's that led to the go-ahead touchdown. Razorbacks, though, can't take advantage and punt from the Rice 42.

Reid Bauer's kick goes out of bounds at the Rice 4. The call to punt by Sam Pittman was booed by some fans, but it paid off.

12:44, 4Q: Nothing has been easy for the Razorbacks' offense. Myron Cunningham was called for a false start before the Razorbacks could snap the ball. Trelon Smith, several plays later, gets into the end zone for a score from 2 yards out. Razorbacks have a 24-17 lead.

Three straight scoring drives for Arkansas after a rough five-series stretch in the first half that resulted in four punts and a pick.

13:51, 4Q: Markell Utsey tipped a Rice pass at the line and Jalen Catalon picked it, returning the ball inside the Owls' 10. After a penalty, the Razorbacks are at the 4.

End 3Q: Freshman kicker Cam Little nailed a 34-yard field goal to tie the game at 17 with 18 seconds left in the quarter. That was a nice series from running back Raheim Sanders. Showed great burst and vision on several carries that got the Razorbacks in field goal range.

Rice will begin the fourth quarter facing 2nd-and-three at its 26.

4:42, 3Q: Big-time stop from the Arkansas defense on 4th-and-one deep in Razorbacks territory. Greg Brooks and Bumper Pool credited with the tackle for loss near the Arkansas sideline. Brooks went low and Pool up high.

Razorbacks take possession at their own 18, looking to tie the game or take the lead. We'll see if the previous series gave the group a much-needed shot in the arm.

8:11, 3Q: KJ Jefferson finally throwing the ball vertically on this drive. He hit Tyson Morris for 31 yards and De'Vion Warren for 10. Morris made a terrific one-handed grab on a 50-50 ball. Razorbacks at the Rice 9.

Jefferson later got into the end zone for the second time today on the ground. Rice's lead has been trimmed to 17-14.

12:15, 3Q: Razorbacks' defense gives up a quick first down then puts the clamps on Rice to open the half. Poor punt from the Owls and a penalty will set up Arkansas at its 47. That goes down as a 17-yard punt.

Razorbacks had a punt blocked, then another 25-yard punt and they were penalized 8 times for 66 yards.

Rice is averaging 3.2 yards per play and 2.5 per rush, but it has the lead at the break. The Owls' average field position is the 50. Arkansas' is its own 17.

Sam Pittman on the radio halftime show coming off the field: "If it wasn’t for the defense we’d be down 30. We got a punt blocked, penalties all over the place....It’s embarrassing."

4:19, 2Q: LaDarrius Bishop hit with pass interference at the goalline on third down, moving Rice to the Arkansas 2. Two plays later, the Owls score on the ground and take a 10-7 lead.

5:50, 2Q: Rice picks up chunk yardage on 3rd-and-three and gets down to the Arkansas 7. Jalen Catalon also hit with a late hit out of bounds on the play. He has to cut those out.

6:40, 2Q: Short possession for Arkansas there. Treylon Burks dropped another pass, then on third down was brought down behind the line of scrimmage on a reverse. He has two drops today.

After a 25-yard punt from Reid Bauer, Rice is again in Arkansas territory at the 41.

7:57, 2Q: Arkansas' defense once again began a possession in its own territory and it stood up. Jalen Catalon made a terrific play diagnosing a reverse from Rice on third down. His tackle for loss brought out the Owls' punt team. He and Bumper Pool have a team-high 5 tackles so far.

Arkansas will begin its next drive at its 10.

9:37, 2Q: KJ Jefferson was just picked off for the first time after rolling to his right and firing toward the Rice sideline. The Owls begin their next drive at the Arkansas 49. Jefferson is 4 of 9 for 21 yards and the INT.

11:55, 2Q: Arkansas' defense held up well there and limited Rice to a 25-yard field goal. The Razorbacks' lead is 7-3. Have to give credit to Arkansas' defense. It has been put in a pair of short-field situations already and forced the Owls into field goal tries each time.

14:34, 2Q: Arkansas just had its punt blocked by the Owls deep in its own territory. It is the third blocked punt allowed by the Razorbacks since the beginning of last season. The Owls are at the 10.

End 1Q: Arkansas leads Rice 7-0 after one quarter. KJ Jefferson ran 34 yards for the only score of the game to this point. He ends the period 2 of 6 passing for 7 yards. Both completions came on the Razorbacks' most recent series, which will end in a punt when the second quarter begins.

Jefferson found De'Vion Warren on a comeback route for 4 yards then Treylon Burks for 3 across the middle on third down.

Greg Brooks leads the Arkansas defense with 4 tackles and Joe Foucha has 3.

1:21, 1Q: Rice put together an OK drive, but it has to be kicking itself for getting no points after getting the ball at Arkansas' 35. A 36-yard field goal misses wide right, and the Razorbacks take back over at their 20.

4:30, 1Q: Nothing doing for the Razorbacks on drive No. 3. Trelon Smith ran for a short gain moving right, then KJ Jefferson threw incomplete for Treylon Burks twice. Burks dropped the first pass a yard or two behind the line of scrimmage. Jefferson is now 0 of 4 throwing the ball.

Rice's next series will start at Arkansas' 35.

5:26, 1Q: Defensive end Tre Williams did a great job pressuring Wiley Green on third down a moment ago. Green was able to complete the throw, but it went for no gain and the Owls were forced to punt away.

Arkansas will begin its next series at its own 8 after a block in the back on Ketron Jackson on Greg Brooks' punt return.

8:03, 1Q: Grant Morgan has been disqualified from the game after being hit with a targeting call on Rice QB Wiley Green. Andrew Parker is on the field in his place. Really tough break for Morgan.

8:23, 1Q: Trelon Smith started Arkansas' first scoring drive of the season with a 20-yard run. Rocket Sanders then picked up 12 yard on his first career carry, getting the edge and cutting upfield before looking to barrel over a defender. He gained 12 on the touch.

KJ Jefferson handled things from there, running in from 34 yards out to put Arkansas up 7-0. The Razorbacks' scoring drive was 8 plays, 80 yards.

10:55, 1Q: Arkansas' defense locked down once Rice got near the 50. The Razorbacks forced a punt after pressuring Green on 3rd-and-eight. Bumper Pool was somewhat close to coming up with a pick on the throw. Jalen Catalon leads the way with a pair of tackles so far.

KJ Jefferson's second offensive possession will begin at his 20 after a touchback on the Owls' punt.

12:59, 1Q: Wiley Green, starting at quarterback today, completed a pass near the Arkansas sideline to Bradley Rozner and he made Montaric Brown miss in space. Rozner picked up 20 yards on the play, putting the Owls near midfield.

13:48, 1Q: KJ Jefferson dropped back to pass on play No. 1 and rolled left, but couldn't find anyone to target and was sacked. Trelon Smith then ran right for 11 yards then Jefferson threw high on a ball intended for Treylon Burks. Razorbacks go 3-and-out.

The Razorbacks began trickling out onto the field about 70 minutes before kickoff. Arkansas' specialists came out first and everyone appears to be accounted for.

Defensive lineman John Ridgeway and defensive back Myles Slusher are not in uniform today but are present on the sideline. Wide receiver Treylon Burks is, and he is going through warmups.

Other players who I did not see in warmups: Marco Avant and Marcus Miller. Avant is attempting to come back from surgery this offseason. Jermaine Hamilton-Jordan and Erin Outley are in shorts and their jersey on the sideline.