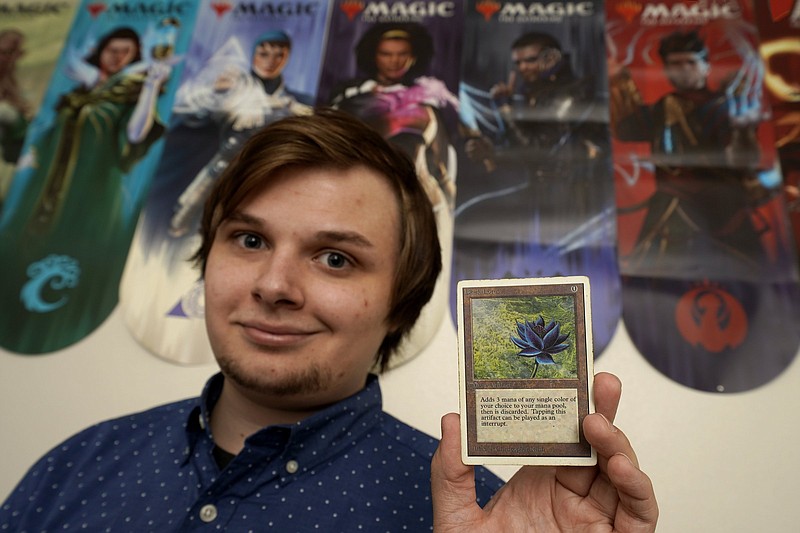 Austin Deceder displays a Black Lotus Magic card in his home office in Kansas City, Mo. Prices of the collectible cards and vintage video games that Deceder and others buy and sell have skyrocketed in the past few months. (AP/Charlie Riedel)

NEW YORK -- Americans have become obsessed with collectibles, bidding up prices for trading cards, video games and other mementos of their youth. The frenzy has brought small fortunes to some, but a deep frustration for those who still love to play games or trade cards as a hobby.

Among the items most sought after -- and even fought over -- are the relics of millennials' childhoods. These include copies of trading cards such as Pokemon's Charizard and Magic: The Gathering's Black Lotus as well as Nintendo's Super Mario Bros. game cartridges. Some cards are selling for hundreds of thousands of dollars and an unopened Super Mario game recently sold for a record $2 million.

This is more than a case of opportunistic collectors looking to cash in on a burst of nostalgia triggered by the pandemic. Everyone seemingly is angling for a piece of the pie.

But while some collectors and investors see dollar signs, others complain about the breakdown of their tightknit communities. Players looking to play in-person again after the pandemic are unable to find the game pieces they want; if the pieces are available, prices have gone up astronomically.

"Prices are going up, and access is going down," said Brian Lewis, who operates a YouTube channel under the name Tolarian Community College.

The collectibles frenzy has been fueled partly by YouTube personalities. Logan Paul, who has 23 million subscribers on YouTube, made several videos where he simply opens up boxes of vintage Pokemon cards, hyping the prices he'd paid and bringing in millions of views.

"It may be a burgeoning industry, but this is still big business. Brands want to reach these audiences," said Justin Kline, co-founder of Markerly, an influencer marketing agency. He estimates Paul may bring in six figures per video in advertising revenue.

The hype has sent collectors scrambling to find out if their Pikachu or Mox Emerald might be worth a fortune. To do so, they turn to grading services, which have been flooded with orders -- some with a wait time of over a year.

In response to record demand, companies are releasing new versions of the games, including premium products that command higher prices. Whether the momentum is sustainable, at least when to comes to prices, is unknown.

But the frenzy goes beyond trading cards. The U.S. Mint released a 100th anniversary collection of the Morgan silver dollar, considered by coin collectors to be one of the most beautiful designs ever made, early this summer. The products sold out in minutes.

There's also been record sales of vintage video games, from the Legend of Zelda to Super Mario 64.

Meanwhile, the trading card community is seeing its own lofty prices as players scramble to find coveted pieces for their collection.

A mint condition Black Lotus from Magic: The Gathering's first set known as Alpha sold in January for more than $510,000. That price is double what a card in similar condition sold for six months before in July 2020.

Austin Deceder, 25, primarily buys and sells cards on Facebook and Twitter as a middleman between players wanting to get out of their games and new players. Deceder had a used Black Lotus card that he says he sold for $7,000 in September 2020. "Here we are now and the price on that same card has doubled."

It's not just the ultra-rare cards seeing inflation. Take the widely available Magic: The Gathering card named Ragavan, Nimble Pilferer. The card, depicting a bespectacled monkey sitting on a hoard of treasure, was $30 earlier this summer. The card now sells for closer to $90, Deceder says.

Not everyone is happy, however. Some enthusiasts say the frenzy has brought out the worst in fans and speculators. Nowhere is this more evident than among collectors of Pokemon cards, with its motto "Gotta Catch 'Em All!"

Boxes of Pokemon trading cards have been routinely sold out at hobbyist shops and big-box retail stores. Fistfights have broken out, requiring chains such as Target to restrict the number of packs an individual customer can purchase. The Pokemon Company says it is trying to print as many cards as possible to keep up.

"Pretty much the entire Pokemon community has deteriorated," said Shelbie, a creator of Pokemon videos under the name Frosted Caribou on YouTube. Shelbie, who declined to give a last name to avoid being a target of harassment, said some harassment in the past has come from some of the community's biggest collectors, particularly when she has talked about prices.

But the surge of interest has been good for the corporations and Wall Street.

Hasbro's Wizards of the Coast division makes the tabletop role-playing game Dungeons & Dragons as well as Magic: The Gathering. Wizards' revenue doubled to $406 million in the second quarter.

Whether that's good for the players who have long participated in these hobbies is unknown. Longtime collectors likely stand to make money in the future, but those who recently entered these communities may be purchasing overpriced cards hyped by those to stand to benefit the most, community leaders said.

"There's now a whole subculture who are using Pokemon as a stock market. I don't know how those people can look at the community and say this is healthy," Shelbie said.