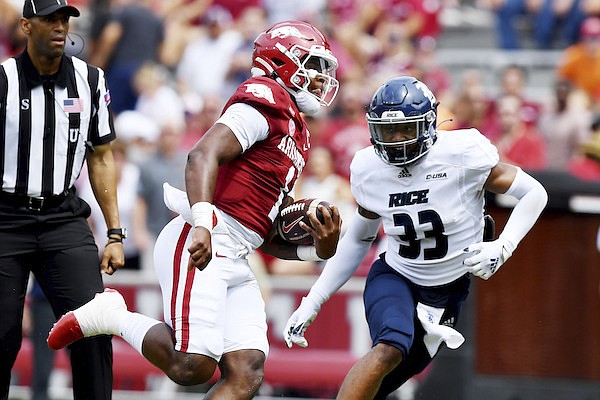 Arkansas quarterback KJ Jefferson (1) runs past Rice defender Myron Morrison (33) to score a touchdown during the first half of a game, Saturday, Sept. 4, 2021, in Fayetteville. (AP Photo/Michael Woods)

The Razorbacks (1-0) trailed 10-7 at halftime and trailed 17-7 after Rice quarterback Wiley Green hit receiver August Pitre for a 41-yard touchdown early in the third quarter.

Arkansas (1-0) overcame a shaky start that second-year coach Sam Pittman called “embarrassing” during an interview on the Razorbacks’ halftime radio show. Arkansas had a punt blocked, committed eight penalties and had only 21 passing yards in the first half.

"We just didn’t play well at all, but we came back in the second half," Pittman said. "We still had way too many penalties but we did catch the ball a little better. KJ started making some plays, I thought the rush got to their quarterback a little bit and he threw us a few interceptions which were big. We've got a lot to improve on.

"I told the team we were going to face adversity but I didn’t know it was going to be that entire first half. Give Rice credit, they were really prepared and they did a nice job. I’m so happy we won, but we didn’t field a very good football team today and we have to get better.”

Jalen Catalon and Montaric Brown combined for three fourth-quarter interceptions, and Rice was stopped behind the line of scrimmage on a fourth-and-1 run play from the Arkansas 18 in the third quarter.

“We always tell the offense, 'It doesn’t matter what, we have your back. I know y’all can get stuff right but trust in us. Know that we have your back. When we get that stop, let that be your momentum,'" said Catalon, who also had 11 tackles. "Eventually they did and got some good possessions going that ended up in touchdowns."

Catalon returned the first pick to the Rice 9, and the Razorbacks had first-and-goal from 4 following a penalty against the Rice quarterback, Green.

Jefferson threw incomplete on second down, but a pass interference call against Rice cornerback Miles McCord gave Arkansas a new set of downs. Smith scored one play after the penalty.

Smith, a Houston native who was playing one of his hometown universities, finished with 102 rushing yards on 22 carries.

Jefferson added 89 rushing yards and scored on touchdown runs of 34 yards in the first quarter and 5 yards in the third. He became the first Arkansas quarterback with multiple rushing touchdowns in the same game since Tyler Wilson at Ole Miss in 2011.

Jefferson also had a 68-yard touchdown called back because of a downfield holding penalty against freshman receiver Ketron Jackson in the fourth quarter.

Jefferson’s 5-yard score answered Rice’s third-quarter touchdown and pulled the Razorbacks within 17-14. It capped a 6-play, 57-yard drive that included completions of 31 yards to Morris and 10 yards to De’Vion Warren.

He didn’t provide the Razorbacks with much else as a passer, though. He completed 12 of 21 passes for 128 yards and threw an interception in the first home start of his career.

Arkansas out-gained Rice 373-308 in total offensive yards, but the Razorbacks committed 13 penalties for 117 yards to help keep the Owls (0-1) close.

"We did what we wanted to do, getting the game to the fourth quarter, tied at 17-17," Rice coach Mike Bloomgren said. "We had everything right there for us. You have to take your hat off to Sam Pittman and the way he prepared his guys. They were in the same spot we were entering the fourth quarter, 17-17. They ended up turning it into a boat race and running us off the field at the end. We weren’t able to stand toe-to-toe with them for 60 minutes like we wanted to.”

Green was 12 of 25 for 152 yards. He threw one touchdown and was intercepted three times.

The Razorbacks lost their two most experienced linebackers to targeting during the game. Grant Morgan was ejected for a hit against Green in the first quarter, and Bumper Pool was thrown out after tackling receiver Jake Bailey in the fourth.

Morgan will be back for the start of the Razorbacks’ scheduled game against No. 21 Texas next Saturday. Pool, who had a team-high 14 tackles, will miss the first half against the Longhorns.

CORRECTION: Errors with the Razorbacks' stat system led to the reporting of some incorrect individual and team stats in an earlier version of this story. Those stats have been updated.