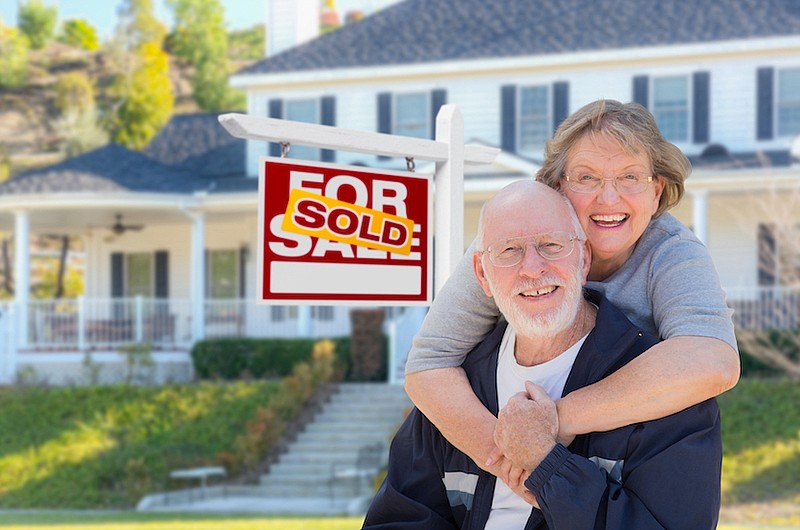 Letting go of a big family home after kids have left the nest is easier when seniors can picture how much better their quality of life can be when they rightsize. (Courtesy of Dreamstime)

Moving is no fun. Neither is getting rid of stuff. And both jobs get harder as we get older. So when senior citizens are looking to downsize and move all at the same time, many just say, "I'll stay put, thank you very much."

It's not just their massive bedroom sets, armoires, hutches and 12-leaf dining room tables holding them back, but also the intangibles. The memories, the family history, their identities are all in jeopardy.

That thorny issue was the focus of the eXp Realty Seniors Network conference last week, where I spoke to real estate agents nationwide about how to help senior citizens through this process — in under an hour. Although I thought the gambit was a bit like expecting a YouTube video to tell you how to remove your own brain tumor, I gave it a shot.

I mean, if you ask most retirees to get rid of a lifetime of acquired stuff and move from their large, raised-the-kids-here-and-hosted-umpteen-potlucks-and-as-many-pick-up-ballgames house to a place that better suits their current lifestyle, will cost less, and is easier to maintain, they will act as if you asked them to stand naked on the freeway.

And yet, that reluctance to lighten up, let go and move on is commonly all that stands between them and a better life, and also between a real estate agent and a listing.

Don Maycott, a Realtor with eXp Realty and co-founder of the seniors network, invited me to address the group after he stumbled across my new book, "What to Do With Everything you Own to Leave the Legacy You want."

"I thought you might have a few thoughts on the subject," he said.

"The decluttering conversation is always a hard job for a Realtor," said Maycott, who specializes in working with senior citizens, which is a good niche since he lives and works in The Villages, in Florida, the largest retirement community in the world with 80,000 homes inside 80 square miles.

"You don't want to offend or upset the homeowner," he continued, "but you also want to help them sell the home quickly for the best price. So you're walking on eggshells."

"I get it," I said. "How do you tell Mrs. McGillicuddy, who is 75, that it's time to let go of her son's boy scout uniform, which she has in a box with the dead corsage she wore to senior prom."

"Real estate agents have to be sociologists, psychologists, archaeologists and diplomats."

So I cobbled together my best advice to help this group help their older clients to cross the bridge between being stuck in the past and embracing a lighter, better future. Here are some tips that maybe a senior you know can use, too:

◼️ Know what hurdles you face. Remember that for senior citizens thinking of moving, letting go isn't just about sorting through physical stuff but also psychological freight. Sorting through a household makes us face the passage of time, where we've been, where we are in life, successes and regrets, our mortality. Gently remind them that living in the past robs you of the present. And that nature shows us everywhere that to grow, living things must shed.

◼️ Reframe the move. They are not downsizing; they're "rightsizing." That reframing is not only true, but it also removes the idea that moving to a smaller house and living with less is somehow a demotion. It's not.

◼️ Highlight the pluses. Not to put too big a bow on this, because shedding is hard, but one reason so many retirees can't let go and move forward is because they can't see what's ahead. Help them picture what their new life will look like, and visualize the upside of "rightsizing." Point out how much better their quality of life will be when they have to care for no more house than they need, and have less yard to maintain. The move could free up capital, so they can enjoy life more. For those who want to travel, it will be much easier to lock up and go. And when they've done the hard work of purging and cleaning house, they will be giving their heirs an enormous gift. (Believe me.)

◼️ Point out the practical. Decluttered houses show and sell better. Period. Maycott tells potential sellers flat out, "We're going to need to move some things, or put them somewhere else, because we want the house to feel bigger." Hard to argue with that.

◼️ Let go in stages. Suggest that, before the sellers list their house, they purge what they can, then box up what they're not using: extra linens, dishes, clothes, books. That will make cabinets and closets look spacious, and help buyers see the house, not the stuff. Move those boxed items neatly into the garage or into a temporary rented pod. (Not, have mercy, a storage facility.) Once the house sells, they can revisit these items. After having lived with less, they may realize they don't need these items at all.

◼️ Set an example. Share your own stories. Maycott, for instance, tells sellers to just do what he did. He and his wife, both 61, moved to the Villages from Atlanta six years ago from a 3,600 square-foot house into 1600-square feet. "We asked our grown children if they wanted anything. Each took a few things. We tagged what was going to Florida, and put the rest in a garage sale. What was left went to charity. It worked very well for us." If only it were always that easy.