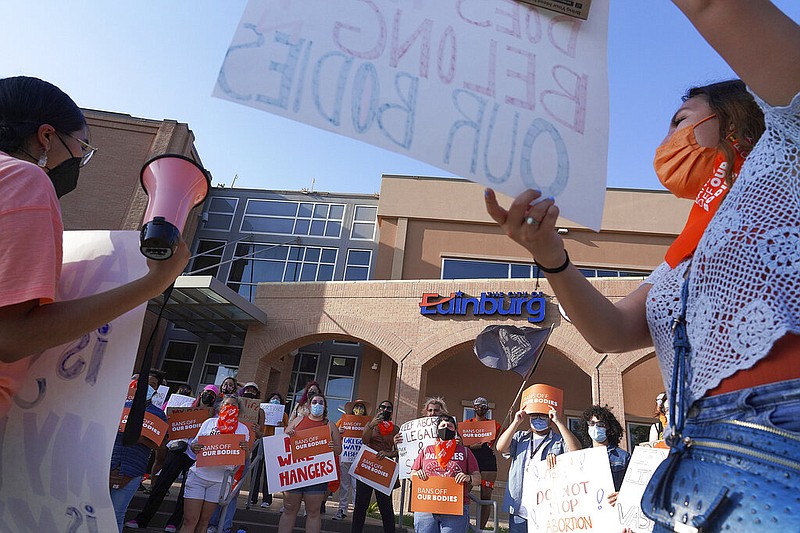 Abortion rights supporters gather to protest Texas' six-week abortion ban in front of Edinburg (Texas) City Hall on Wednesday, Sept. 1, 2021. The nation's most far-reaching curb on abortions since they were legalized a half-century ago took effect Wednesday in Texas. (Joel Martinez/The Monitor via AP)

SIOUX FALLS, S.D. -- Republican states that have passed increasingly tough abortion restrictions only to see them blocked by the federal courts have a new template in an unusually written Texas law that represents the most far-reaching curb on abortions in nearly half a century.

Republican lawmakers in at least half a dozen states said they planned to introduce bills using the Texas law as a model, hoping it provides a pathway to enacting the kind of abortion crackdown they have sought for years.

"I think most conservative states in the South will look at this inaction by the court and will see that as perhaps a chance to move on that issue," he said.

The Texas law, which took effect Wednesday, prohibits abortions once medical professionals can detect cardiac activity, usually around six weeks, before many women know they're pregnant. While a dozen states have tried to enact bans early in pregnancy, those laws have been blocked by courts.

Planned Parenthood said 85% to 90% of women who obtain abortions in Texas are at least six weeks into pregnancy.

[Video not showing up above? Click here to watch » arkansasonline.com/94ruling/]

Texas may have found an end-run around the federal courts by enacting an unusual enforcement scheme that authorizes private citizens to file lawsuits in state court against abortion providers and anyone involved in aiding an abortion, including someone who drives a woman to a clinic. The law includes a minimum award of $10,000 for a successful lawsuit, but does not have government officials criminally enforce the law.

President Joe Biden on Friday denounced Texas' new law and said it creates a "vigilante system" under which private citizens are empowered to police the ban.

And late Friday in a narrow ruling, a state judge shielded Texas abortion clinics from lawsuits by an anti-abortion group for now.

The temporary restraining order by state District Judge Maya Guerra Gamble in Austin in response to the Planned Parenthood request does not interfere with the law except to shield clinics from whistleblower lawsuits by the nonprofit group Texas Right to Life, its legislative director and 100 unidentified people.

A hearing on a preliminary injunction request was set for Sept. 13.

The order "offers protection to the brave health care providers and staff at Planned Parenthood health centers throughout Texas, who have continued to offer care as best they can within the law while facing surveillance, harassment, and threats from vigilantes eager to stop them," Planned Parenthood spokeswoman Helene Krasnoff said in a statement.

However, the order will not deter Texas Right to Life's efforts, said Elizabeth Graham, the group's vice president. In a statement, the group said: "We expect an impartial court will dismiss Planned Parenthood's lawsuit. Until then, we will continue our diligent efforts to ensure the abortion industry fully follows" the new law.

In addition to Mississippi, GOP lawmakers and abortion opponents in at least five other Republican-controlled states -- Arkansas, Florida, Indiana, North Dakota and South Dakota -- said they were considering pushing bills similar to the Texas law and its citizen-enforcement provision.

"Even though you may have pro-life legislators, you do not always have pro-life bureaucrats who are willing to do enforcement inspections," said Indiana state Sen. Liz Brown, a Republican who has sponsored several anti-abortion bills adopted in recent years.

[Video not showing up above? Click here to watch » arkansasonline.com/94bidenroe/]

Republicans for years have turned to statehouses in conservative states to find new ways to erode abortion rights enshrined by the high court's 1973 Roe v. Wade decision. The Supreme Court -- at least for now -- has cleared a path forward for them.

"We're excited, and we really do think that the heartbeat bill strategy is working," said Blaine Conzatti, president of the Idaho Family Policy Center, which opposes abortions.

Idaho passed a law this year with similar restrictions to Texas, but it will take effect only if a U.S. appeals court upholds another state's law, a condition that has not been met.

Arkansas state Sen. Jason Rapert tweeted Thursday that he planned to file legislation mirroring Texas' law when lawmakers reconvene this fall. The Republican lawmaker sponsored a 2013 "heartbeat" abortion ban that was struck down by federal courts and another outright ban enacted this year that a federal judge has blocked.

In Tennessee, Stacy Dunn, president of Tennessee Right to Life, said she is hopeful the Supreme Court's decision to allow the Texas law to take effect means the court will rule to reverse Roe. Ten states, including Tennessee, have laws that would effectively outlaw most abortions should Roe v. Wade be overturned.

"This Texas law could be a ray of light at the end of a very long and dark tunnel, and our state is ready," Dunn said in a statement.

"Reproductive freedom in our state is built on case law," said New Jersey Gov. Phil Murphy, a Democrat, as he pushed for state lawmakers to enact a bill that would enshrine access to abortions.

"All of that case law is in turn built on the Supreme Court's decision on Roe v. Wade. If the foundation of that series of case laws is impacted, impaired, taken away, the entire reality in our state falls like a house of cards, which is why we need to, as soon as possible, put this protection into statute."

In New Mexico, Democratic state Rep. Patricia Roybal Caballero said she was angered by the Texas law because it might lead to underground abortion procedures that endanger women's lives.

Roybal Caballero, a "Catholic for choice" in her words, wants New Mexico to provide safe passage to anyone seeking medical care, including abortion procedures that she believes should be a matter of personal choice.

"We don't want to go back to the 1960s and 1970s underground days of illegal abortions," she said. "It's our decision. And if it's going to be our decision, it should be a safe and healthy outcome."

Biden's comments were his first public remarks on the matter. He has previously issued written statements decrying the law.

"I have been and continue to be a strong supporter of Roe v. Wade, No. 1," Biden said Friday. "And the most pernicious thing about the Texas law, it sort of creates a vigilante system where people get rewards to go out and to ... ." He did not finish the thought.

He added that "it's almost un-American, what we're talking about," emphasizing that he was referring to the Texas law and not to the broader debate over Roe.

"I was told that there are possibilities within the existing law to have the Justice Department look and see whether there are things that can be done that can limit the independent action of individuals in enforcing ... a state law," Biden said. "I don't know enough to give you an answer yet."

Biden, who is Catholic, has not made abortion a major issue, to the dismay of some abortion-rights activists. White House press secretary Jen Psaki said Thursday that Americans should "look at what the president does and his actions and what he fights for."

Psaki said Biden has asked his Cabinet secretaries to take a governmentwide look at how the administration could push back against the Texas law. The effort is being coordinated by the Gender Policy Council, a group Biden created in the White House to focus on women's rights.

But the president has not announced any particular action, and Psaki could not say whether he backs the Women's Health Protection Act, a bill in Congress to create a statutory right for health care professionals to provide abortions.

In his statement Thursday, Biden said the impact of the Supreme Court's decision not to block the Texas law "will be immediate and requires an immediate response."

He added that he was directing his administration to examine what steps the federal government can take "to ensure that women in Texas have access to safe and legal abortions as protected by Roe, and what legal tools we have to insulate women and providers from the impact of Texas' bizarre scheme of outsourced enforcement to private parties."

The Gender Policy Council, the White House Counsel's Office and officials from other parts of the Biden administration held a meeting on the issue Friday "with women's rights and reproductive health leaders," the White House said in a statement.

"Leaders shared recommendations for steps the federal government can take to ensure that all people in the U.S., including in Texas, have access to safe and legal abortions as protected by Roe and highlighted connections to racial equity, gender-based violence, and the maternal health crisis in the U.S.," the White House said.

After the Texas law took effect Wednesday, the state's largest anti-abortion group publicized a website that invited people to inform on violators.

The website, prolifewhistleblower.com, which was set up by Texas Right to Life, was designed to help carry out the new law. That's because the law places enforcement not in the hands of state officials but with private citizens, who are deputized to sue anyone who performs or aids an abortion in violation of the law.

Tips about the law's potential offenders quickly flooded into the website, which features an online form so people can anonymously submit reports of those who are illegally obtaining or facilitating abortions.

But some of the tips were a little unexpected.

Texas Gov. Greg Abbott, who was a leading proponent of the law, was a violator, according to some of the tips. The fictional characters from Marvel's Avengers were also apparently seeking abortions, the reports said. Other tips did not point to individuals but instead contained copies of the entire script to the 2007 animated film "Bee Movie."

The reports, which were obviously bogus, were the work of activists on TikTok, programmers, and Twitter and Reddit users who said they wanted to ensnare the site's administrators in fabricated data.

Kim Schwartz, a spokeswoman for Texas Right to Life, denied the website had been overwhelmed with false reports.

"We knew this would happen and we were prepared," she said. "Activists have been trying to spam and take down the site for a week and failed."

Even so, the group's website appeared to periodically buckle Thursday and drop under the load of reports, according to screenshots posted to Reddit and other sites.

Some on Twitter called for a boycott of GoDaddy, the company that hosts the Texas Right to Life tip site. They said the site violated GoDaddy's rules that prohibit customers from collecting or harvesting nonpublic information about anyone without their "prior written consent."

GoDaddy said late Thursday that it had given Texas Right to Life 24 hours to find a new hosting provider before cutting off service.