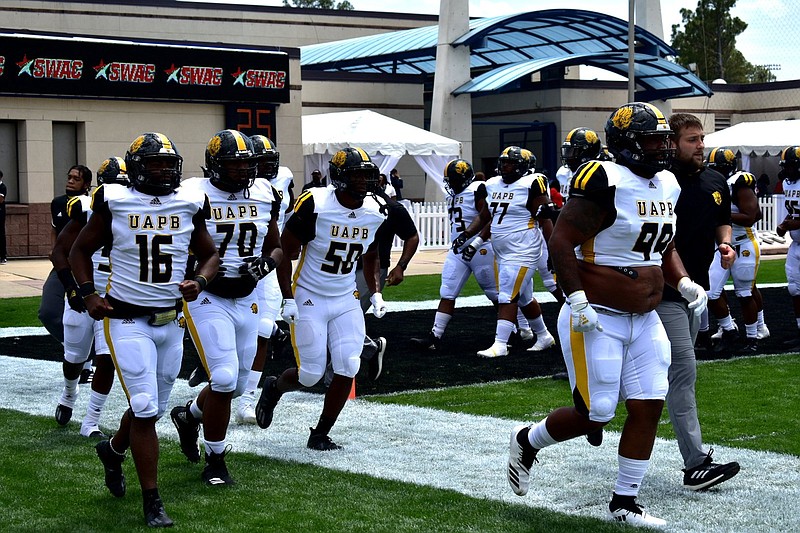 It ended the season 4-6 after starting 2-1. One of those losses was a 45-38 decision on homecoming day at the University of Arkansas at Pine Bluff -- a game in which Taeyler Porter ran 98 yards for the go-ahead score with 4:23 remaining.

For that reason, UAPB defensive coordinator Jonathan Bradley talked about his approach to tonight's season opener, set for 6 p.m. at Simmons Bank Field, with plenty of respect for the Division II Dragons, who last defeated the Golden Lions 40-37 in 2002.

"They came ... in 2019 and they gave us a good game," he said. "We have to come out and execute at a high level. They're a good program that is hungry and they're trying to come here and get a win. We're going to get their best shot. We're just trying to fly around and continue to execute."

The Lions have prepared for Lane "as best we could," UAPB Coach Doc Gamble said earlier this week, noting game video on the Jackson, Tenn.-based Dragons has been limited because their 2020 season was canceled as a precaution against covid-19.

"First games are always tough anyway," Gamble said. "It's a new team. You try to look back at what their personality was the last time you played, but it's still a new game. The way transfers are, I'm sure there are still a bunch of new pieces. You're not able to see what their personnel is and what they're doing schematically. It makes it tough on your preparation."

UAPB didn't have to wait very long from its last game that was played just four months and three days removed from a loss to Alabama A&M University in the Southwestern Athletic Conference championship game.

Most of the Lions' starters on both sides of the football have returned, including their entire offensive line headlined by left tackle Mark Evans II. Quarterback Skyler Perry is going into his fourth season as a starter and he has his usual targets in Tyrin Ralph and Josh Wilkes.

Gamble went into preseason camp needing to fill in a question mark at running back, with the departure of freshman Mattias Clark. Watson Chapel graduate Omar Allen, who split time with Clark, has returned.

The head coach plans to reach deep into his roster for more potential rushing threats.

"I'm anxious to see the guys who played in the spring," Gamble said. "All of them have been impressive. Our running back situation has improved with Kayvon Britten and Kierre Crossley."

Britten is a true freshman from Cincinnati. Crossley is a senior transfer from the University of Central Arkansas.

"Now it's just seeing them under the lights against another opponent. It'll be a tell tale sign," Gamble said.

Nearly each of the Golden Lions have been vaccinated against covid-19 as kickoff approaches.

Campus officials confirmed 98% of the players have taken the vaccine. Athletic department and university officials do not require players to take shots, but under conference policy, a player that tests positive for covid-19 must be quarantined for 14 days and unvaccinated players must undergo more frequent testing than vaccinated players each week.

The Dragons trail the Golden Lions 22-2-1 in the all-time series, which endured a hiatus from 2003-18. Tonight's game marks Vyron Brown's head coaching debut after serving as offensive coordinator in 2019.

While Simmons Bank Field's 16,000-seat capacity will not be restricted, UAPB announced all fans are required to wear face masks.

A clear bag policy for attendance will also be enforced.

ALSO IN THE SWAC

Mississippi Valley State opened its season Thursday with a 35-0 loss to Murray State.